West's strength might be its weakness in AI world 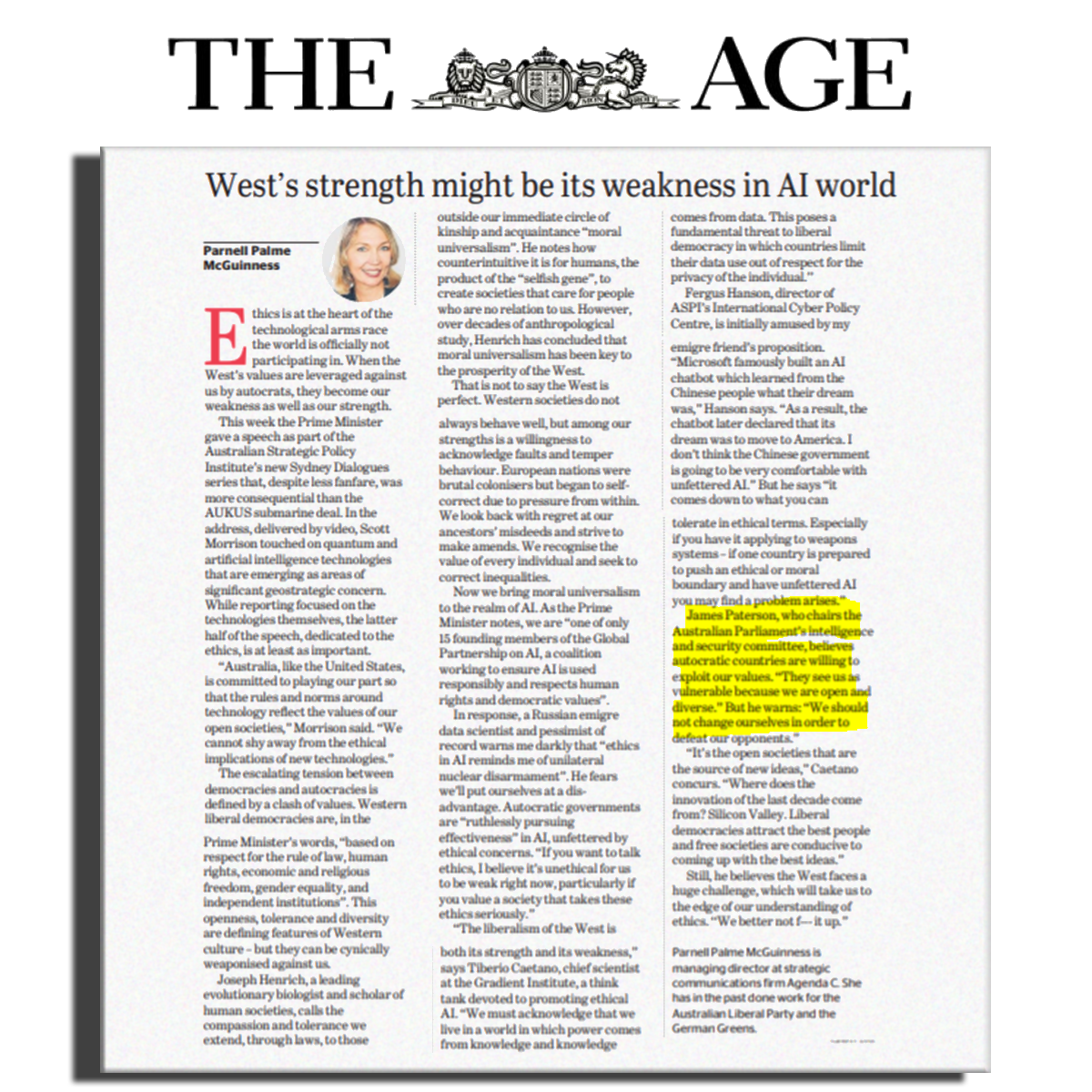 Ethics is at the heart of the technological arms race the world is officially not participating in. When the values of the West are leveraged against us by autocrats, they become our weakness as well as our strength.

This week the Prime Minister gave a speech as part of the Australian Strategic Policy Institute’s new Sydney Dialogues series that, while accompanied by less fanfare, was more consequential than the AUKUS submarine deal. In the 20-minute address, delivered by video, Scott Morrison touched on the quantum and artificial intelligence technologies that are emerging as the areas of significant geostrategic concern. While reporting of the speech has focused on the technologies themselves, the latter half of the speech, dedicated to the ethics of emerging technologies, is at least as important.

“Australia, like the United States, is committed to playing our part so that the rules and norms around technology reflect the values of our open societies,” Morrison said. “We cannot shy away from the ethical implications of new technologies.”

The escalating tension between democratic cultures and autocracies is defined by a clash of values. Western liberal democracies are, in the Prime Minister’s words, “based on respect for the rule of law, human rights, economic and religious freedom, gender equality, and independent institutions”. These standards, this openness, tolerance, diversity, and the willingness to confront and examine our own faults, are defining features of Western culture – but they can be cynically weaponised against us.

Joseph Henrich, a leading evolutionary biologist and scholar of human societies, calls the compassion and tolerance we extend, through laws, to those outside our immediate circle of kinship and acquaintance “moral universalism”. He notes how counterintuitive it is for human beings, the product of the “selfish gene”, to create societies that care for people who are no relation to us. However, over decades of anthropological study, Henrich has concluded that moral universalism has been key to the prosperity of the West.

That is not to say the West is perfect. Western societies do not always behave well, but among our strengths is the willingness to acknowledge our faults and temper our behaviour. European nations, for instance, were brutal colonisers. But they also began to self-correct due to pressure from within. We look back with regret at the misdeeds of our ancestors and strive to make amends. We recognise the value of every individual and consequently seek to correct inequalities and to be more humane.

Now we are bringing our moral universalism to the realm of artificial intelligence. As the Prime Minister notes, we are “one of only 15 founding members of the Global Partnership on AI, a coalition working to ensure AI is used responsibly and respects human rights and democratic values”.

In response, a Russian emigre data scientist and pessimist of record warns me darkly that “ethics in AI reminds me of unilateral nuclear disarmament”. We will, he believes, be putting ourselves at a considerable disadvantage. In his view, autocratic governments are “ruthlessly pursuing effectiveness” in AI, unfettered by ethical concerns. “If you want to talk ethics, I believe it’s unethical for us to be weak right now,” he says, “particularly if you value a society that takes these ethics seriously.”

“The liberalism of the West is both its strength and its weakness,” says Tiberio Caetano, chief scientist at the Gradient Institute, a think tank devoted to considering and promoting ethical AI. “We must acknowledge that we live in a world in which power comes from knowledge and knowledge comes from data. This poses a fundamental threat to liberal democracy in which countries limit their data use out of respect for the privacy of the individual.”

Fergus Hanson, director of ASPI’s International Cyber Policy Centre, is initially amused by my emigre friend’s proposition that the ethical framework of the West could be its undoing in the face of emerging AI. “Microsoft famously built an AI chatbot which learned from the Chinese people what their dream was,” Hanson says. “As a result, the chatbot later declared that its dream was to move to America. I don’t think the Chinese government is going to be very comfortable with unfettered AI.”

But he also reflects that, “With a lot of these critical technologies it comes down to what you can tolerate in ethical terms. Especially if you have it applying to weapons systems – if one country is prepared to push an ethical or moral boundary and have unfettered AI you may find a problem arises.”

James Paterson, who chairs the Australian Parliament’s intelligence and security committee, believes autocratic countries are willing to exploit our values. “They certainly see our empathy as our weakness,” says the Liberal senator. “They see us as vulnerable because we are open and diverse.” But Paterson emphasises that, in countering threats, we must not lose sight of our own values. “We should not change ourselves in order to defeat our opponents,” he says.

“It’s the open societies that are the source of new ideas,” Caetano concurs. “Where does the innovation of the last decade come from? Silicon Valley. Liberal democracies attract the best people and free societies are conducive to coming up with the best ideas.”

Still, he believes that the West is facing a monumental challenge, which will take us to the edge of our understanding of ethics. “The ethics of AI is an ultra-complex subject,” he sighs. “We better not f--- it up.”