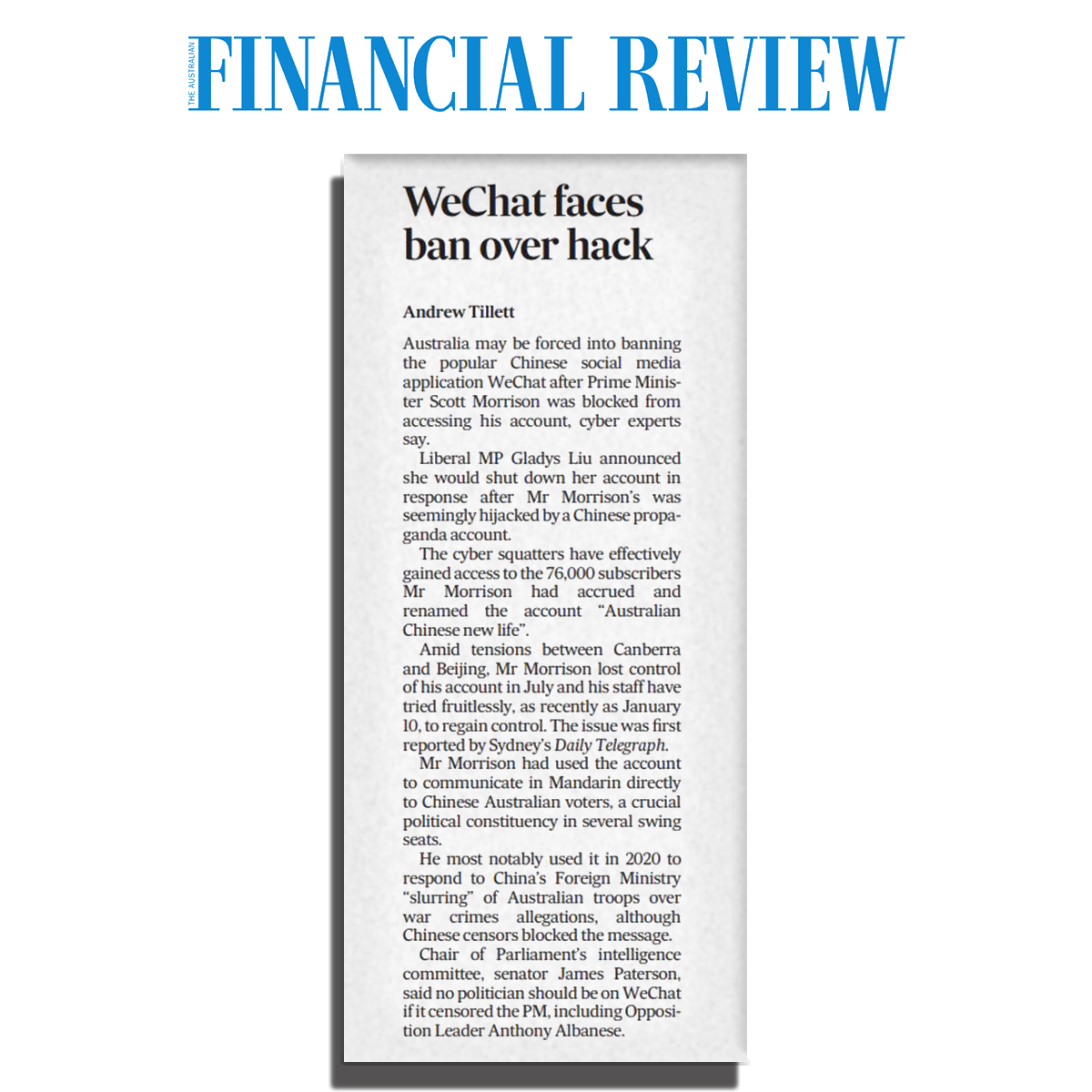 WeChat’s owner, Tencent, on Monday night issued a statement saying it was investigating the apparent “hijacking” of Mr Morrison’s account.

“Based on our information, this appears to be a dispute over account ownership — the account in question was originally registered by a PRC [People’s Republic of China] individual and was subsequently transferred to its current operator, a technology services company — and it will be handled in accordance with our platform rules,” the company said in a statement.

“Tencent is committed to upholding the integrity of our platform and the security of all users accounts, and we will continue to look into this matter.”

Mr Morrison’s media team, like many other people and organisations based outside of China, used a Chinese agency to register the account.

The cyber squatters have effectively gained access to the 76,000 subscribers Mr Morrison had accrued and renamed the account “Australian Chinese new life”.

Amid tensions between Canberra and Beijing, Mr Morrison lost control of his account in July and his staff have tried fruitlessly, as recent as January 10, to regain control. The issue was first reported by Sydney’s Daily Telegraph newspaper.

Mr Morrison had used the account to communicate in Mandarin directly to Chinese Australian voters, a crucial political constituency in several swing seats.

He most notably used it in 2020 to respond to China’s Foreign Ministry “slurring” of Australian troops over war crimes allegations, although Chinese censors blocked the message at that time.

Chair of Parliament’s intelligence committee, Senator James Paterson, said no Australian politician should be on WeChat if it censored the PM, including Opposition leader Anthony Albanese.

“So what the Chinese government has done by shutting down the Prime Minister’s account is effectively foreign interference in our democracy and in an election year,” Senator Paterson told 2GB.

Liberal MP Gladys Liu announced she would shut down her account in response.

Ms Liu said: “It is a matter of record that the platform has stopped the Prime Minister’s access, while Anthony Albanese’s account is still active featuring posts criticising the government.”

Mr Albanese said it was concerning Mr Morrison had lost control of his account and he was happy to discuss the matter with the PM and national security agencies, although stressed it should not be treated as a “political football”.

“If they were serious about it, then someone would have picked up the phone,” Mr Albanese said.

Internet 2.0 chief executive Robert Potter, a top cyber security expert, said no other politician had suffered a similar fate as Mr Morrison as having their account taken over, with Chinese tech giants simply banning voices they disagreed with.

He said if WeChat did not relent, he predicted Australia could ban the company and remove the app from the Google and Apple stores.

“It would be very straightforward for the government to make the distribution of WeChat in Australia impossible,” he said.

“If we can’t find a way to engage with Chinese controlled platforms without accepting their controls around censorship, we are probably heading for a break.”

Mr Potter said the “Australian Chinese new life” account had not posted original content and had simply reposted links back to Chinese news websites, making it simply a propaganda account.

“The Chinese government has greater control over media in Chinese than any institution has in the English language, be it the Murdoch press or public broadcasters,” he said.