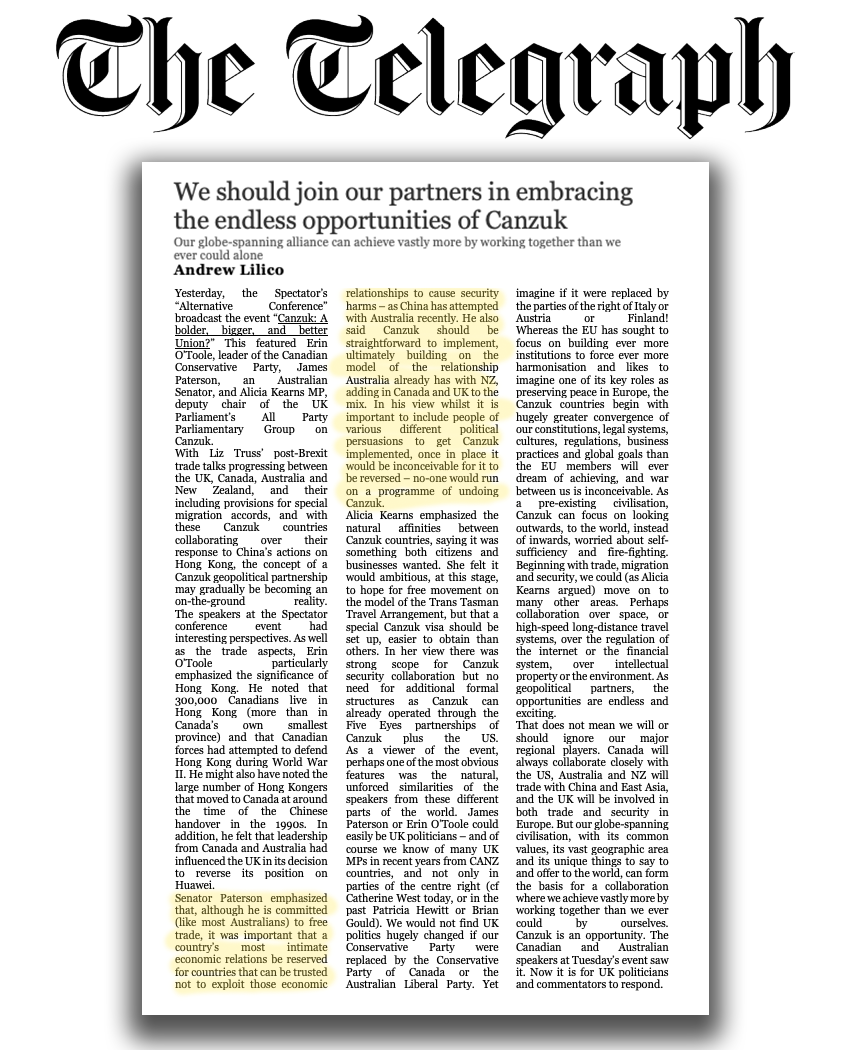 Yesterday, the Spectator’s “Alternative Conference” broadcast the event “Canzuk: A bolder, bigger, and better Union?” This featured Erin O’Toole, leader of the Canadian Conservative Party, James Paterson, an Australian Senator, and Alicia Kearns MP, deputy chair of the UK Parliament’s All Party Parliamentary Group on Canzuk.With Liz Truss’ post-Brexit trade talks progressing between the UK, Canada, Australia and New Zealand, and their including provisions for special migration accords, and with these Canzuk countries collaborating over their response to China’s actions on Hong Kong, the concept of a Canzuk geopolitical partnership may gradually be becoming an on-the-ground reality.The speakers at the Spectator conference event had interesting perspectives. As well as the trade aspects, Erin O’Toole particularly emphasized the significance of Hong Kong. He noted that 300,000 Canadians live in Hong Kong (more than in Canada’s own smallest province) and that Canadian forces had attempted to defend Hong Kong during World War II. He might also have noted the large number of Hong Kongers that moved to Canada at around the time of the Chinese handover in the 1990s. In addition, he felt that leadership from Canada and Australia had influenced the UK in its decision to reverse its position on Huawei.Senator Paterson emphasized that, although he is committed (like most Australians) to free trade, it was important that a country’s most intimate economic relations be reserved for countries that can be trusted not to exploit those economic relationships to cause security harms – as China has attempted with Australia recently. He also said Canzuk should be straightforward to implement, ultimately building on the model of the relationship Australia already has with NZ, adding in Canada and UK to the mix. In his view whilst it is important to include people of various different political persuasions to get Canzuk implemented, once in place it would be inconceivable for it to be reversed – no-one would run on a programme of undoing Canzuk.Alicia Kearns emphasized the natural affinities between Canzuk countries, saying it was something both citizens and businesses wanted. She felt it would ambitious, at this stage, to hope for free movement on the model of the Trans Tasman Travel Arrangement, but that a special Canzuk visa should be set up, easier to obtain than others. In her view there was strong scope for Canzuk security collaboration but no need for additional formal structures as Canzuk can already operated through the Five Eyes partnerships of Canzuk plus the US.As a viewer of the event, perhaps one of the most obvious features was the natural, unforced similarities of the speakers from these different parts of the world. James Paterson or Erin O’Toole could easily be UK politicians – and of course we know of many UK MPs in recent years from CANZ countries, and not only in parties of the centre right (cf Catherine West today, or in the past Patricia Hewitt or Brian Gould). We would not find UK politics hugely changed if our Conservative Party were replaced by the Conservative Party of Canada or the Australian Liberal Party. Yet imagine if it were replaced by the parties of the right of Italy or Austria or Finland!Whereas the EU has sought to focus on building ever more institutions to force ever more harmonisation and likes to imagine one of its key roles as preserving peace in Europe, the Canzuk countries begin with hugely greater convergence of our constitutions, legal systems, cultures, regulations, business practices and global goals than the EU members will ever dream of achieving, and war between us is inconceivable. As a pre-existing civilisation, Canzuk can focus on looking outwards, to the world, instead of inwards, worried about self-sufficiency and fire-fighting.Beginning with trade, migration and security, we could (as Alicia Kearns argued) move on to many other areas. Perhaps collaboration over space, or high-speed long-distance travel systems, over the regulation of the internet or the financial system, over intellectual property or the environment. As geopolitical partners, the opportunities are endless and exciting.That does not mean we will or should ignore our major regional players. Canada will always collaborate closely with the US, Australia and NZ will trade with China and East Asia, and the UK will be involved in both trade and security in Europe. But our globe-spanning civilisation, with its common values, its vast geographic area and its unique things to say to and offer to the world, can form the basis for a collaboration where we achieve vastly more by working together than we ever could by ourselves.Canzuk is an opportunity. The Canadian and Australian speakers at Tuesday’s event saw it. Now it is for UK politicians and commentators to respond.