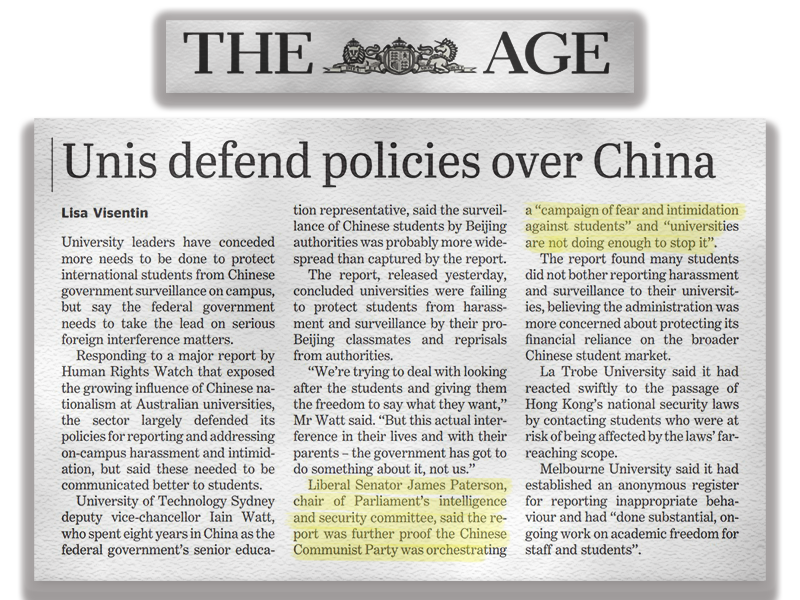 University leaders have conceded more needs to be done to protect international students from Chinese government surveillance on campus, but say the federal government needs to take the lead on serious foreign interference matters.Responding to a major report by Human Rights Watch that exposed the growing influence of Chinese nationalism at Australian universities, the sector largely defended its existing policies for reporting and addressing on-campus harassment and intimidation, but said these needed to be communicated better to students.

University of Technology Sydney deputy vice-chancellor Iain Watt, who spent eight years in China as the federal government’s senior education representative, said the surveillance of Chinese students by Beijing authorities was probably more widespread than captured by the report.The report, released on Wednesday and based on interviews with 24 pro-democracy Chinese students and 22 academics at universities across the country, concluded universities were failing to protect students from harassment and surveillance by their pro-Beijing classmates and reprisals from authorities. A number of students said their campus activities had resulted in their parents in China being hauled into police stations.

“I’m pretty confident that this has been going on ever since Chinese students have been in the country — it’s just increased,” Mr Watt said.

“We’re trying to deal with looking after the students and giving them the freedom to say what they want. But this actual interference in their lives and with their parents — the government has got to do something about it, not us.”

This sentiment was echoed by the Group of Eight — the lobby group representing Australia’s elite research universities, which said “the primary responsibility for monitoring the actions of foreign governments on Australian soil lies with the Australian government and its agencies, not universities”.Liberal Senator James Paterson, chair of Parliament’s powerful intelligence and security committee, said the report was further proof the Chinese Communist Party was orchestrating a “campaign of fear and intimidation against students” and “universities are not doing enough to stop it”.The report found many students did not bother reporting their experiences of harassment and surveillance to their universities, believing the administration was more concerned about protecting its financial reliance on the broader Chinese student market.Universities approached on Wednesday said they were already taking measures to address these issues. La Trobe University, for example, said it had reacted swiftly to the passage of Hong Kong’s national security laws by contacting students who were at risk of being affected by the laws’ far-reaching scope.Melbourne University said it had established an anonymous register for reporting inappropriate behaviour and had “done substantial, ongoing work on academic freedom for staff and students”.University of NSW deputy vice-chancellor George Williams said it was clear there was more work to be done in protecting students, but support was needed from Australia’s national security agencies.“We really need help in this area,” Professor Williams said. “It will often be the case that universities aren’t fully aware of what surveillance has been used, what methodologies and the risk posed to some of our students. The security services have that expertise.”He said universities needed to speak directly with international students about the existing reporting mechanisms in order to restore trust their complaints will be acted upon.“Unless they are involved and they feel confident, it doesn’t matter what processes you have in place, they just don’t work,” he said.The report’s findings will also be considered by the University Foreign Interference Taskforce - the body comprising academic leaders and government security officials.