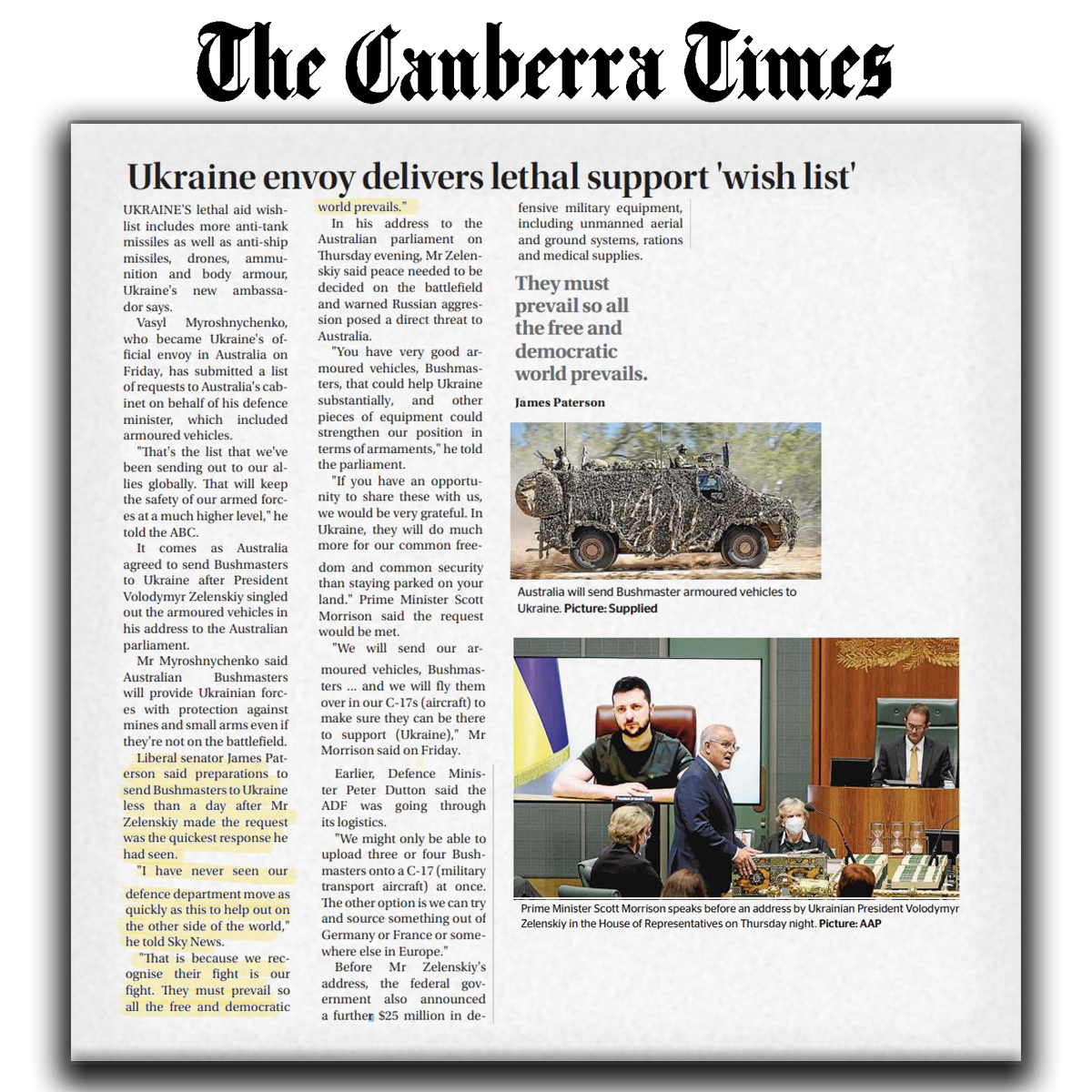 Vasyl Myroshnychenko, who became Ukraine's official envoy in Australia on Friday, has submitted a list of requests to Australia's cabinet on behalf of his defence minister, which included armoured vehicles.

"That's the list that we've been sending out to our allies globally. That will keep the safety of our armed forces at a much higher level," he told the ABC.

It comes as Australia agreed to send Bushmasters to Ukraine after President Volodymyr Zelenskiy singled out the armoured vehicles in his address to the Australian parliament.

Mr Myroshnychenko said Australian Bushmasters will provide Ukrainian forces with protection against mines and small arms even if they're not on the battlefield.

Liberal Senator James Paterson said preparations to send Bushmasters to Ukraine less than a day after Mr Zelenskiy made the request was the quickest response he has seen.

"I have never seen our defence department move as quickly as this to help out on the other side of the world," he told Sky News.

"That is because we recognise their fight is our fight. They must prevail so all the free and democratic world prevails."

In his address to the Australian parliament on Thursday evening, Mr Zelenskiy said peace needed to be decided on the battlefield and warned Russian aggression posed a direct threat to Australia.

"You have very good armoured vehicles, Bushmasters, that could help Ukraine substantially, and other pieces of equipment could strengthen our position in terms of armaments," he told the parliament.

"If you have an opportunity to share these with us, we would be very grateful. In Ukraine, they will do much more for our common freedom and common security than staying parked on your land."

Prime Minister Scott Morrison said the request would be met.

"We will send our armoured vehicles, Bushmasters ... and we will fly them over in our C-17s (aircraft) to make sure they can be there to support (Ukraine)," Mr Morrison told reporters in Sydney on Friday.

"Australia - half a world away - has been at the leading edge of providing support and as they keep asking and they keep working with us to define what they need to save their country, we will continue to support them."

Earlier, Defence Minister Peter Dutton said the ADF was going through its logistics.

"We might only be able to upload three or four Bushmasters onto a C-17 (military transport aircraft) at once. The other option is we can try and source something out of Germany or France or somewhere else in Europe."

The defence minister noted timelines did not allow for the usual process of sending the vehicles by ship.

Before Mr Zelenskiy's address, the federal government also announced a further $25 million in defensive military equipment for the besieged nation.

"Ukraine and Australia are separated by half the earth. Our languages, accents, histories and cultures are different but we share an affinity for democracy or freedom," Mr Morrison told the president and the parliament.

"Mr President, you have our praise. But you also have our weapons, our humanitarian aid, our sanctions against those who seek to deny your freedom."

"As you stand up to this latest tyrant, you are showing us what true courage is," Mr Albanese said.

"It is the courage that is embodied by you (President Zelenskiy). You are fighting for your country and your people."