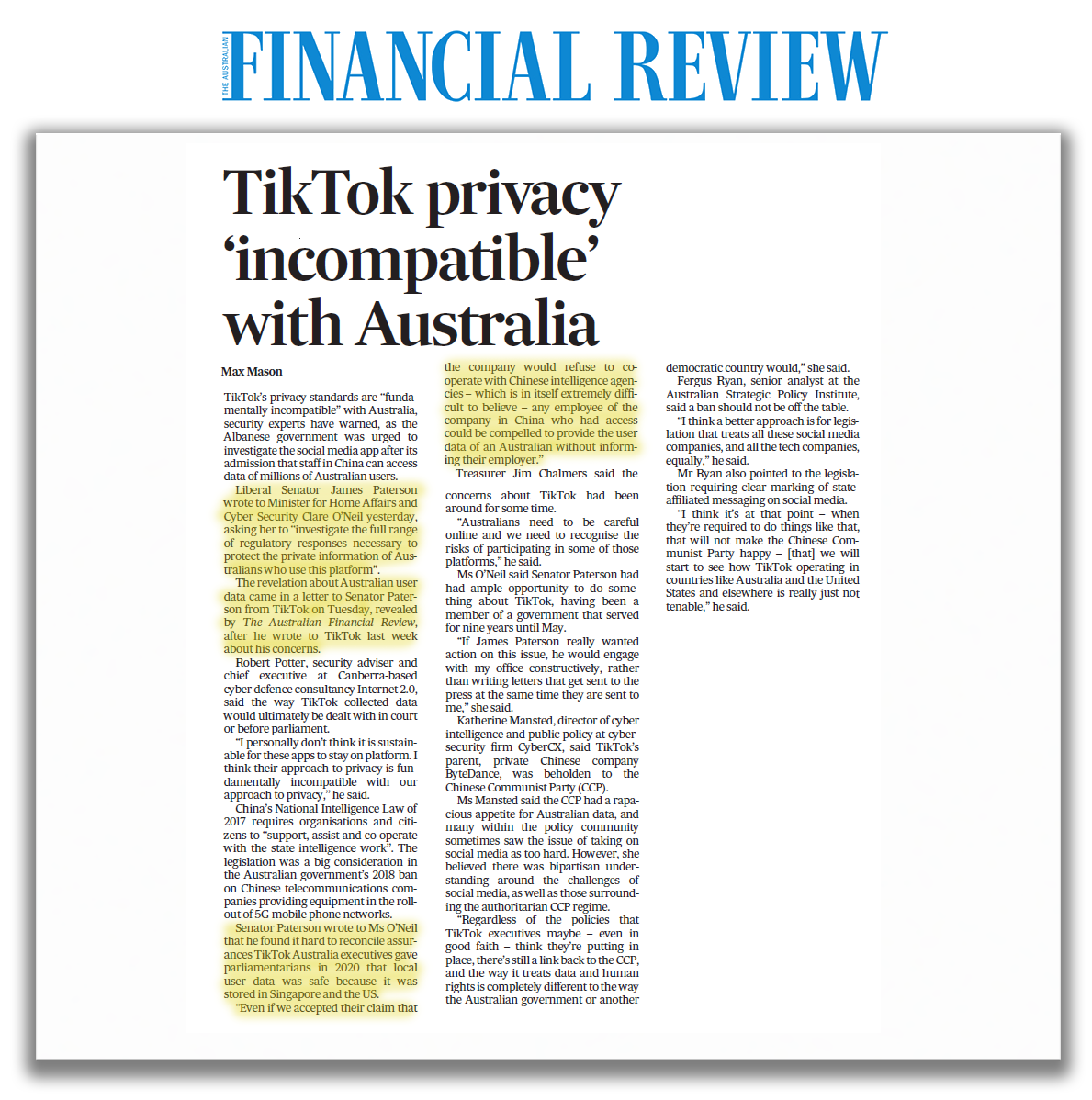 TikTok’s privacy standards are “fundamentally incompatible” with Australia, security experts warn, as the Albanese government is urged to investigate the social media app following its admission staff in China can access data of millions of Australian users.

Liberal Senator James Paterson wrote to Minister for Home Affairs and Cyber Security Clare O’Neil on Wednesday, asking her to “investigate the full range of regulatory responses necessary to protect the private information of Australians who use this platform.”

The revelation about Australian user data came in a letter to Senator Paterson from TikTok on Tuesday, revealed by this masthead, after he wrote to TikTok last week about his concerns.

Robert Potter, security adviser and chief executive at Canberra-based cyber defence consultancy Internet 2.0, said the way TikTok collects data will, ultimately, be dealt with in court, or before parliament.

“China uses a thousand-grains-of-sands approach to collecting intelligence. It would rather have it and not need it, than need it and not have it. Their mentality is collect by default.”

China’s National Intelligence Law of 2017 requires organisations and citizens to “support, assist and co-operate with the state intelligence work”. The legislation was a major consideration for the Australian government’s 2018 ban of Chinese telecommunications companies, including Huawei and ZTE, from providing equipment in the rollout of 5G mobile phone networks.

Warning to Aussie users
‍
Senator Paterson wrote to Minister O’Neil that he found it hard to reconcile assurances TikTok Australia executives gave parliamentarians in 2020 that local user data was safe because it was stored in Singapore and the US.

“I have no confidence it remains outside the reach of the Chinese government. Numerous national security laws ... require the co-operation of individual citizens and entities including companies with Chinese intelligence services, and for that co-operation to be kept secret,” he wrote.

“Even if we accepted their claim that the company would refuse to co-operate with Chinese intelligence agencies – which is in itself extremely difficult to believe – any employee of the company in China who had access could be compelled to provide the user data of an Australian without informing their employer.”

Federal treasurer Jim Chalmers said the concerns about TikTok had been around for some time.

“We take advice from our various national security agencies when it comes to the use and safety online of various social media platforms. Australians need to be careful online and we need to recognise the risks of participating in some of those platforms,” he said.

Minister O’Neil said Senator Paterson has had ample opportunity to do something about TikTok having been a member of a government that served for nine years until May.

“If James Paterson really wanted action on this issue, he would engage with my office constructively, rather than writing letters that get sent to the press at the same time they are sent to me,” she said in a statement.

“It is not the way the Albanese Government will be deliberating over national security issues.”

TikTok Australia director of public policy Brent Thomas said in his reply letter to senator Paterson: “There are strict protocols in place to protect Australian user data. Australian user data is stored in Singapore and the US. Our security teams minimise the number of people who have access to data and limit it only to people who need that access in order to do their jobs.

Ms Mansted said the CCP has a rapacious appetite for Australian data, and many within the policy community sometimes see the issue of taking on social media as too hard, although she believes there is bipartisan momentum and understanding around the challenges of social media, as well as those surrounding the authoritarian CCP regime.

“Regardless of the policies that TikTok executives maybe – even in good faith – think they’re putting in place, there’s still a link back to the CCP, and the way it treats data and human rights is completely different to the way the Australian government, or another democratic country would,” she said.

In 2018, then-ByteDance chief executive Zhang Yiming, in a public apology when the company drew the ire of the CCP, said: “We have put too much emphasis on the role of technology, but have not realised that technology must be guided by socialist core values, spread positive energy, meet the requirements of the times, and respect public order and good customs.“

Fergus Ryan, senior analyst at the Australian Strategic Policy Institute (ASPI), said a ban shouldn’t be off the table, but it was a blunt policy instrument, noting the Trump administration’s failed attempt to ban TikTok in the US.

“ I think a better approach is for legislation that treats all these social media companies, and all the tech companies, equally.”

“There is precedent here, TikTok has labelled some accounts Russian state-affiliated media. But as far as I know, they haven’t done that for China,” he said.

“I think it’s at that point – when they’re required to do things like that, that will not make the Chinese Communist Party happy – will be when we start to see how TikTok operating in countries like Australia and the United States and elsewhere, is really just not tenable,” Mr Ryan said.