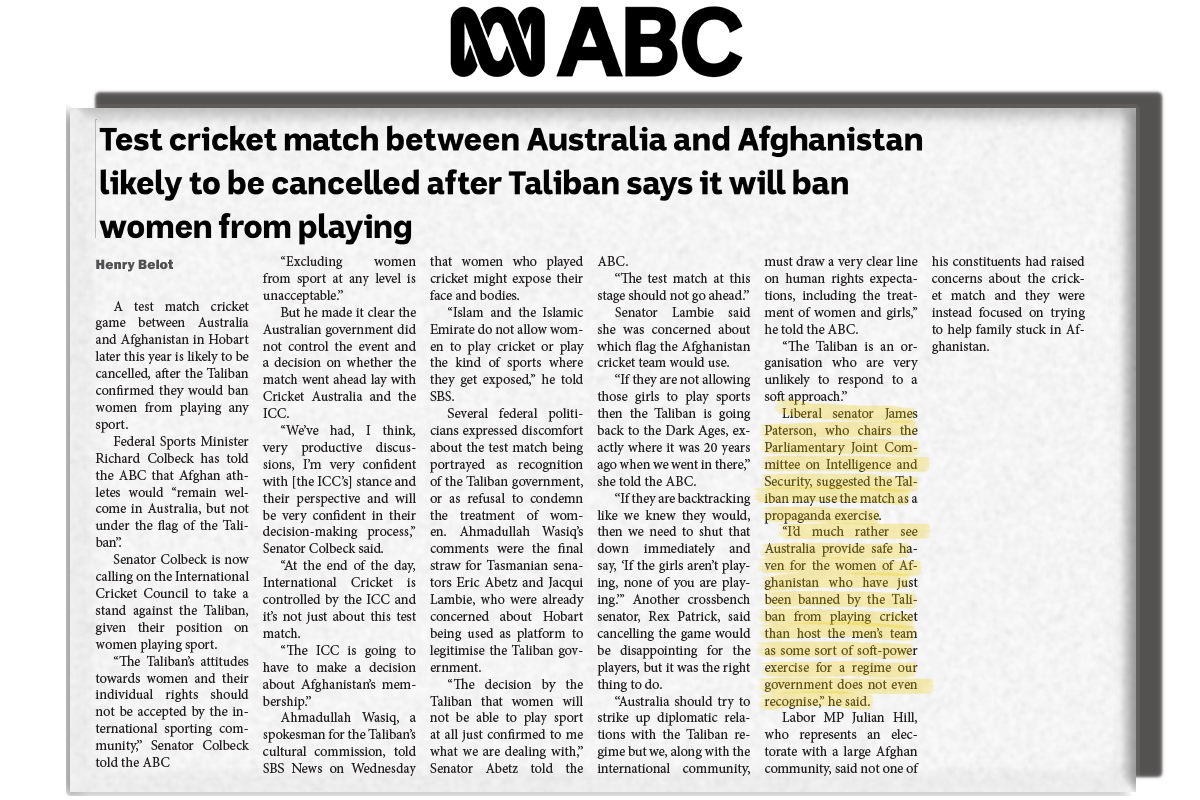 A test match cricket game between Australia and Afghanistan in Hobart later this year is likely to be cancelled, after the Taliban confirmed they would ban women from playing any sport.

Federal Sports Minister Richard Colbeck has told the ABC that Afghan athletes would "remain welcome in Australia, but not under the flag of the Taliban".

Senator Colbeck is now calling on the International Cricket Council to take a stand against the Taliban, given their position on women playing sport.

"The Taliban's attitudes towards women and their individual rights should not be accepted by the international sporting community," Senator Colbeck told the ABC

"Excluding women from sport at any level is unacceptable."

But he made it clear the Australian government did not control the event and a decision on whether the match went ahead lay with Cricket Australia and the ICC.

"We've had, I think, very productive discussions, I'm very confident with [the ICC's] stance and their perspective and will be very confident in their decision-making process," Senator Colbeck said.

"At the end of the day, International Cricket is controlled by the ICC and it's not just about this test match.

"The ICC is going to have to make a decision about Afghanistan's membership."

Ahmadullah Wasiq, a spokesman for the Taliban's cultural commission, told SBS News on Wednesday that women who played cricket might expose their face and bodies.

"Islam and the Islamic Emirate do not allow women to play cricket or play the kind of sports where they get exposed," he told SBS.

Several federal politicians expressed discomfort about the test match being portrayed as recognition of the Taliban government, or as refusal to condemn the treatment of women.

Ahmadullah Wasiq's comments were the final straw for Tasmanian senators Eric Abetz and Jacqui Lambie, who were already concerned about Hobart being used as platform to legitimise the Taliban government.

"The decision by the Taliban that women will not be able to play sport at all just confirmed to me what we are dealing with," Senator Abetz told the ABC.

"The test match at this stage should not go ahead."

Senator Lambie said she was concerned about which flag the Afghanistan cricket team would use.

"If they are not allowing those girls to play sports then the Taliban is going back to the Dark Ages, exactly where it was 20 years ago when we went in there," she told the ABC.

"If they are backtracking like we knew they would, then we need to shut that down immediately and say, 'If the girls aren't playing, none of you are playing.'"

Another crossbench senator, Rex Patrick, said cancelling the game would be disappointing for the players, but it was the right thing to do.

"Australia should try to strike up diplomatic relations with the Taliban regime but we, along with the international community, must draw a very clear line on human rights expectations, including the treatment of women and girls," he told the ABC.

"The Taliban is an organisation who are very unlikely to respond to a soft approach."

Liberal senator James Paterson, who chairs the Parliamentary Joint Committee on Intelligence and Security, suggested the Taliban may use the match as a propaganda exercise.

"I'd much rather see Australia provide safe haven for the women of Afghanistan who have just been banned by the Taliban from playing cricket than host the men's team as some sort of soft-power exercise for a regime our government does not even recognise," he said.

Labor MP Julian Hill, who represents an electorate with a large Afghan community, said not one of his constituents had raised concerns about the cricket match and they were instead focused on trying to help family stuck in Afghanistan.