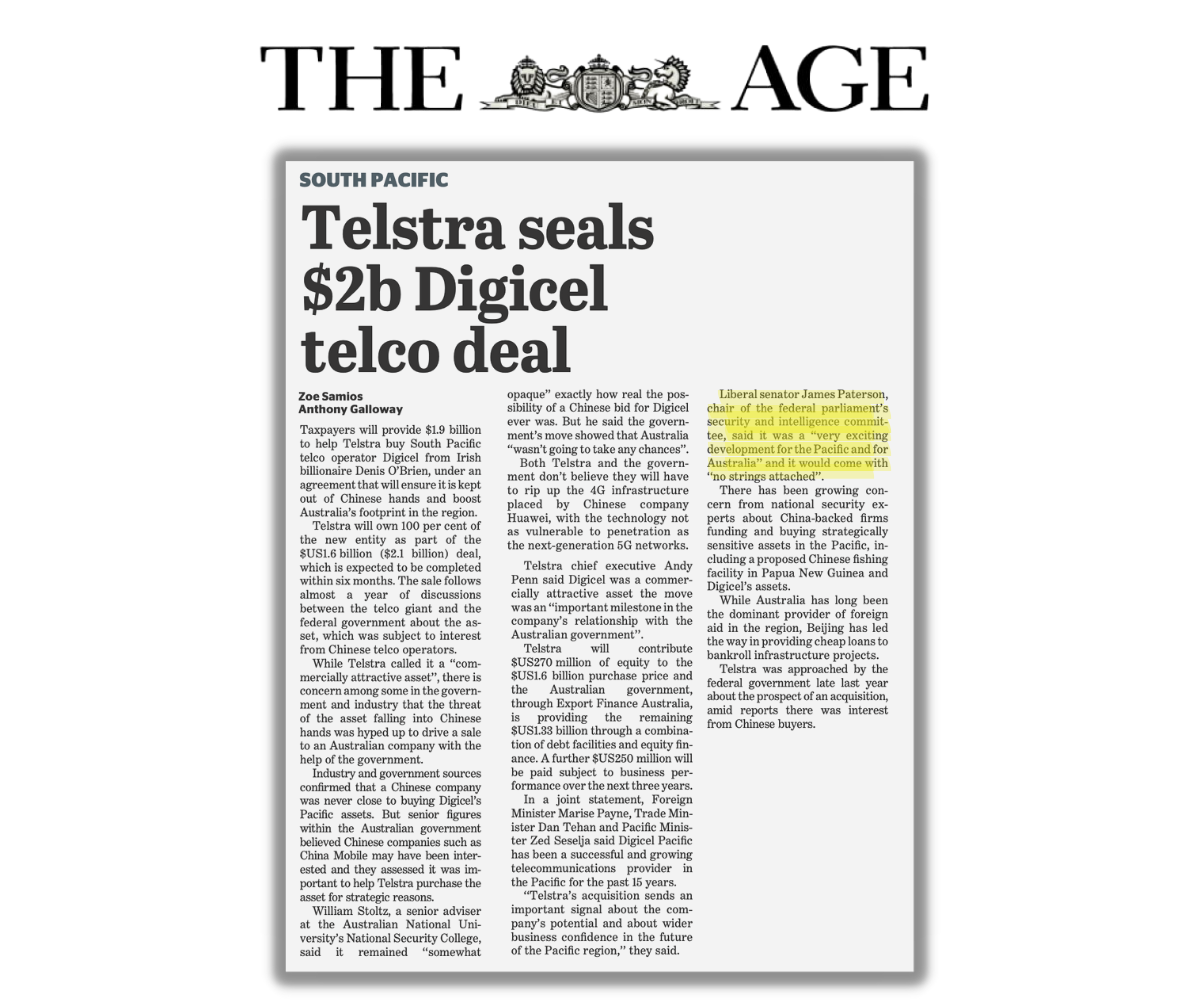 Taxpayers will provide $1.9 billion to help Telstra buy South Pacific telco operator Digicel from Irish billionaire Denis O’Brien, under an agreement that will ensure it is kept out of Chinese hands and boost Australia’s footprint in the region.

Telstra will own 100 per cent of the new entity as part of the $US1.6 billion ($2.1 billion) deal, which is expected to be completed within six months. The sale follows almost a year of discussions between the telco giant and the federal government about the asset, which was subject to interest from Chinese telco operators.

While Telstra called it a “commercially attractive asset”, there is concern among some in the government and industry that the threat of the asset falling into Chinese hands was hyped up to drive a sale to an Australian company with the help of the government.

Industry and government sources confirmed that a Chinese company was never close to buying Digicel’s Pacific assets. But senior figures within the Australian government believed Chinese companies such as China Mobile may have been interested and they assessed it was important to help Telstra purchase the asset for strategic reasons.

William Stoltz, a senior adviser at the Australian National University’s National Security College, said it remained “somewhat opaque” exactly how real the possibility of a Chinese bid for Digicel ever was. But he said the government’s move showed that Australia “wasn’t going to take any chances”.

Dr Stolz said Mr O’Brien was selling Digicel because it had become a “bit of a stranded asset”, but in the tension between economic and security considerations Australia is “going to have to make more decisions like this where security wins out because we’re in an era of ideological contest for the future of our region”.

“The development needs of the Pacific island countries demand wealthier states invest in bolstering their infrastructure and modernising their economies so they can be more prosperous and stable,” he said.

Both Telstra and the government don’t believe they will have to rip up the 4G infrastructure placed by Chinese company Huawei, with the technology not as vulnerable to penetration as the next-generation 5G networks.

Telstra chief executive Andy Penn said Digicel was a commercially attractive asset the move was an “important milestone in the company’s relationship with the Australian government”.

“The Board unanimously believes the transaction is in the best interests of shareholders and it is on this basis that Telstra has agreed to proceed with the acquisition,” he said.

Telstra will contribute $US270 million of equity to the $US1.6 billion purchase price and the Australian Government, through Export Finance Australia, is providing the remaining $US1.33 billion through a combination of debt facilities and equity finance. A further $US250 million will be paid subject to business performance over the next three years.

In a joint statement, Foreign Minister Marise Payne, Trade Minister Dan Tehan and Pacific Minister Zed Seselja said Digicel Pacific has been a successful and growing telecommunications provider in the Pacific for the past 15 years.

“Telstra’s acquisition sends an important signal about the company’s potential and about wider business confidence in the future of the Pacific region,” they said.

“Digicel Pacific has been a successful and growing telecommunications provider in the Pacific for the past 15 years. ”

"EFA is providing financing that enables Telstra to take this commercial opportunity and will bring valuable experience in managing financial and other risks."

Liberal senator James Paterson, chair of the federal parliament’s security and intelligence committee, said it was a “very exciting development for the Pacific and for Australia” and it would come with “no strings attached”.

“Digital communications are the key to development and prosperity, particularly in the developing world,” he said.“It’s a tribute to Australia’s commitment to the Pacific. It’s consistent with our long-standing policy of the Pacific Step Up, and it demonstrates that once again, Australia is a partner of choice whether that comes to aid and development, or more recently, the vaccine roll out and now the development of critical infrastructure.

"One of the key things about this agreement is that it demonstrates that Australia does so for the benefit of our friends and family in the Pacific, and unlike some other operators in the Pacific, we do so without any strings attached.

Asked whether the deal was about countering China, Senator Paterson said “this isn’t about any one other country”.

There has been growing concern from national security experts about China-backed firms funding and buying strategically sensitive assets in the Pacific, including a proposed Chinese fishing facility in Papua New Guinea and Digicel’s assets.

While Australia has long been the dominant provider of foreign aid in the region, Beijing has led the way in providing cheap loans to bankroll infrastructure projects. China was responsible for 37 per cent of all donor loans to the Pacific between 2011 and 2017, funding projects with a total value of about $US1.7 billion.

Telstra was approached by the federal government late last year about the prospect of an acquisition, amid reports there was interest from Chinese buyers. The Sydney Morning Herald and The Age revealed an initial offer was made in July, whereby Telstra would contribute between $200 and $300 million for the assets.

Telstra’s existing international division holds a large subsea cable network that has licences in Asia, Europe and the US. The value in this division comes from the facilitation of data traffic for the company’s major clients including Google, Facebook and Microsoft.

Digicel operates in six markets in the South Pacific including Papua New Guinea, Fiji, Samoa, Vanuatu, Tonga and Nauru. In the year ending March 31, it reported $US450 million in revenue and adjusted earnings [before interest, tax, depreciation and amortisation] of approximately US$ 222 million. Digicel will have no operational responsibility as part of the deal, but the brand will remain in the six markets.

Mr O’Brien will join the board of directors for the newly formed company, which was a request made by Telstra earlier this year.

”I am very pleased that today’s agreement with Telstra, our very near neighbour in the Pacific, will further enhance DPL’s infrastructure, data and call termination links with one of the largest and most reliable networks in Australia,” Mr O’Brien said. “I thank all of our colleagues in the South Pacific and beyond who have made today possible, and I remain committed to ensuring a successful transition in my ongoing role as a director of the newly formed holding company for DPL.”