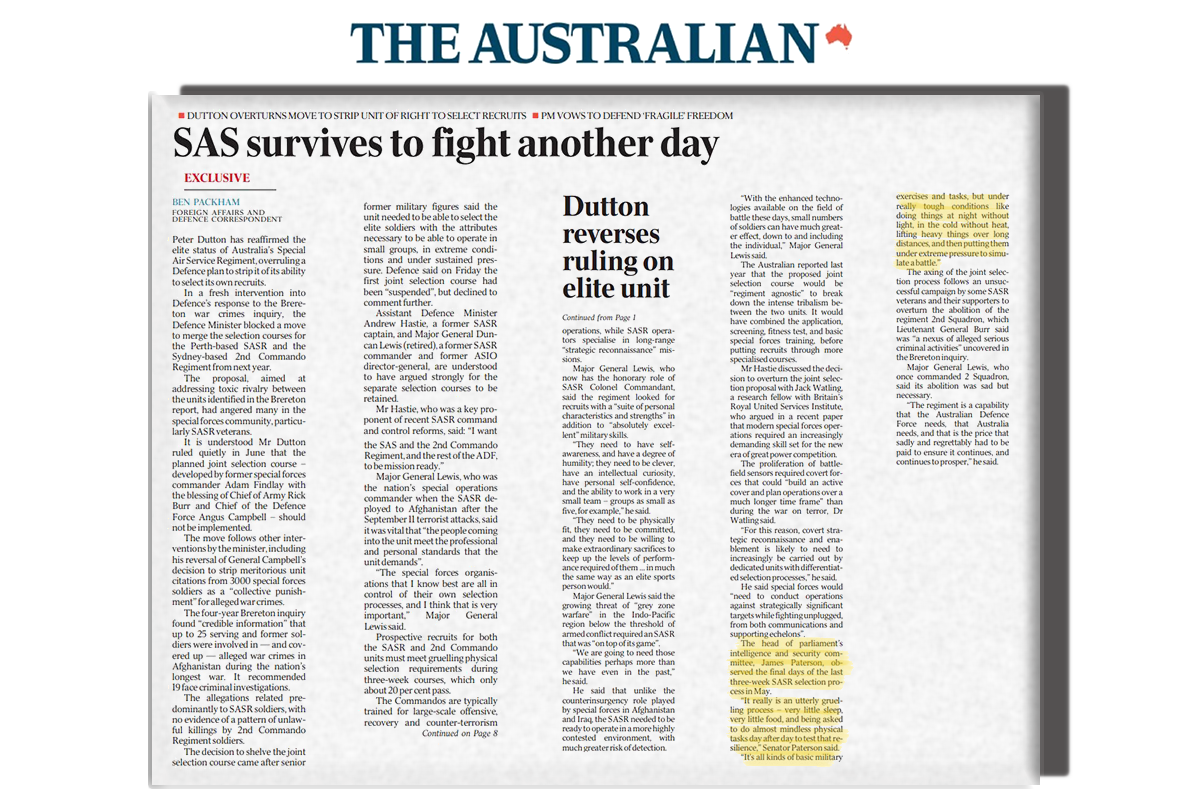 In a fresh intervention into ­Defence’s response to the Brereton war crimes inquiry, the ­Defence Minister blocked a move to merge the selection courses for the Perth-based SASR and the Sydney-based 2nd Commando Regiment from next year.

The proposal, aimed at ­addressing toxic rivalry between the units identified in the Brereton report, had angered many in the special forces community, particularly SASR veterans.

It is understood Mr Dutton ruled quietly in June that the ­planned joint selection course – ­developed by former special forces commander Adam Findlay with the blessing of Chief of Army Rick Burr and Chief of the Defence Force Angus Campbell – should not be implemented.

The move follows other interventions by the minister, including his reversal of General Campbell’s decision to strip meritorious unit citations from 3000 special forces soldiers as a “collective punishment” for alleged war crimes.

The four-year Brereton inquiry found “credible information” that up to 25 serving and former soldiers were involved in — and covered up — alleged war crimes in Afghanistan during the nation’s longest war. It recommended 19 face criminal investigations.

The allegations related predominantly to SASR soldiers, with no evidence of a pattern of unlawful killings by 2nd Commando Regiment soldiers.

The decision to shelve the joint selection course came after senior former military figures said the unit needed to be able to select the elite soldiers with the attributes necessary to be able to operate in small groups, in extreme conditions and under sustained pressure. Defence said on Friday the first joint selection course had been “suspended”, but declined to comment further.

Mr Hastie, who was a key proponent of recent SASR command and control reforms, said: “I want the SAS and the 2nd Commando Regiment, and the rest of the ADF, to be mission ready.”

Major General Lewis, who was the nation’s special operations commander when the SASR deployed to Afghanistan after the September 11 terrorist attacks, said it was vital that “the people coming into the unit meet the professional and personal standards that the unit demands”.

“The special forces organisations that I know best are all in control of their own selection ­processes, and I think that is very important,” Major General Lewis said.

Prospective recruits for both the SASR and 2nd Commando units must meet gruelling physical selection requirements during three-week courses, which only about 20 per cent pass.

Major General Lewis, who now has the honorary role of SASR Colonel Commandant, said the regiment looked for ­recruits with a “suite of personal characteristics and strengths” in addition to “absolutely excellent” military skills.

“They need to have self-awareness, and have a degree of humility; they need to be clever, have an intellectual curiosity, have personal self-confidence, and the ability to work in a very small team – groups as small as five, for example,” he said.

“They need to be physically fit, they need to be committed, and they need to be willing to make extraordinary sacrifices to keep up the levels of performance required of them … in much the same way as an elite sports person would.”

Major General Lewis said the growing threat of “grey zone warfare” in the Indo-Pacific ­region below the threshold of armed conflict required an SASR that was “on top of its game”.

“We are going to need those capabilities perhaps more than we have even in the past,” he said.

He said that unlike the ­counterinsurgency role played by special forces in Afghanistan and Iraq, the SASR needed to be ready to operate in a more highly contested environment, with much greater risk of detection.

“With the enhanced technologies available on the field of battle these days, small numbers of soldiers can have much greater effect, down to and including the individual,” Major General Lewis said.

The Australian reported last year that the proposed joint ­selection course would be ­“regiment agnostic” to break down the intense tribalism between the two units. It would have combined the application, screening, fitness test, and basic special forces training, before putting recruits through more specialised courses.

The proliferation of battlefield sensors required covert forces that could “build an active cover and plan operations over a much longer time frame” than during the war on terror, Dr ­Watling said.

“For this reason, covert strategic reconnaissance and enablement is likely to need to increasingly be carried out by dedicated units with differentiated selection processes,” he said.

He said special forces would “need to conduct operations against strategically significant targets while fighting unplugged, from both communications and supporting echelons”.

The head of parliament’s ­intelligence and security committee, James Paterson, observed the final days of the last three-week SASR selection process in May.

“It really is an utterly gruelling process – very little sleep, very little food, and being asked to do almost mindless physical tasks day after day to test that resilience,” Senator Paterson said.

“It's all kinds of basic military exercises and tasks, but under ­really tough conditions like doing things at night without light, in the cold without heat, lifting heavy things over long distances, and then putting them under extreme pressure to simulate a battle.”

The axing of the joint selection process follows an unsuccessful campaign by some SASR veterans and their supporters to overturn the abolition of the regiment 2nd Squadron, which Lieutenant General Burr said was “a nexus of alleged serious criminal activities” uncovered in the Brereton inquiry.

Major General Lewis, who once commanded 2 Squadron, said its abolition was sad but necessary.

“The regiment is a capability that the Australian Defence Force needs, that Australia needs, and that is the price that sadly and regrettably had to be paid to ensure it continues, and continues to prosper,” he said.