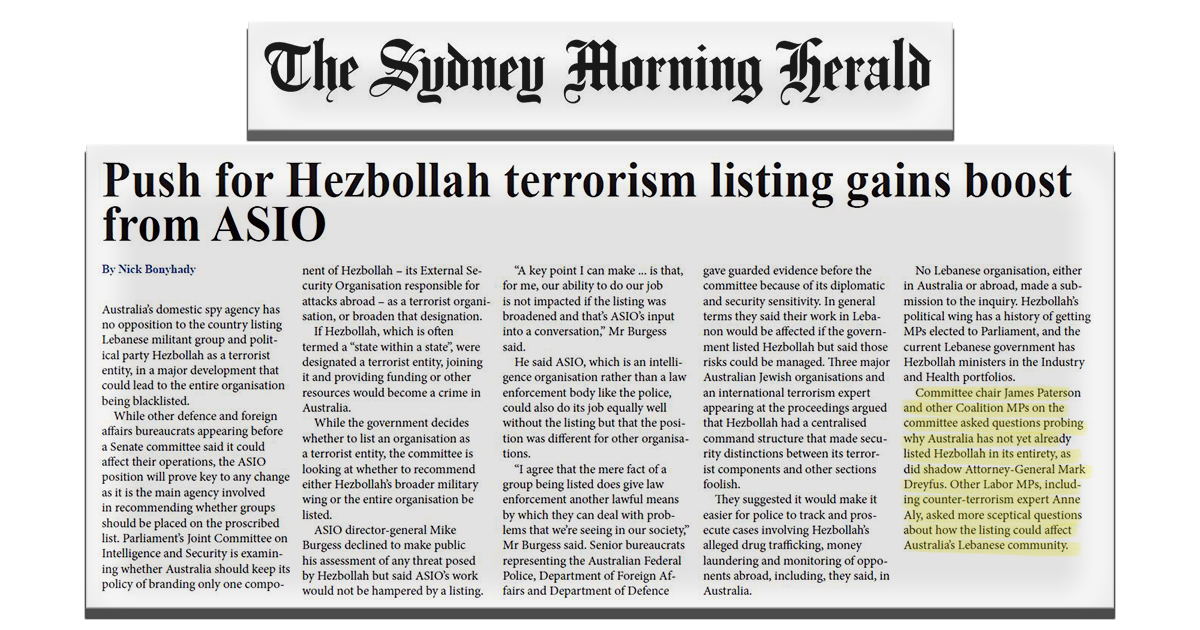 Australia’s domestic spy agency has no opposition to the country listing Lebanese militant group and political party Hezbollah as a terrorist entity, in a major development that could lead to the entire organisation being blacklisted.While other defence and foreign affairs bureaucrats appearing before a Senate committee said it could affect their operations, the ASIO position will prove key to any change as it is the main agency involved in recommending whether groups should be placed on the proscribed list.

Parliament’s Joint Committee on Intelligence and Security is examining whether Australia should keep its policy of branding only one component of Hezbollah – its External Security Organisation responsible for attacks abroad – as a terrorist organisation, or broaden that designation.If Hezbollah, which is often termed a “state within a state”, were designated a terrorist entity, joining it and providing funding or other resources would become a crime in Australia.

While the government decides whether to list an organisation as a terrorist entity, the committee is looking at whether to recommend either Hezbollah’s broader military wing or the entire organisation be listed.

ASIO director-general Mike Burgess declined to make public his assessment of any threat posed by Hezbollah but said ASIO’s work would not be hampered by a listing.“A key point I can make ... is that, for me, our ability to do our job is not impacted if the listing was broadened and that’s ASIO’s input into a conversation,” Mr Burgess said.He said ASIO, which is an intelligence organisation rather than a law enforcement body like the police, could also do its job equally well without the listing but that the position was different for other organisations.“I agree that the mere fact of a group being listed does give law enforcement another lawful means by which they can deal with problems that we’re seeing in our society,” Mr Burgess said.Senior bureaucrats representing the Australian Federal Police, Department of Foreign Affairs and Department of Defence gave guarded evidence before the committee because of its diplomatic and security sensitivity. In general terms they said their work in Lebanon would be affected if the government listed Hezbollah but said those risks could be managed.Three major Australian Jewish organisations and an international terrorism expert appearing at the proceedings argued that Hezbollah had a centralised command structure that made security distinctions between its terrorist components and other sections foolish.They suggested it would make it easier for police to track and prosecute cases involving Hezbollah’s alleged drug trafficking, money laundering and monitoring of opponents abroad, including, they said, in Australia.No Lebanese organisation, either in Australia or abroad, made a submission to the inquiry. Hezbollah’s political wing has a history of getting MPs elected to Parliament, and the current Lebanese government has Hezbollah ministers in the Industry and Health portfolios.

Committee chair James Paterson and other Coalition MPs on the committee asked questions probing why Australia has not yet already listed Hezbollah in its entirety, as did shadow Attorney-General Mark Dreyfus. Other Labor MPs, including counter-terrorism expert Anne Aly, asked more sceptical questions about how the listing could affect Australia’s Lebanese community.