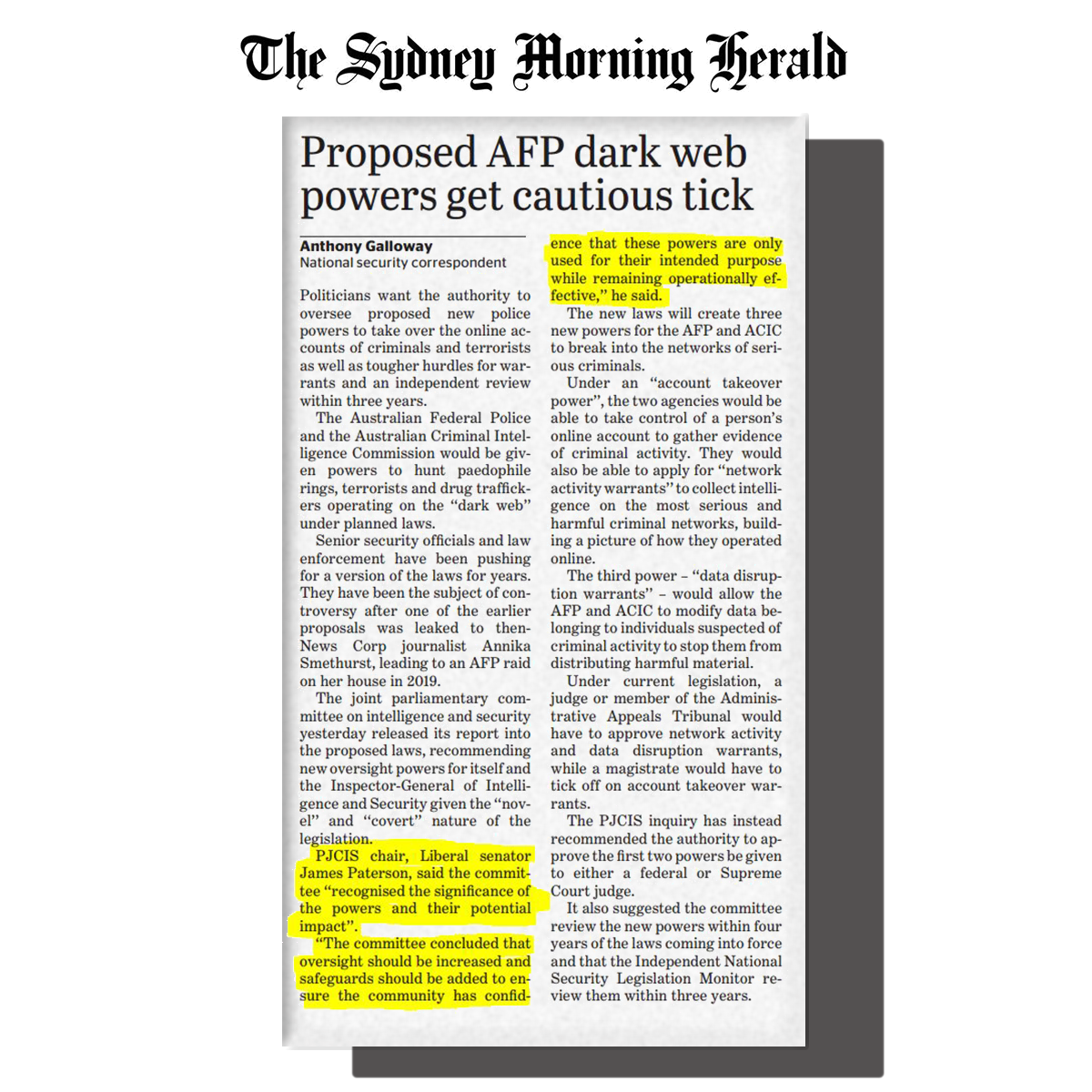 Politicians want the authority to oversee proposed new police powers to take over the online accounts of criminals and terrorists, as well as tougher hurdles for warrants and an independent review within three years.

The Australian Federal Police and the Australian Criminal Intelligence Commission would be given powers to hunt paedophile rings, terrorists and drug traffickers operating on the “dark web” under planned laws.

Senior security officials and law enforcement have been pushing for a version of the laws for years. They have been the subject of controversy after one of the earlier proposals was leaked to then-News Corp journalist Annika Smethurst, leading to an AFP raid on her house in 2019.

PJCIS chair, Liberal senator James Paterson, said the committee “recognised the significance of the powers and their potential impact”.

“The committee concluded that oversight should be increased and safeguards should be added to ensure the community has confidence that these powers are only used for their intended purpose while remaining operationally effective,” he said.

The new laws will create three new powers for the AFP and ACIC to break into the networks of serious criminals.

Under an “account takeover power”, the two agencies would be able to take control of a person’s online account to gather evidence of criminal activity. They would also be able to apply for “network activity warrants” to collect intelligence on the most serious and harmful criminal networks, building a picture of how they operated online.

The third power – “data disruption warrants” – would allow the AFP and ACIC to modify data belonging to individuals suspected of criminal activity to stop them from distributing harmful material. For example, investigators who were aware of child abuse images would be able to modify or delete the material to prevent its further spread.

Under the legislation as currently drafted, a judge or member of the Administrative Appeals Tribunal would have to approve network activity and data disruption warrants, while a magistrate would have to tick off on account takeover warrants.

The PJCIS inquiry has instead recommended the authority to approve the first two powers be given to either a Federal or Supreme Court judge.

It also suggested the PJCIS committee review the new powers within four years of the laws coming into force and that the Independent National Security Legislation Monitor review them within three years. It called for a sunset clause of five years on each of the new powers, meaning they would have to be re-legislated.

The Morrison government argues the new powers are needed because existing computer access warrants are not designed to address new threats on the “dark web” – a part of the internet that allows users to interact anonymously and therefore can more easily evade traditional law enforcement or investigation methods.

Evidence from AFP Commissioner Reece Kershaw to the PJCIS inquiry showed a worrying rise in traffic to the dark web during the COVID-19 pandemic, including 168 per cent more child abuse material identified in the first quarter of 2020 compared to the same period the previous year.