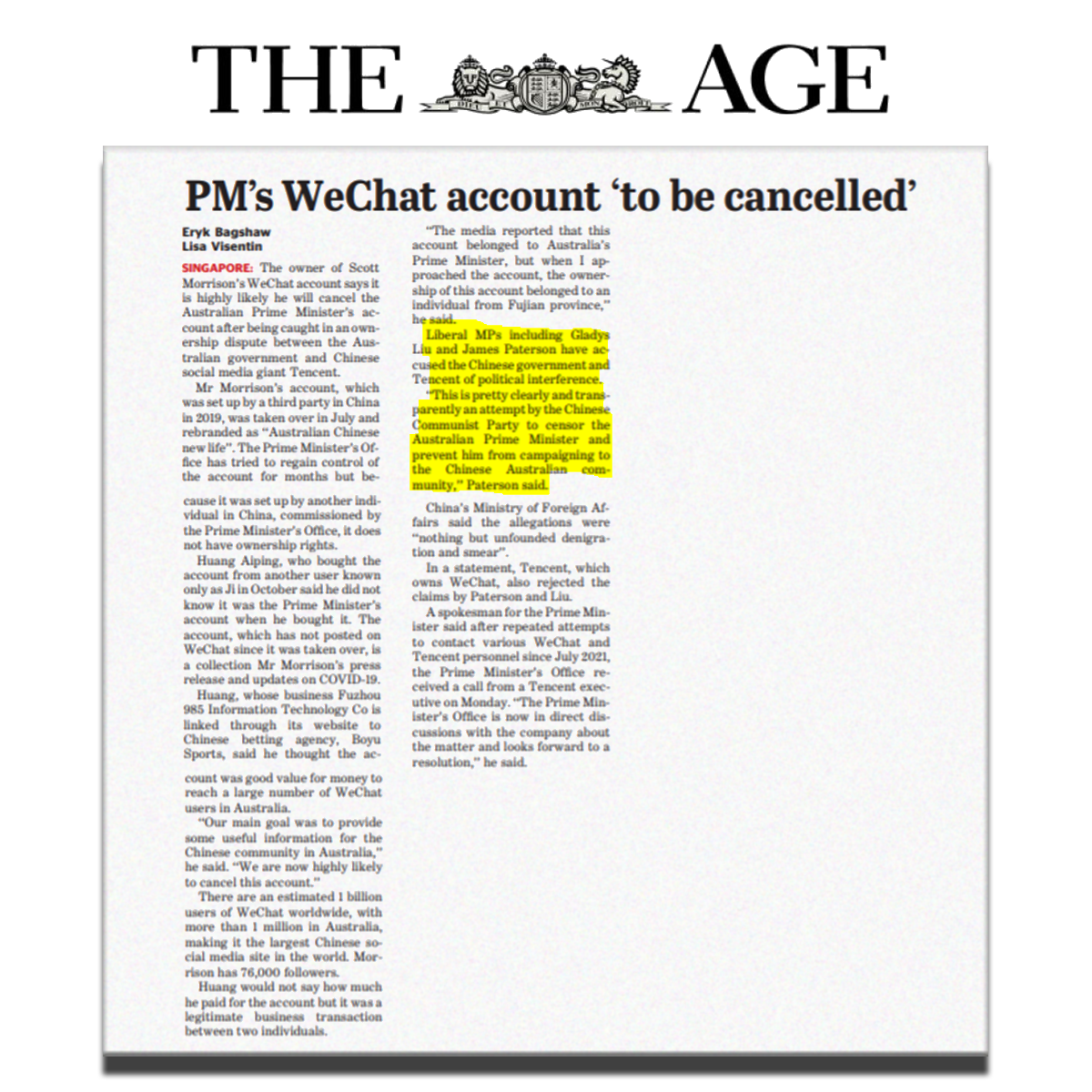 Singapore: The owner of Scott Morrison’s WeChat says it is highly likely he will cancel the Australian Prime Minister’s account after being caught in an ownership dispute between the Australian government and Chinese social media giant Tencent.

Huang Aiping, who bought the account from another user known only as Ji in October last year said he did not know it was the Prime Minister’s account when he purchased it. The account, which has not posted on WeChat since it was taken over, is a collection of press releases by Morrison and updates on COVID-19.

Huang, whose business Fuzhou 985 Information Technology Co is linked through its website to Chinese betting agency, Boyu Sports, said he thought the account was good value for money to reach a large number of WeChat users in Australia.

“Our main goal was to provide some useful information for the Chinese community in Australia,” he said. “We are now highly likely to cancel this account or switch it to overseas Chinese in other regions, such as the United States, and try to avoid Australia as much as possible in the future, due to the current circumstances because the account used to belong to the Australian Prime Minister.”

There are an estimated 1 billion users of WeChat worldwide, with more than 1 million in Australia, making it the largest Chinese social media site in the world. Morrison has 76,000 followers.

Huang would not say how much he purchased the Prime Minister’s account for but said it was a legitimate business transaction between two individuals.

“So, I only recognise this individual and I do not admit that this account belonged to the Australian Prime Minister.”

Liberal MPs including Gladys Liu and James Paterson accused the Chinese government and Tencent of political interference over the affair on Monday.

“This is pretty clearly and transparently an attempt by the Chinese Communist Party to censor the Australian Prime Minister and prevent him from campaigning to the Chinese Australian community,” Paterson said.

China’s Ministry of Foreign Affairs on Monday said the allegations were “nothing but unfounded denigration and smear”.

“We never engage in and have no interest in foreign interference,” said spokesman Zhao Lijian.

In 2018, Australia introduced foreign interference laws after a series of Chinese Communist Party operatives, including billionaire Huang Xiangmo, attempted to influence Coalition and Labor Party positions on issues such as the South China Sea through political donations.

In a statement, Tencent, which owns WeChat, also rejected the claims by Paterson and Liu and said based on its information, the situation appeared to be a dispute over account ownership.

“The account in question was originally registered by a [People’s Republic of China] individual and was subsequently transferred to its current operator, a technology services company — and it will be handled in accordance with our platform rules,” a spokesman said.

“Tencent is committed to upholding the integrity of our platform and the security of all users accounts, and we will continue to look into this matter.”

Huang said he was waiting on advice from Tencent. “I’m afraid to publicise anything since this incident because I’m still waiting for the next step,” he said. “I’m trying to figure out if Tencent will ever move this account to Australian Prime Minister, but I doubt it.”

The Prime Minister’s Office has been frustrated by what it sees as a lack of communication from Tencent over the matter after it sent an appeals letter to Tencent chairman and chief executive Ma Huateng on January 10. The Prime Minister’s Office has declined to identify the agency and individual it originally commissioned to set up the account in China.

A spokesman for the Prime Minister said after repeated attempts to contact various WeChat and Tencent personnel since July 2021, including the CEO, the Prime Minister’s Office received a call from a Tencent executive on Monday night.

“The Prime Minister’s Office is now in direct discussions with the company about the matter and looks forward to a resolution,” the spokesman said.