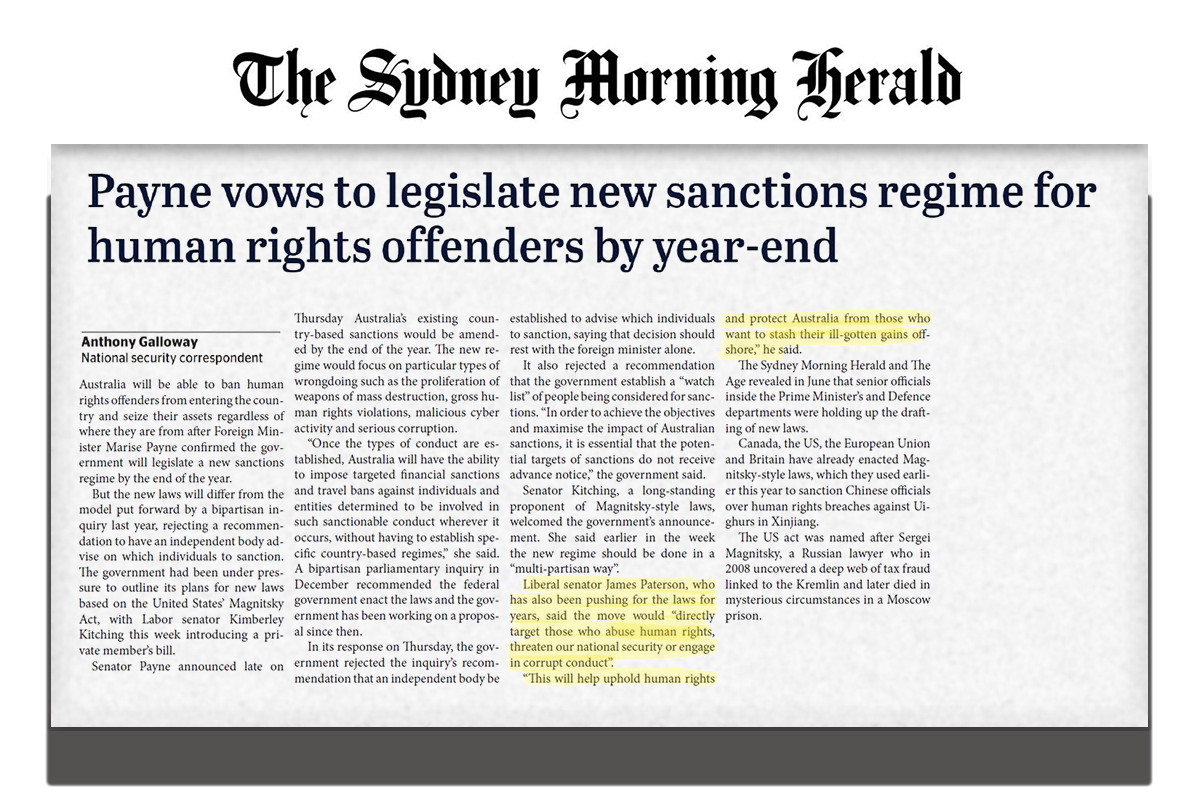 Australia will be able to ban human rights offenders from entering the country and seize their assets regardless of where they are from after Foreign Minister Marise Payne confirmed the government will legislate a new sanctions regime by the end of the year.

But the new laws will differ from the model put forward by a bipartisan inquiry last year, rejecting a recommendation to have an independent body advise on which individuals to sanction.

The government had been under pressure to outline its plans for new laws based on the United States’ Magnitsky Act, with Labor senator Kimberley Kitching this week introducing a private member’s bill .

Senator Payne announced late on Thursday Australia’s existing country-based sanctions would be amended by the end of the year. The new regime would focus on particular types of wrongdoing such as the proliferation of weapons of mass destruction, gross human rights violations, malicious cyber activity and serious corruption.

“Once the types of conduct are established, Australia will have the ability to impose targeted financial sanctions and travel bans against individuals and entities determined to be involved in such sanctionable conduct wherever it occurs, without having to establish specific country-based regimes,” she said.

A bipartisan parliamentary inquiry in December recommended the federal government enact the laws and the government has been working on a proposal since then.

In its response on Thursday, the government rejected the inquiry’s recommendation that an independent body be established to advise which individuals to sanction, saying that decision should rest with the foreign minister alone.

It also rejected a recommendation that the government establish a “watch list” of people being considered for sanctions.

“In order to achieve the objectives and maximise the impact of Australian sanctions, it is essential that the potential targets of sanctions do not receive advance notice,” the government said.

Senator Kitching, a long-standing proponent of Magnitsky-style laws, welcomed the government’s announcement. She said earlier in the week the new regime should be done in a “multi-partisan way”.

Liberal senator James Paterson, who has also been pushing for the laws for years, said the move would “directly target those who abuse human rights, threaten our national security or engage in corrupt conduct”.

“This will help uphold human rights and protect Australia from those who want to stash their ill-gotten gains offshore,” he said.

The Sydney Morning Herald and The Age revealed in June that senior officials inside the Prime Minister’s and Defence departments were holding up the drafting of new laws.

Canada, the US, the European Union and Britain have already enacted Magnitsky-style laws, which they used earlier this year to sanction Chinese officials over human rights breaches against Uighurs in Xinjiang.

The US act was named after Sergei Magnitsky, a Russian lawyer who in 2008 uncovered a deep web of tax fraud linked to the Kremlin and later died in mysterious circumstances in a Moscow prison.