MPs in drive for nuclear energy 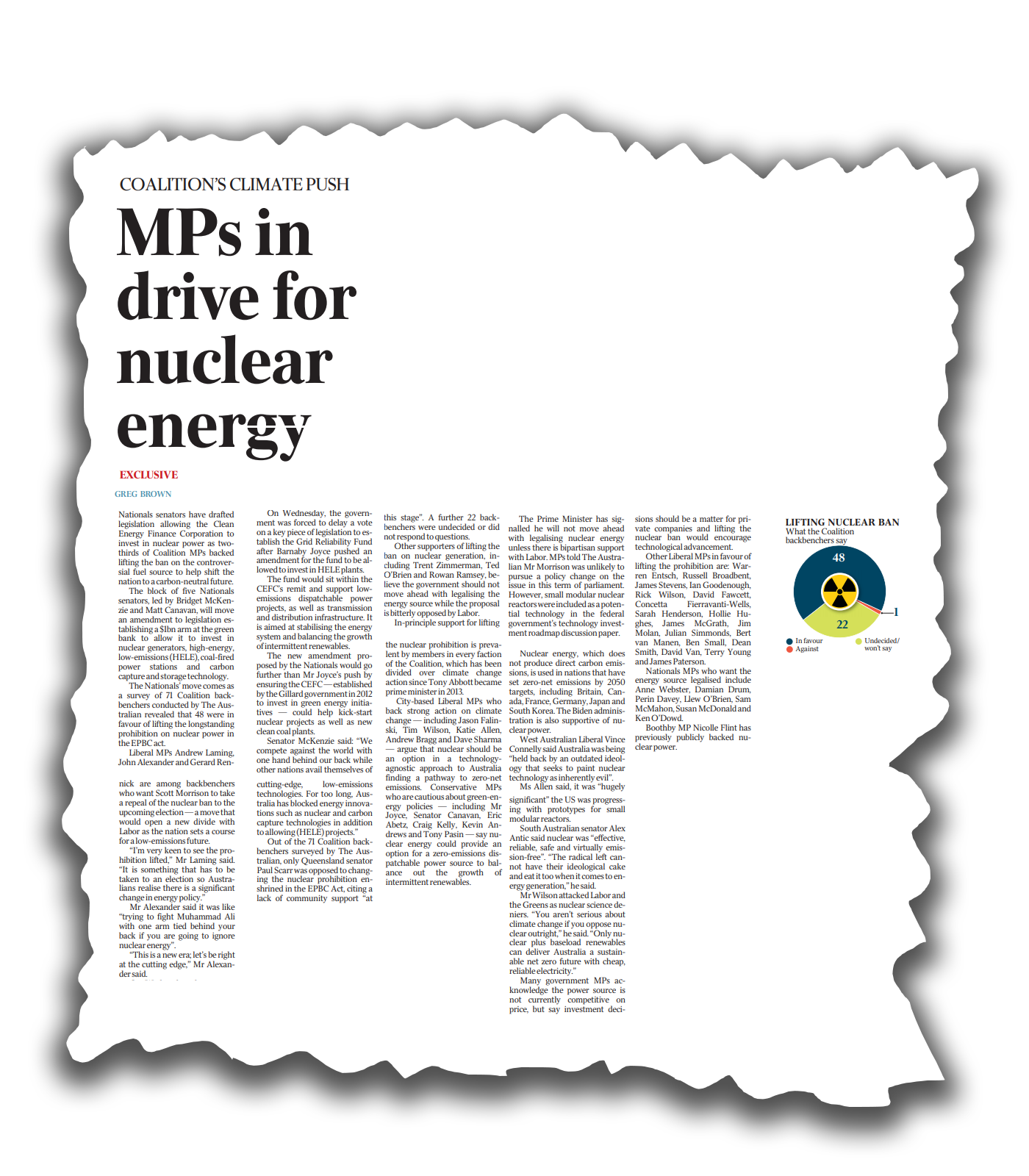 Nationals senators have drafted legislation allowing the Clean ­Energy Finance Corporation to invest in nuclear power as two-thirds of Coalition MPs backed lifting the ban on the controversial fuel source to help shift the nation to a carbon-neutral future.

The block of five Nationals senators, led by Bridget McKenzie and Matt Canavan, will move an amendment to legislation establishing a $1bn arm at the green bank to allow it to invest in ­nuclear generators, high-energy, low-emissions (HELE), coal-fired power stations and carbon ­capture and storage technology.

The Nationals’ move comes as a survey of 71 Coalition backbenchers conducted by The Australian revealed that 48 were in favour of lifting the longstanding prohibition on nuclear power in the EPBC act.

Liberal MPs Andrew Laming, John Alexander and Gerard Rennick are among backbenchers who want Scott Morrison to take a repeal of the nuclear ban to the upcoming election — a move that would open a new divide with Labor as the nation sets a course for a low-emissions future.

“I’m very keen to see the prohibition lifted,” Mr Laming said. “It is something that has to be taken to an election so Australians realise there is a significant change in energy policy.”

Mr Alexander said it was like “trying to fight Muhammad Ali with one arm tied behind your back if you are going to ignore ­nuclear energy”.

“This is a new era; let’s be right at the cutting edge,” Mr Alexander said.

On Wednesday, the government was forced to delay a vote on a key piece of legislation to establish the Grid Reliability Fund after Barnaby Joyce pushed an amendment for the fund to be allowed to invest in HELE plants.

The fund would sit within the CEFC’s remit and support low-emissions dispatchable power projects, as well as transmission and distribution ­infrastructure. It is aimed at stabilising the energy system and balancing the growth of intermittent renewables.

The new amendment proposed by the Nationals would go further than Mr Joyce’s push by ensuring the CEFC — established by the Gillard government in 2012 to invest in green energy initiatives — could help kick-start ­nuclear projects as well as new clean coal plants.

Senator McKenzie said: “We compete against the world with one hand behind our back while other nations avail themselves of cutting-edge, low-emissions technologies. For too long, Australia has blocked energy innovations such as nuclear and carbon capture technologies in addition to allowing (HELE) projects.”

Out of the 71 Coalition backbenchers surveyed by The Australian, only Queensland senator Paul Scarr was opposed to changing the nuclear prohibition enshrined in the EPBC Act, citing a lack of community support “at this stage”. A further 22 backbenchers were undecided or did not respond to questions.

Other supporters of lifting the ban on nuclear generation, including Trent Zimmerman, Ted O’Brien and Rowan Ramsey, believe the government should not move ahead with legalising the energy source while the proposal is bitterly opposed by Labor.

In-principle support for lifting the nuclear prohibition is prevalent by members in every faction of the Coalition, which has been divided over climate change ­action since Tony Abbott became prime minister in 2013.

City-based Liberal MPs who back strong action on climate change — including Jason Falinski, Tim Wilson, Katie Allen, ­Andrew Bragg and Dave Sharma — argue that nuclear should be an option in a technology-­agnostic approach to Australia finding a pathway to zero-net emissions. Conservative MPs who are cautious about green-energy policies — including Mr Joyce, Senator Canavan, Eric Abetz, Craig Kelly, Kevin Andrews and Tony Pasin — say nuclear energy could provide an option for a zero-emissions dispatchable power source to balance out the growth of intermittent renewables.

The Prime Minister has signalled he will not move ahead with legalising nuclear energy unless there is bipartisan support with Labor. MPs told The Australian Mr Morrison was unlikely to pursue a policy change on the issue in this term of parliament. However, small modular nuclear reactors were included as a potential technology in the federal ­government’s technology investment roadmap discussion paper.

Nuclear energy, which does not produce direct carbon emissions, is used in nations that have set zero-net emissions by 2050 targets, including Britain, Canada, France, Germany, Japan and South Korea. The Biden administration is also supportive of nuclear power.

West Australian Liberal Vince Connelly said Australia was being “held back by an outdated ideology that seeks to paint nuclear technology as inherently evil”.

Ms Allen said, it was “hugely significant” the US was progressing with prototypes for small modular reactors.

South Australian senator Alex Antic said nuclear was “effective, reliable, safe and virtually emission-free”. “The radical left cannot have their ideological cake and eat it too when it comes to energy generation,” he said.

Mr Wilson attacked Labor and the Greens as nuclear science deniers. “You aren’t serious about climate change if you oppose nuclear outright,” he said. “Only nuclear plus baseload renewables can deliver Australia a sustainable net zero future with cheap, reliable electricity.”

Many government MPs acknowledge the power source is not currently competitive on price, but say investment decisions should be a matter for private companies and lifting the nuclear ban would encourage technological advancement.