Islamic summit to include Taliban 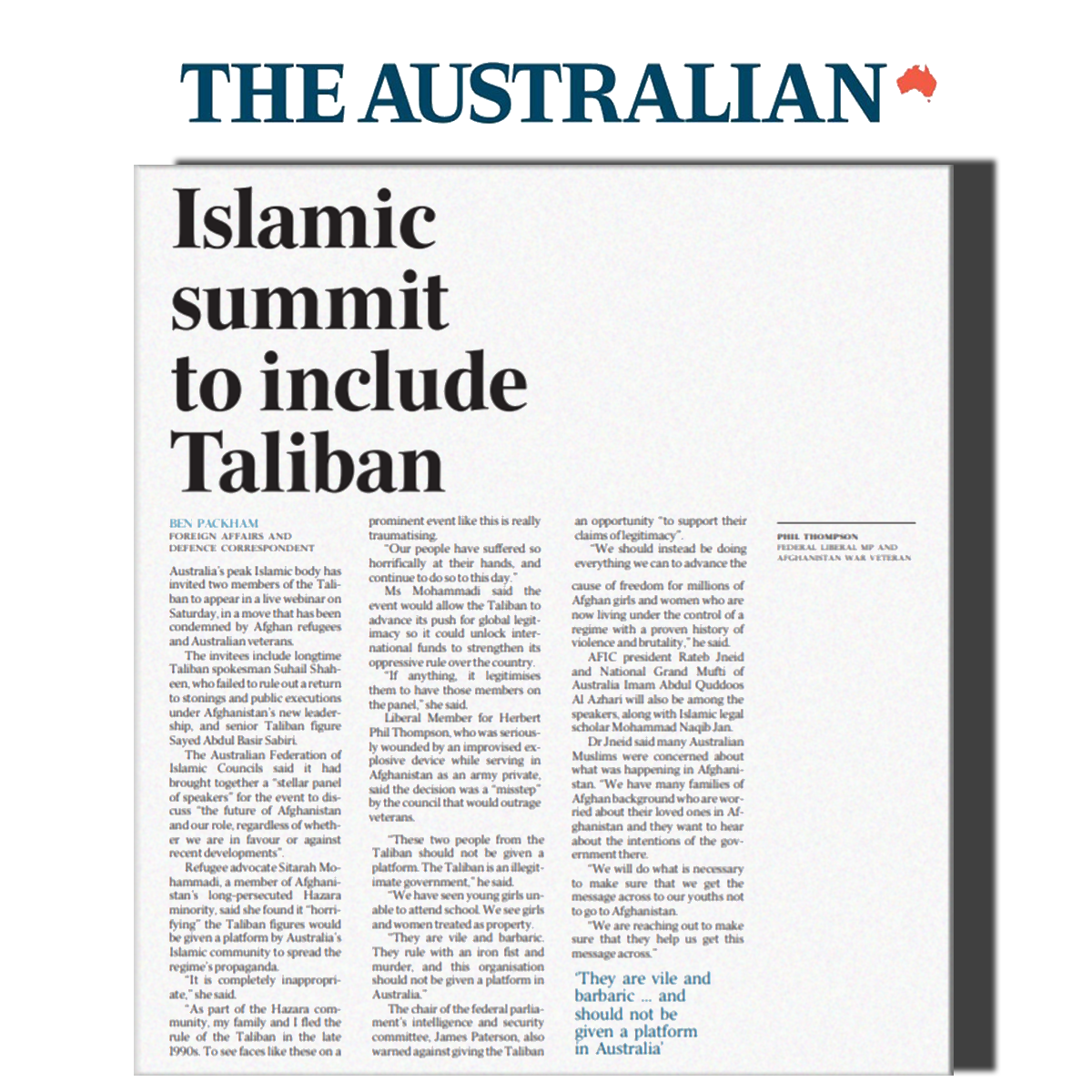 Australia’s peak Islamic body has invited two members of the Taliban to appear in a live webinar on Saturday, in a move that has been condemned by Afghan refugees and Australian veterans.

The invitees include longtime Taliban spokesman Suhail Shaheen, who failed to rule out a return to stonings and public executions under Afghanistan’s new leadership, and senior Taliban figure Sayed Abdul Basir Sabiri.

The Australian Federation of Islamic Councils said it had brought together a “stellar panel of speakers” for the event to discuss “the future of Afghanistan and our role, regardless of whether we are in favour or against ­recent ­developments”.

Refugee advocate Sitarah Mohammadi, a member of Afghanistan’s long-persecuted Hazara minority, said she found it “horrifying” the Taliban figures would be given a platform by Australia’s Islamic community to spread the regime’s propaganda.

“It is completely inappropriate,” she said.

“As part of the Hazara community, my family and I fled the rule of the Taliban in the late 1990s. To see faces like these on a prominent event like this is really traumatising.

“Our people have suffered so horrifically at their hands, and continue to do so to this day.”

Ms Mohammadi said the event would allow the Taliban to advance its push for global legitimacy so it could unlock inter­national funds to strengthen its oppressive rule over the country.

“If anything, it legitimises them to have those members on the panel,” she said.

Liberal Member for Herbert Phil Thompson, who was seriously wounded by an improvised explosive device while serving in Afghanistan as an army private, said the decision was a “misstep” by the council that would outrage veterans.

“These two people from the Taliban should not be given a platform. The Taliban is an illegitimate government,” he said.

“We have seen young girls unable to attend school. We see girls and women treated as property.

“They are vile and barbaric. They rule with an iron fist and murder, and this organisation should not be given a platform in Australia.”

The chair of the federal parliament’s intelligence and security committee, James Paterson, also warned against giving the Taliban an opportunity “to sup­port their claims of legitimacy”.

“We should instead be doing everything we can to advance the cause of freedom for millions of Afghan girls and women who are now living under the control of a regime with a proven history of violence and brutality,” he said.

Dr Jneid said many Australian Muslims were concerned about what was happening in Afghanistan. “We have many families of Afghan background who are worried about their loved ones in Afghanistan and they want to hear about the intentions of the government there.

“We will do what is necessary to make sure that we get the message across to our youths not to go to Afghanistan.

“We are reaching out to make sure that they help us get this message across.”