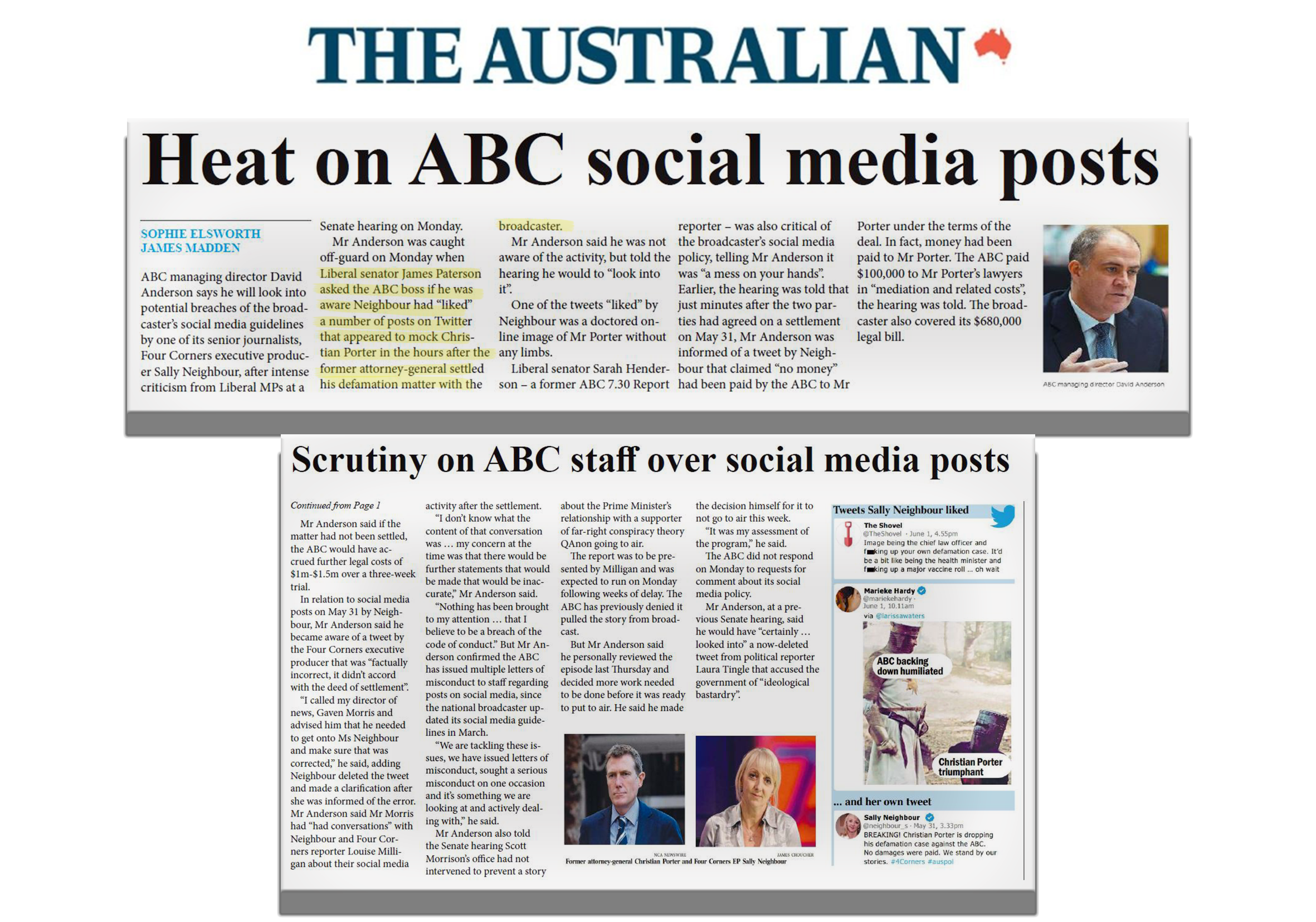 ABC managing director David Anderson says he will look into potential breaches of the broadcaster’s social media guidelines by one of its senior journalists, Four Corners executive producer Sally Neighbour, after intense criticism from Liberal MPs at a Senate hearing on Monday.

Mr Anderson was caught off-guard on Monday when Liberal senator James Paterson asked the ABC boss if he was aware Neighbour had “liked” a number of posts on Twitter that appeared to mock Christian Porter in the hours after the former attorney-general settled his defamation matter with the broadcaster.

Mr Anderson said he was not aware of the activity, but told the hearing he would to “look into it”.

One of the tweets “liked” by Neighbour was a doctored online image of Mr Porter without any limbs.

Liberal senator Sarah Henderson – a former ABC 7.30 Report reporter – was also critical of the broadcaster’s social media policy, telling Mr Anderson it was “a mess on your hands”.

Earlier, the hearing was told that just minutes after the two parties had agreed on a settlement on May 31, Mr Anderson was informed of a tweet by Neighbour that claimed “no money” had been paid by the ABC to Mr Porter under the terms of the deal. In fact, money had been paid to Mr Porter.

The ABC paid $100,000 to Mr Porter’s lawyers in “mediation and related costs”, the hearing was told. The broadcaster also covered its $680,000 legal bill.

Mr Anderson said if the matter had not been settled, the ABC would have accrued further legal costs of $1m-$1.5m over a three-week trial.

In relation to social media posts on May 31 by Neighbour, Mr Anderson said he became aware of a tweet by the Four Corners executive producer that was “factually incorrect, it didn’t accord with the deed of settlement”.

“I called my director of news, Gaven Morris and advised him that he needed to get onto Ms Neighbour and make sure that was corrected,” he said, adding Neighbour deleted the tweet and made a clarification after she was informed of the error.

Mr Anderson said Mr Morris had “had conversations” with Neighbour and Four Corners reporter Louise Milligan about their social media activity after the settlement.

“I don’t know what the content of that conversation was … my concern at the time was that there would be further statements that would be made that would be inaccurate,” Mr Anderson said.

“Nothing has been brought to my attention … that I believe to be a breach of the code of conduct.”

But Mr Anderson confirmed the ABC has issued multiple letters of misconduct to staff regarding posts on social media, since the national broadcaster updated its social media guidelines in March.

“We are tackling these issues, we have issued letters of misconduct, sought a serious misconduct on one occasion and it’s something we are looking at and actively dealing with,” he said.

Mr Anderson also told the Senate hearing Scott Morrison’s office had not intervened to prevent a story about the Prime Minister’s relationship with a supporter of far-right conspiracy theory QAnon going to air.

The report was to be presented by Milligan and was expected to run on Monday following weeks of delay. The ABC has previously denied it pulled the story from broadcast.

But Mr Anderson said he personally reviewed the episode last Thursday and decided more work needed to be done before it was ready to put to air. He said he made the decision himself for it to not go to air this week.

“It was my assessment of the program,” he said.

Mr Anderson, at a previous Senate hearing, said he would have “certainly … looked into” a now-deleted tweet from political reporter Laura Tingle that accused the government of “ideological bastardry”.