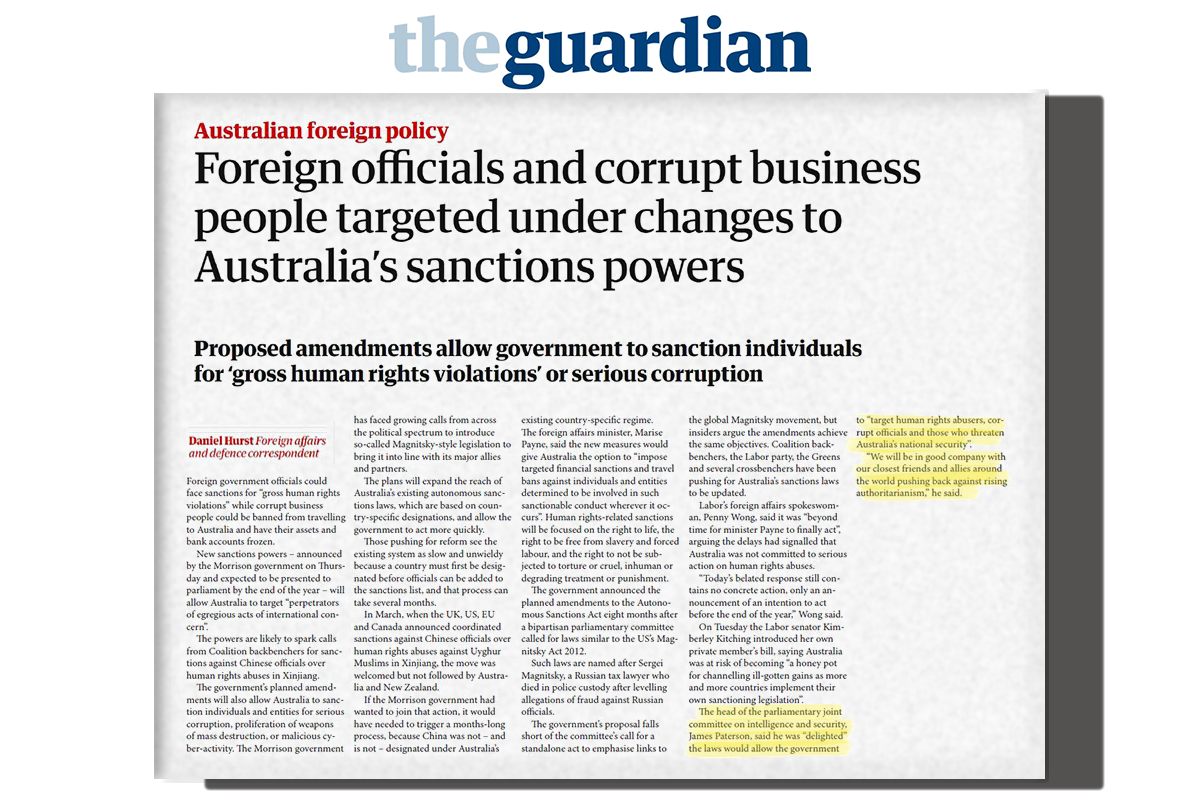 Foreign government officials could face sanctions for “gross human rights violations” while corrupt business people could be banned from travelling to Australia and have their assets and bank accounts frozen.

New sanctions powers – announced by the Morrison government on Thursday and expected to be presented to parliament by the end of the year – will allow Australia to target “perpetrators of egregious acts of international concern”.

The powers are likely to spark calls from Coalition backbenchers for sanctions against Chinese officials over human rights abuses in Xinjiang.

The government’s planned amendments will also allow Australia to sanction individuals and entities for serious corruption, proliferation of weapons of mass destruction, or malicious cyber-activity.

The Morrison government has faced growing calls from across the political spectrum to introduce so-called Magnitsky-style legislation to bring it into line with its major allies and partners.

The plans will expand the reach of Australia’s existing autonomous sanctions laws, which are based on country-specific designations, and allow the government to act more quickly.

Those pushing for reform see the existing system as slow and unwieldy because a country must first be designated before officials can be added to the sanctions list, and that process can take several months.

In March, when the UK, US, EU and Canada announced coordinated sanctions against Chinese officials over human rights abuses against Uyghur Muslims in Xinjiang, the move was welcomed but not followed by Australia and New Zealand.

If the Morrison government had wanted to join that action, it would have needed to trigger a months-long process, because China was not – and is not – designated under Australia’s existing country-specific regime.

The foreign affairs minister, Marise Payne, said the new measures would give Australia the option to “impose targeted financial sanctions and travel bans against individuals and entities determined to be involved in such sanctionable conduct wherever it occurs”.

Human rights-related sanctions will be focused on the right to life, the right to be free from slavery and forced labour, and the right to not be subjected to torture or cruel, inhuman or degrading treatment or punishment.

The government announced the planned amendments to the Autonomous Sanctions Act eight months after a bipartisan parliamentary committee called for laws similar to the US’s Magnitsky Act 2012.

Such laws are named after Sergei Magnitsky, a Russian tax lawyer who died in police custody after levelling allegations of fraud against Russian officials.

The government’s proposal falls short of the committee’s call for a standalone act to emphasise links to the global Magnitsky movement, but insiders argue the amendments achieve the same objectives.

Coalition backbenchers, the Labor party, the Greens and several crossbenchers have been pushing for Australia’s sanctions laws to be updated.

Labor’s foreign affairs spokeswoman, Penny Wong, said it was “beyond time for minister Payne to finally act”, arguing the delays had signalled that Australia was not committed to serious action on human rights abuses.

“Today’s belated response still contains no concrete action, only an announcement of an intention to act before the end of the year,” Wong said.

On Tuesday the Labor senator Kimberley Kitching introduced her own private member’s bill, saying Australia was at risk of becoming “a honey pot for channelling ill-gotten gains as more and more countries implement their own sanctioning legislation”.

The head of the parliamentary joint committee on intelligence and security, James Paterson, said he was “delighted” the laws would allow the government to “target human rights abusers, corrupt officials and those who threaten Australia’s national security”.

“We will be in good company with our closest friends and allies around the world pushing back against rising authoritarianism,” he said.