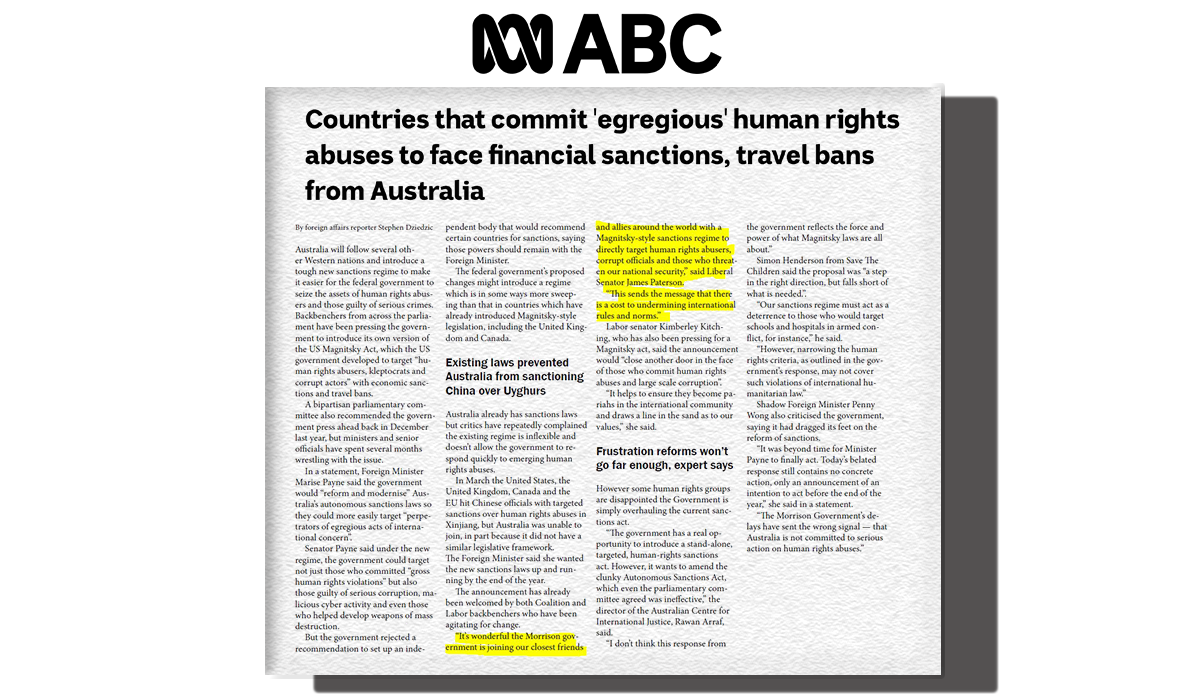 Australia will follow several other Western nations and introduce a tough new sanctions regime to make it easier for the federal government to seize the assets of human rights abusers and those guilty of serious crimes.

Backbenchers from across the parliament have been pressing the government to introduce its own version of the US Magnitsky Act, which the US government developed to target "human rights abusers, kleptocrats and corrupt actors" with economic sanctions and travel bans.

A bipartisan parliamentary committee also recommended the government press ahead back in December last year, but ministers and senior officials have spent several months wrestling with the issue.

In a statement, Foreign Minister Marise Payne said the government would "reform and modernise" Australia's autonomous sanctions laws so they could more easily target "perpetrators of egregious acts of international concern".

Senator Payne said under the new regime, the government could target not just those who committed “gross human rights violations” but also those guilty of serious corruption, malicious cyber activity and even those who helped develop weapons of mass destruction.

But the government rejected a recommendation to set up an independent body that would recommend certain countries for sanctions, saying those powers should remain with the Foreign Minister.

The federal government’s proposed changes might introduce a regime which is in some ways more sweeping than that in countries which have already introduced Magnitsky-style legislation, including the United Kingdom and Canada.

Australia already has sanctions laws but critics have repeatedly complained the existing regime is inflexible and doesn't allow the government to respond quickly to emerging human rights abuses.

In March the United States, the United Kingdom, Canada and the EU hit Chinese officials with targeted sanctions over human rights abuses in Xinjiang, but Australia was unable to join, in part because it did not have a similar legislative framework.

The Foreign Minister said she wanted the new sanctions laws up and running by the end of the year.

The announcement has already been welcomed by both Coalition and Labor backbenchers who have been agitating for change.

"It's wonderful the Morrison government is joining our closest friends and allies around the world with a Magnitsky-style sanctions regime to directly target human rights abusers, corrupt officials and those who threaten our national security," said Liberal Senator James Paterson.

"This sends the message that there is a cost to undermining international rules and norms."

Labor senator Kimberley Kitching, who has also been pressing for a Magnitsky act, said the announcement would "close another door in the face of those who commit human rights abuses and large scale corruption".

"It helps to ensure they become pariahs in the international community and draws a line in the sand as to our values," she said.

However some human rights groups are disappointed the Government is simply overhauling the current sanctions act.

"The government has a real opportunity to introduce a stand-alone, targeted, human-rights sanctions act. However, it wants to amend the clunky Autonomous Sanctions Act, which even the parliamentary committee agreed was ineffective," the director of the Australian Centre for International Justice, Rawan Arraf, said.

"I don't think this response from the government reflects the force and power of what Magnitsky laws are all about."

Simon Henderson from Save The Children said the proposal was "a step in the right direction, but falls short of what is needed.".

"Our sanctions regime must act as a deterrence to those who would target schools and hospitals in armed conflict, for instance," he said.

"However, narrowing the human rights criteria, as outlined in the government's response, may not cover such violations of international humanitarian law."

Shadow Foreign Minister Penny Wong also criticised the government, saying it had dragged its feet on the reform of sanctions.

"It was beyond time for Minister Payne to finally act. Today's belated response still contains no concrete action, only an announcement of an intention to act before the end of the year," she said in a statement.

"The Morrison Government's delays have sent the wrong signal — that Australia is not committed to serious action on human rights abuses."