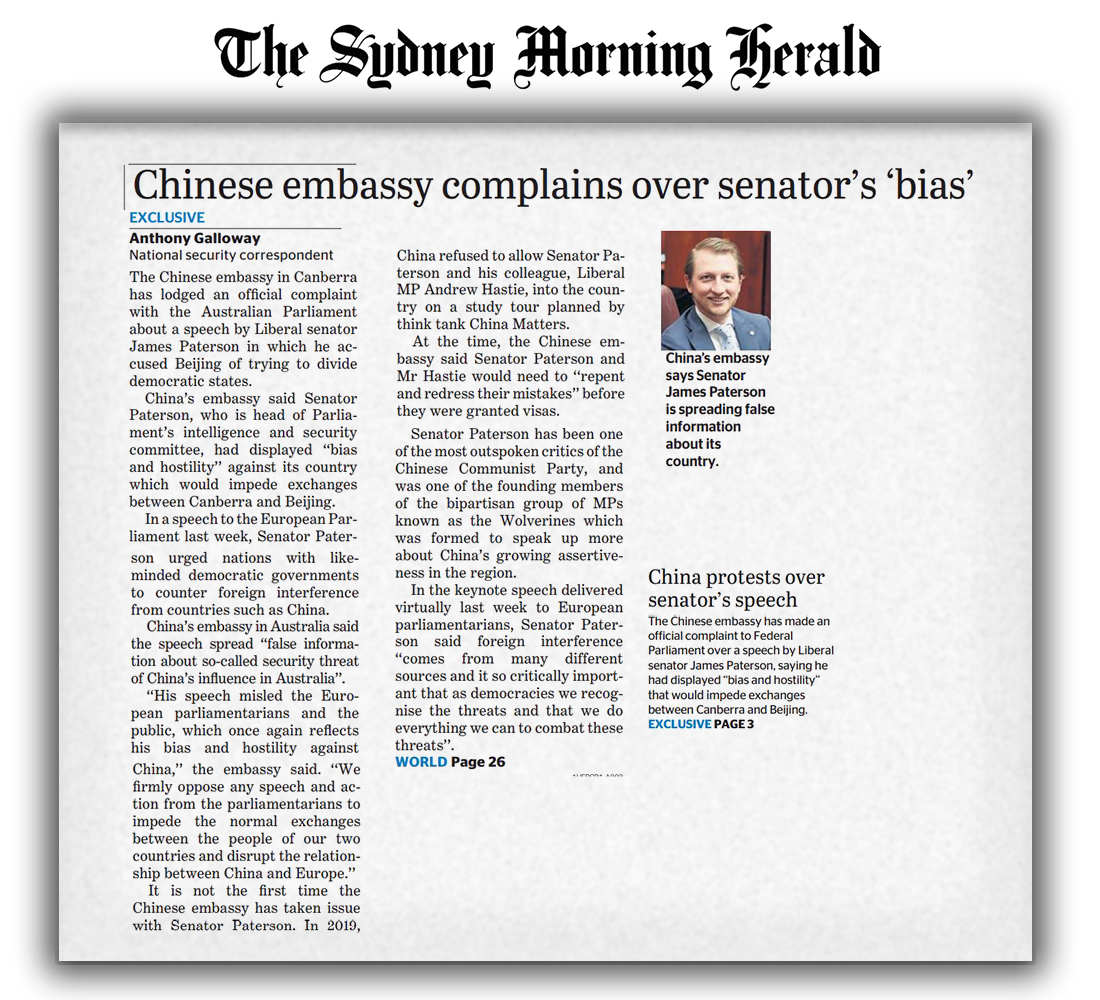 The Chinese embassy in Canberra has lodged an official complaint with the Australian Parliament about a speech by Liberal senator James Paterson in which he accused Beijing of trying to divide democratic states.

China’s embassy said Senator Paterson, who is head of Parliament’s intelligence and security committee, had displayed “bias and hostility” against its country which would impede exchanges between Canberra and Beijing.

In a speech to the European Parliament last week, Senator Paterson urged nations to work together with like-minded democratic governments to counter foreign interference from countries such as China.

“His speech misled the European parliamentarians and the public, which once again reflects his bias and hostility against China,” the embassy said.

“We firmly oppose any speech and action from the parliamentarians to impede the normal exchanges between the people of our two countries and disrupt the relationship between China and Europe.”

It is not the first time the Chinese embassy has taken issue with Senator Paterson. In 2019, China refused to allow Senator Paterson and his colleague, Liberal MP Andrew Hastie, into the country on a study tour planned by think tank China Matters.

At the time, the Chinese embassy said Senator Paterson and Mr Hastie would need to “repent and redress their mistakes” before they were granted visas.

Senator Paterson has been one of the most outspoken critics of the Chinese Communist Party, and was one of the founding members of the bipartisan group of MPs known as the Wolverines which was formed to speak up more about China’s growing assertiveness in the region.

He was also one of the first Liberal MPs to oppose the then-Turnbull government’s proposed extradition treaty with Beijing in 2017, which led to its demise.

The European Parliament is considering following Australia’s lead in legislating tougher measures to counter foreign interference and covert forms of foreign influence. It has named Australia’s Foreign Influence Transparency Scheme as a potential model to follow.

In the keynote speech delivered virtually last week to European parliamentarians, Senator Paterson said foreign interference “comes from many different sources and it so critically important that as democracies we recognise the threats and that we do everything we can to combat these threats”.

“This is aimed at counteracting a strategy by authoritarian states, most notably China with its Belt and Road deal, to seek to divide us internally between different levels of government,” he said.