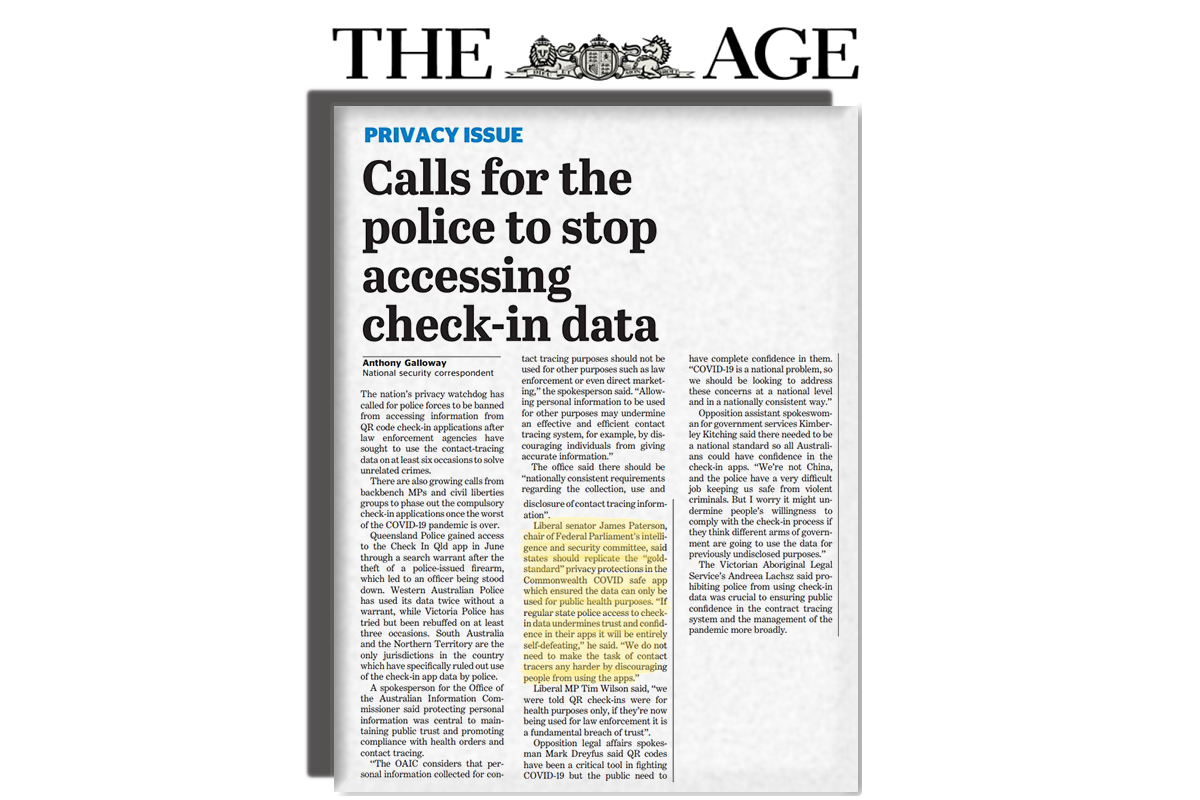 There are also growing calls from backbench MPs and civil liberties groups to phase out the compulsory check-in applications once the worst of the COVID-19 pandemic is over.

Queensland Police gained access to the Check In Qld app in June through a search warrant after the theft of a police-issued firearm, which led to an officer being stood down. Western Australian Police has used its data twice without a warrant, while Victoria Police has tried but been rebuffed on at least three occasions.

South Australia and the Northern Territory are the only jurisdictions in the country which have specifically ruled out the use of the check-in app data by police.

A spokesperson for the Office of the Australian Information Commissioner said protecting personal information was central to maintaining public trust and promoting compliance with health orders and contact tracing.

“The OAIC considers that personal information collected for contact-tracing purposes should not be used for other purposes such as law enforcement or even direct marketing,” the spokesperson said.

“Allowing personal information to be used for other purposes may undermine an effective and efficient contact-tracing system, for example, by discouraging individuals from giving accurate information.”

The OAIC said there should be “nationally consistent requirements regarding the collection, use and disclosure of contact-tracing information”.

Liberal senator James Paterson, chair of federal Parliament’s intelligence and security committee, said states should replicate the “gold-standard” privacy protections in the Commonwealth COVID safe app which ensured the data can only be used for public health purposes.

“If regular state police access to check-in data undermines trust and confidence in their apps it will be entirely self-defeating,” he said. “We do not need to make the task of contact tracers any harder by discouraging people from using the apps.”

Liberal MP Tim Wilson said, “we were told QR check-ins were for health purposes only, if they’re now being used for law enforcement it is a fundamental breach of trust”.

“The fastest way to break public confidence and willingness to ‘check in’ is to rake the data for secondary purposes we were explicitly told would not happen.”

Liberal senator Gerard Rennick said he was not against contact tracing but state governments needed to start respecting people’s privacy.

“It should only be for COVID reasons, that’s why it was introduced. Police have been able to solve crimes in the past, so there is no reason why they can’t solve crimes now,” he said. “It leads to the bigger issues of trust in government.”

Senator Rennick said an agreement was needed to phase out measures such as compulsory QR code check-ins as part of national cabinet’s agreed four-phase plan to open up the country.

Liberal MP Jason Falinski said the “bigger issue here is the health outcome, and if you start collecting this data for other reasons, then people are going to stop checking in”.

Opposition legal affairs spokesman Mark Dreyfus said QR codes had been a critical tool in fighting COVID-19, but members of the public needed to have complete confidence in them.

“COVID-19 is a national problem, and so we should be looking to address these concerns at a national level and in a nationally consistent way,” he said.

Opposition assistant spokeswoman for government services Kimberley Kitching said a national standard was needed so that all Australians could have confidence in the check-in apps.

“We’re not China, and the police have a very difficult job keeping us safe from violent criminals. But I worry that it might undermine people’s willingness to comply with the check-in process if they think different arms of government are going to use the data for previously undisclosed purposes”.

The Victorian Aboriginal Legal Service’s Andreea Lachsz said prohibiting police from using check-in data was crucial to ensuring public confidence in the contract tracing system and the management of the pandemic more broadly.

“The check-in system should only be used for as long as it is an effective tool in managing the pandemic,” she said. “If the national cabinet cannot agree to a joint approach, individual jurisdictions such as Victoria should show leadership and protect people’s data and privacy immediately.”