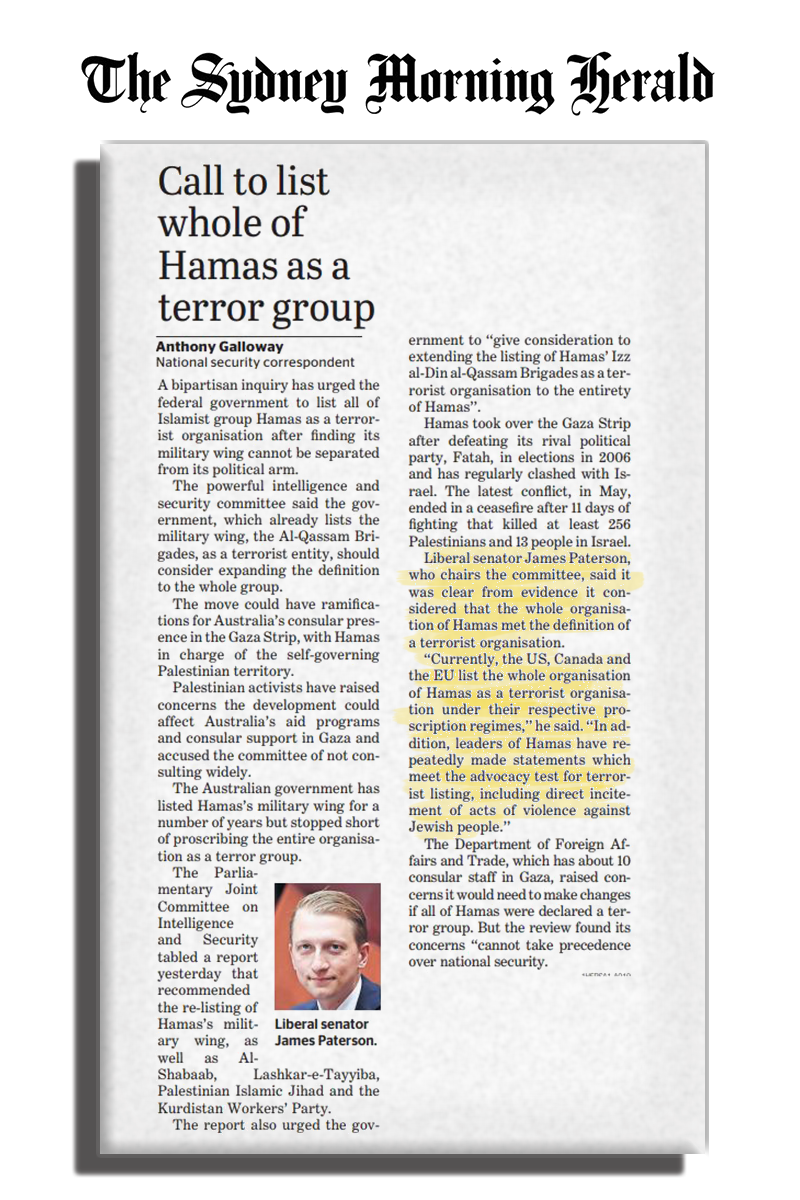 A bipartisan inquiry has urged the federal government to list all of Islamist group Hamas as a terrorist organisation after finding its military wing cannot be separated from its political arm.

The powerful intelligence and security committee said the government, which already lists the military wing, the Al-Qassam Brigades, as a terrorist entity, should consider expanding the definition to the whole group.

The move could have ramifications for Australia’s consular presence in the Gaza Strip, with Hamas in charge of the self-governing Palestinian territory.

Palestinian activists have raised concerns the development could affect Australia’s aid programs and consular support in Gaza and accused the committee of not consulting widely.

The Australian government has listed Hamas’s military wing for a number of years but stopped short of proscribing the entire organisation as a terror group.

The Parliamentary Joint Committee on Intelligence and Security tabled a report on Thursday that recommended the re-listing of Hamas’s military wing, as well as Al-Shabaab, Lashkar-e-Tayyiba, Palestinian Islamic Jihad and the Kurdistan Workers’ Party.

The report also urged the government to “give consideration to extending the listing of Hamas’ Izz al-Din al-Qassam Brigades as a terrorist organisation to the entirety of Hamas”.

Hamas took over the Gaza Strip after defeating its rival political party, Fatah, in elections in 2006 and has regularly clashed with Israel. The latest conflict, in May, ended in a ceasefire after 11 days of fighting that killed at least 256 Palestinians and 13 people in Israel.

Liberal senator James Paterson, who chairs the committee, said it was clear from evidence it considered that the whole organisation of Hamas met the definition of a terrorist organisation.

“Currently, the US, Canada and the EU list the whole organisation of Hamas as a terrorist organisation under their respective proscription regimes,” he said. “The expert evidence provided to the committee overwhelmingly rejected the idea that Hamas’ Izz al-Din al-Qassam Brigades operates independently from the rest of the organisation.”

He said there was agreement among experts that Hamas operated as a singular entity with overlapping personnel, finances and structure.

“In addition, leaders of Hamas have repeatedly made statements which meet the advocacy test for terrorist listing, including direct incitement of acts of violence against Jewish people.”

In its submission to the inquiry, the Zionist Federation of Australia said the military wing could not be separated from Hamas.

“Second, even if the false distinction between the Brigades and the rest of Hamas is maintained, the non-Brigades part of Hamas directly or indirectly prepares, plans and assists in the doing of terrorist acts, through recruitment, procurement of arms and finances, and vocal encouragement for the Brigades,” the ZFA said.

The Department of Foreign Affairs and Trade, which has a small consular operation of about 10 people in Gaza, raised concerns it would need to make changes if all of Hamas were declared a terror group.

Mike Burgess, director-general of the Australian Security and Intelligence Organisation, said he would be supportive of expanding the listing of Hamas but noted it would be of no operational benefit to his agency.

Bishop George Browning, president of the Australia Palestine Advocacy Network, said the committee “failed in its duty by discounting government agency concerns about the impact on humanitarian or peace negotiations”.

“Additionally they have only sought out evidence from pro-Israeli perspectives and regurgitated this biased information as fact while failing to integrate Palestinian or international law perspectives,” he said. “The minister must disregard the committee’s report and ensure any decision is informed by experts that do not have a political barrow to push.”

Australia/Israel & Jewish Affairs Council chief executive Colin Rubenstein welcomed the committee’s recommendation, saying his organisation had argued for many years that Hamas must be treated as one entity.

“All of Hamas has been and remains committed to using terrorism to achieve its ends,” he said.

The development comes after the committee in June made a similar recommendation to list all of Lebanese militant group Hezbollah as a terrorist organisation.

The decision to proscribe a terrorist organisation lies with Australia’s Governor-General, on the advice of the government, which then criminalises any membership or association with that group. Other groups on the list include Al-Qaeda and Islamic State.