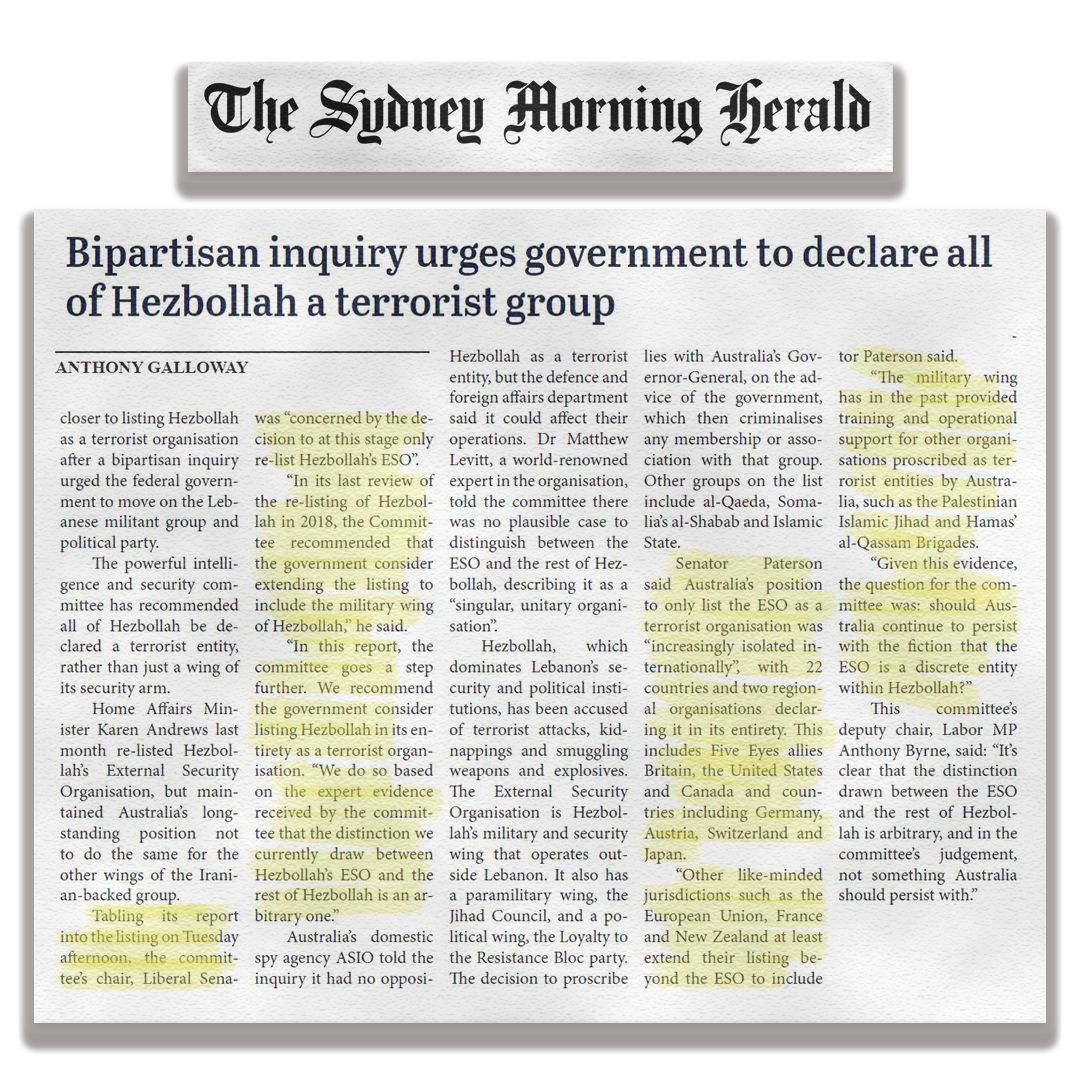 Australia is one step closer to listing Hezbollah as a terrorist organisation after a bipartisan inquiry urged the federal government to move on the Lebanese militant group and political party.The powerful intelligence and security committee has recommended all of Hezbollah be declared a terrorist entity, rather than just a wing of its security arm.

Home Affairs Minister Karen Andrews last month re-listed Hezbollah’s External Security Organisation, but maintained Australia’s longstanding position not to do the same for the other wings of the Iranian-backed group.Tabling its report into the listing on Tuesday afternoon, the committee’s chair, Liberal Senator James Paterson, said it was “concerned by the decision to at this stage only re-list Hezbollah’s ESO”.

“In its last review of the re-listing of Hezbollah in 2018, the Committee recommended that the government consider extending the listing to include the military wing of Hezbollah,” he said.

“In this report, the committee goes a step further. We recommend the government consider listing Hezbollah in its entirety as a terrorist organisation.“We do so based on the expert evidence received by the committee that the distinction we currently draw between Hezbollah’s ESO and the rest of Hezbollah is an arbitrary one.”Australia’s domestic spy agency ASIO told the inquiry it had no opposition to the country listing Hezbollah as a terrorist entity, but the defence and foreign affairs department said it could affect their operations.Dr Matthew Levitt, a world-renowned expert in the organisation, told the committee there was no plausible case to distinguish between the ESO and the rest of Hezbollah, describing it as a “singular, unitary organisation”.Hezbollah, which dominates Lebanon’s security and political institutions, has been accused of terrorist attacks, kidnappings and smuggling weapons and explosives. The External Security Organisation is Hezbollah’s military and security wing that operates outside Lebanon. It also has a paramilitary wing, the Jihad Council, and a political wing, the Loyalty to the Resistance Bloc party.The decision to proscribe a terrorist organisation lies with Australia’s Governor-General, on the advice of the government, which then criminalises any membership or association with that group. Other groups on the list include al-Qaeda, Somalia’s al-Shabab and Islamic State.Senator Paterson said Australia’s position to only list the ESO as a terrorist organisation was “increasingly isolated internationally”, with 22 countries and two regional organisations declaring it in its entirety. This includes Five Eyes allies Britain, the United States and Canada and countries including Germany, Austria, Switzerland and Japan.

“Other like-minded jurisdictions such as the European Union, France and New Zealand at least extend their listing beyond the ESO to include the military wing,” Senator Paterson said.

“The military wing has in the past provided training and operational support for other organisations proscribed as terrorist entities by Australia, such as the Palestinian Islamic Jihad and Hamas’ al-Qassam Brigades.“Given this evidence, the question for the committee was: should Australia continue to persist with the fiction that the ESO is a discrete entity within Hezbollah?”This committee’s deputy chair, Labor MP Anthony Byrne, said: “It’s clear that the distinction drawn between the ESO and the rest of Hezbollah is arbitrary, and in the committee’s judgement, not something Australia should persist with.”