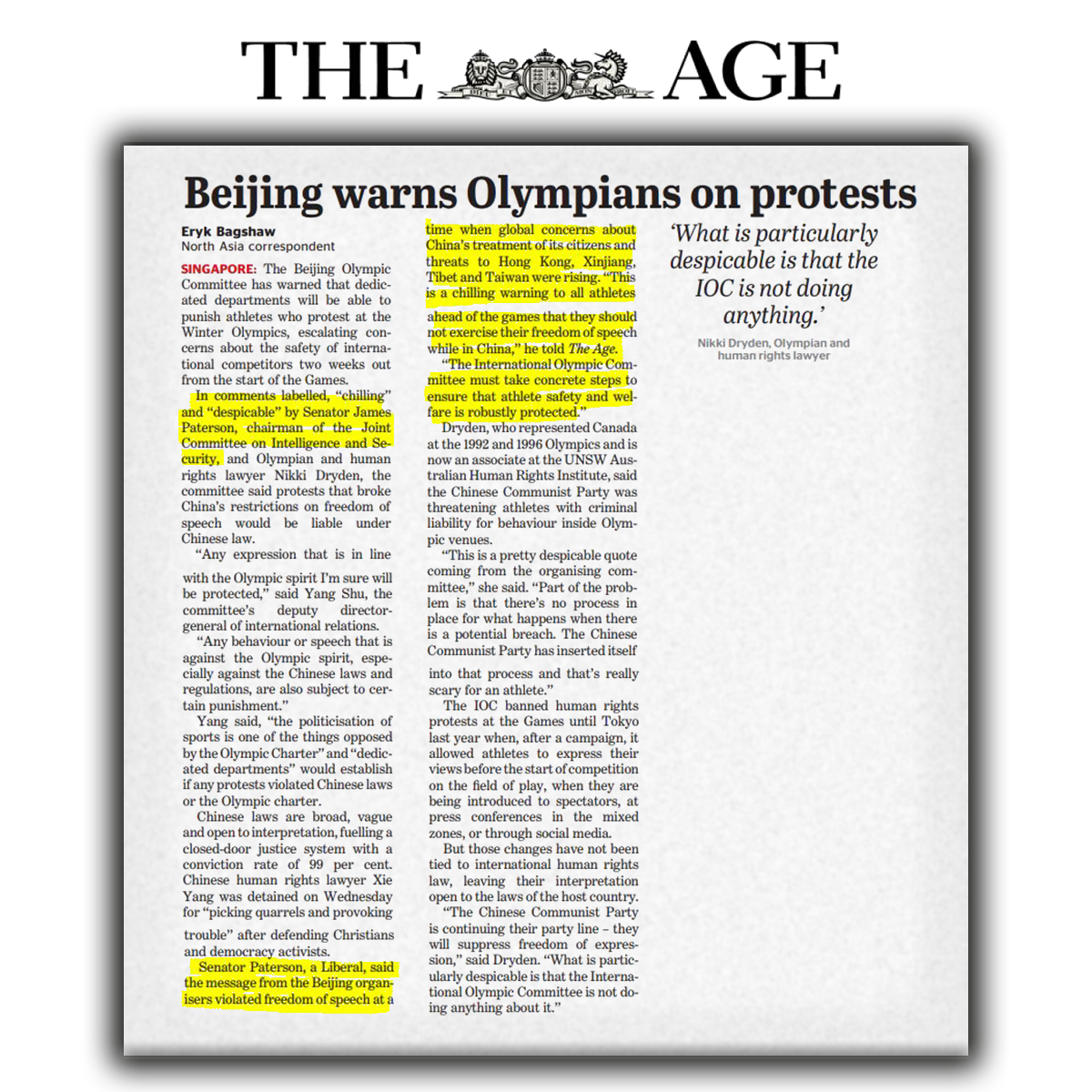 Singapore: The Beijing Olympic Committee has warned that dedicated departments will be able to punish athletes who protest at the Winter Olympics, escalating concerns about the safety of international competitors two weeks out from the start of the Games.

In comments labelled, “chilling” and “despicable” by the chair of the Australian Joint Committee on Intelligence and Security, James Paterson, and Olympian and human rights lawyer Nikki Dryden, the BOC said protests that broke China’s restrictions on freedom of speech would be liable under Chinese law.

“Any expression that is in line with the Olympic spirit I’m sure will be protected,” said Yang Shu, the BOC’s deputy director-general of international relations.

“Any behaviour or speech that is against the Olympic spirit, especially against the Chinese laws and regulations, are also subject to certain punishment.”

Yang said, “the politicisation of sports is one of the things opposed by the Olympic Charter” and that “dedicated departments” would establish if any protests violated Chinese laws or the Olympic regulations.

Chinese laws are broad, vague and open to interpretation, fuelling a closed-door justice system with a conviction rate of 99 per cent. Chinese human rights lawyer Xie Yang was detained on Wednesday for “picking quarrels and provoking trouble” after defending Christians and democracy activists. In Hong Kong in July 2020, eight were arrested after holding up blank pieces of paper at a mall in protest against national security laws imposed by Beijing. Chinese-Australians Yang Hengjun and Cheng Lei remain in jail years after they were first detained on vague national security charges after criticising the Chinese government.

Paterson, a Liberal senator, said the message from the Beijing organisers violated freedom of speech at a time when global concerns about China’s treatment of its citizens and threats to Hong Kong, Xinjiang, Tibet and Taiwan were rising.

“This is a chilling warning to all athletes ahead of the games that they should not exercise their freedom of speech while in China,” he told The Sydney Morning Herald and The Age.

“The International Olympic Committee must take concrete steps to ensure that athlete safety and welfare is robustly protected during the games and should never again agree to hold them in any jurisdiction where that cannot be guaranteed.”

Dryden, who represented Canada at the 1992 and 1996 Olympics and is now an associate at the UNSW Australian Human Rights Institute, said the Chinese Communist Party was threatening athletes with criminal liability for behaviour inside Olympic venues.

“This is a pretty despicable quote coming from the organising committee,” she said. “Part of the problem is that there’s no process in place for what happens when there is a potential breach. The Chinese Communist Party has inserted itself into that process and that’s really scary for an athlete.”

The IOC banned human rights protests at the Games altogether until Tokyo last year when a campaign to insert amendments to the charter forced it to allow athletes to express their views before the start of competition on the field of play, when they are being introduced to spectators, at press conferences in the mixed zones or through social media.

But those changes have not been tied to international human rights law, leaving their interpretation on issues such as freedom of speech open to the local laws defined by the host country.

“The Chinese Communist Party is continuing their party line – they will suppress freedom of expression – that part is not necessarily surprising,” said Dryden. “I think what is particularly despicable is that the International Olympic Committee is not doing anything about it.”

Chinese Olympian Peng Shuai, who made sexual assault allegations against former Chinese vice-premier Zhang Gaoli in November, has had her name and claims scrubbed from Chinese social media. The IOC has hosted two video calls with the athlete to verify her whereabouts but the Women’s Tennis Association, players and coaches have been unable to contact the former doubles world number 1.

Zoë Bedford, the executive officer of the Australia Tibet Council, said she was concerned for the safety of athletes if they decided to speak out in Beijing.

“There is no guarantee that they won’t be arrested and subject to China’s draconian laws – many people, Tibetans, Uighurs, Hongkongers and Chinese citizens have been arrested for simply making the smallest protest of expression of freedom in China,” she said.

The threat follows rising warnings about the security of devices in Beijing. An app that all participants must download includes a list of keywords – such as Tiananmen Square massacre, Xinjiang and Tibet – that can trigger surveillance, and a feature that allows users to report “politically sensitive” content.

The US, Dutch, Canadian, and British Olympic teams have told their athletes to take burner phones and laptops with them to the Games and leave their personal devices at home.

The Beijing organisers said the allegations of digital surveillance “have zero evidence and concerns are totally unnecessary”.

Limited crowds will be on hand to witness any athlete protests due to COVID-19 restrictions. Beijing called off all public ticket sales to events on Monday. The stands will now mostly be filled by Communist Party members, officials and public servants, but the global television audience is expected to reach more than 1 billion when the Games start on February 4.