Australia says WeChat has removed the account of its Prime Minister 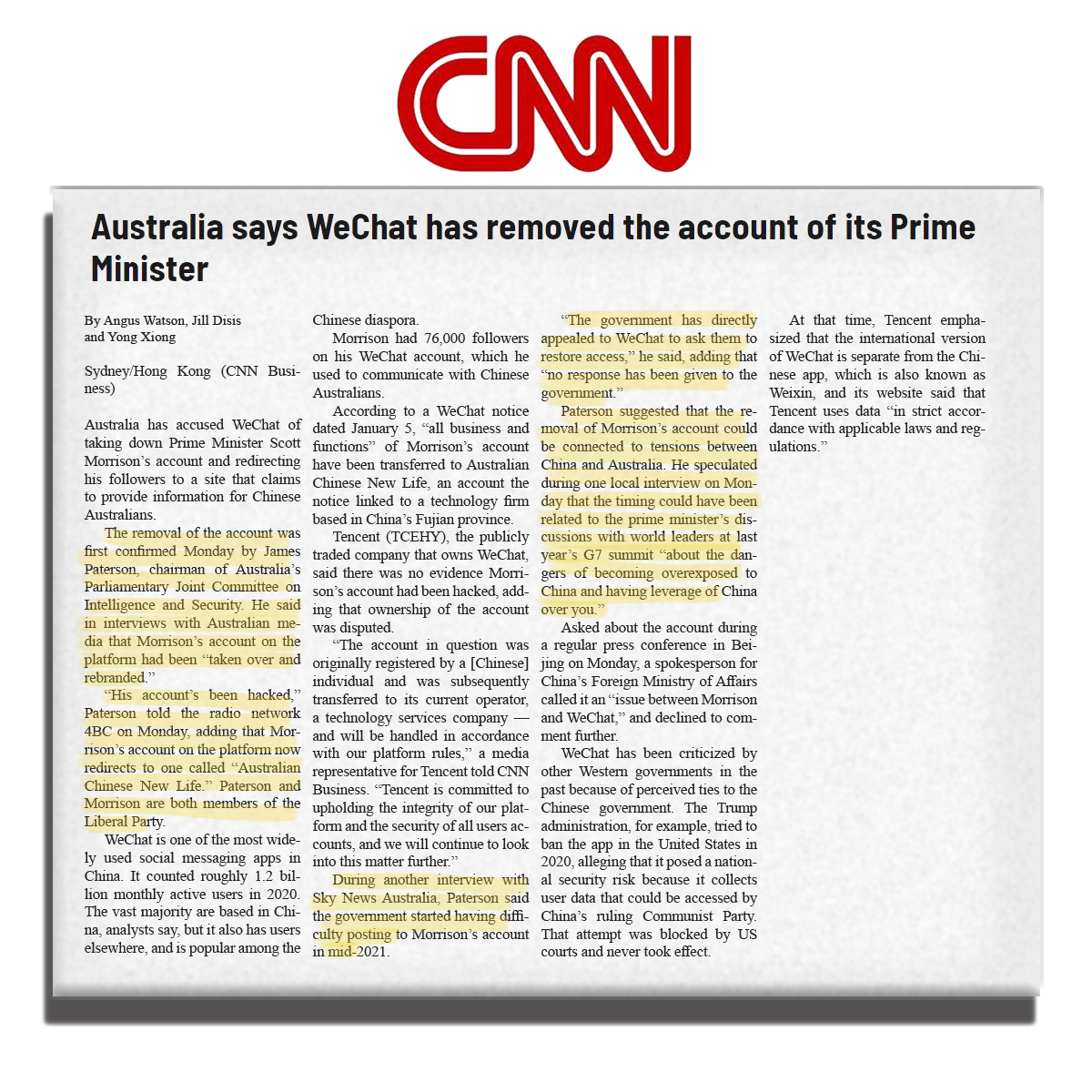 Sydney/Hong Kong (CNN Business)Australia has accused WeChat of taking down Prime Minister Scott Morrison's account and redirecting his followers to a site that claims to provide information for Chinese Australians.

The removal of the account was first confirmed Monday by James Paterson, chairman of Australia's Parliamentary Joint Committee on Intelligence and Security. He said in interviews with Australian media that Morrison's account on the platform had been "taken over and rebranded."

"His account's been hacked," Paterson told the radio network 4BC on Monday, adding that Morrison's account on the platform now redirects to one called "Australian Chinese New Life." Paterson and Morrison are both members of the Liberal Party.

WeChat is one of the most widely used social messaging apps in China. It counted roughly 1.2 billion monthly active users in 2020. The vast majority are based in China, analysts say, but it also has users elsewhere, and is popular among the Chinese diaspora.

Morrison had 76,000 followers on his WeChat account, which he used to communicate with Chinese Australians.

According to a WeChat notice dated January 5, "all business and functions" of Morrison's account have been transferred to Australian Chinese New Life, an account the notice linked to a technology firm based in China's Fujian province.

Tencent (TCEHY), the publicly traded company that owns WeChat, said there was no evidence Morrison's account had been hacked, adding that ownership of the account was disputed.

"The account in question was originally registered by a [Chinese] individual and was subsequently transferred to its current operator, a technology services company — and will be handled in accordance with our platform rules," a media representative for Tencent told CNN Business. "Tencent is committed to upholding the integrity of our platform and the security of all users accounts, and we will continue to look into this matter further."

During another interview with Sky News Australia, Paterson said the government started having difficulty posting to Morrison's account in mid-2021.

"The government has directly appealed to WeChat to ask them to restore access," he said, adding that "no response has been given to the government."

Paterson suggested that the removal of Morrison's account could be connected to tensions between China and Australia. He speculated during one local interview on Monday that the timing could have been related to the prime minister's discussions with world leaders at last year's G7 summit "about the dangers of becoming overexposed to China and having leverage of China over you."

Asked about the account during a regular press conference in Beijing on Monday, a spokesperson for China's Foreign Ministry of Affairs called it an "issue between Morrison and WeChat," and declined to comment further.

WeChat has been criticized by other Western governments in the past because of perceived ties to the Chinese government. The Trump administration, for example, tried to ban the app in the United States in 2020, alleging that it posed a national security risk because it collects user data that could be accessed by China's ruling Communist Party. That attempt was blocked by US courts and never took effect.

At that time, Tencent emphasized that the international version of WeChat is separate from the Chinese app, which is also known as Weixin, and its website said that Tencent uses data "in strict accordance with applicable laws and regulations."