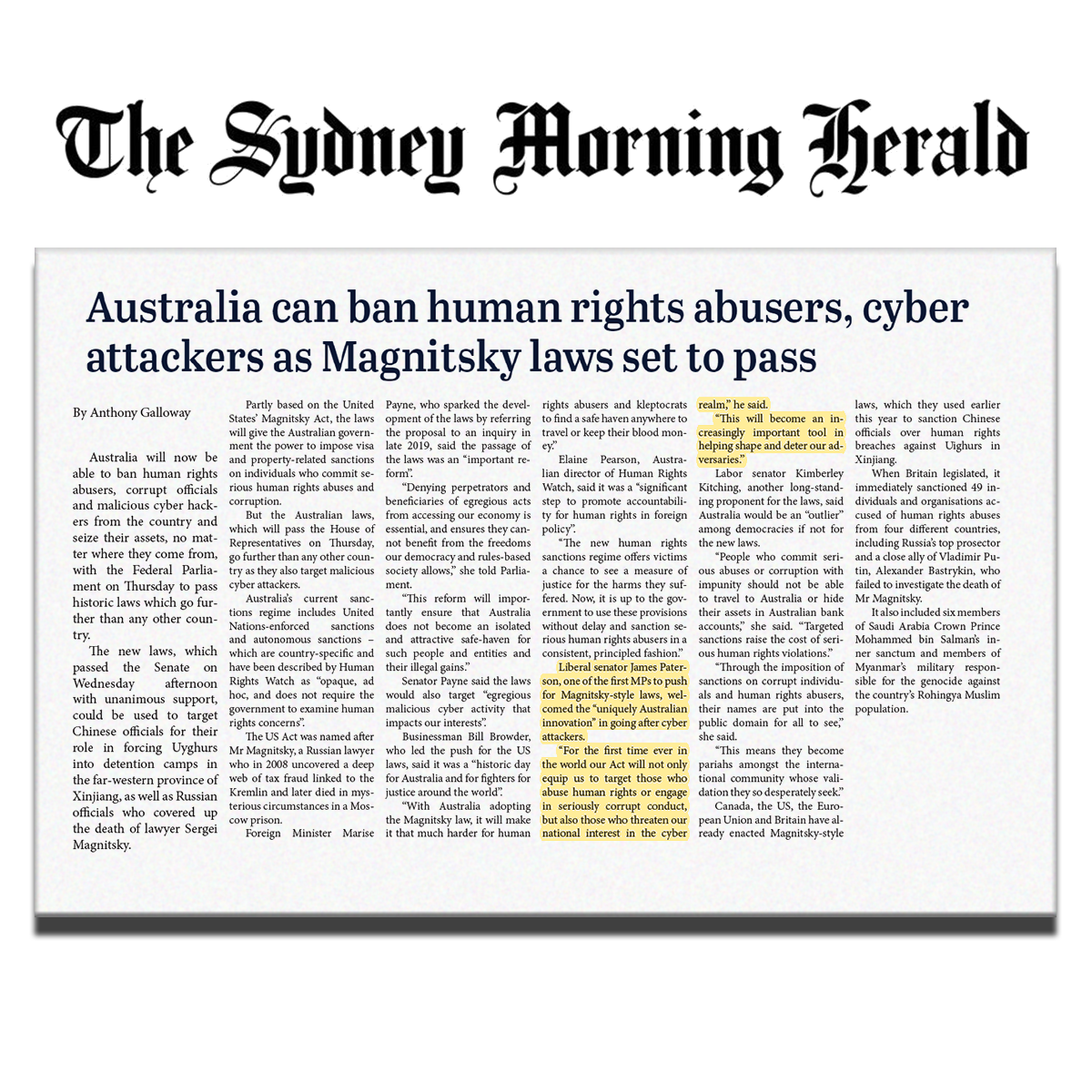 Australia will now be able to ban human rights abusers, corrupt officials and malicious cyber hackers from the country and seize their assets, no matter where they come from, with the Federal Parliament on Thursday to pass historic laws which go further than any other country.

The new laws, which passed the Senate on Wednesday afternoon with unanimous support, could be used to target Chinese officials for their role in forcing Uyghurs into detention camps in the far-western province of Xinjiang, as well as Russian officials who covered up the death of lawyer Sergei Magnitsky.

Partly based on the United States’ Magnitsky Act, the laws will give the Australian government the power to impose visa and property-related sanctions on individuals who commit serious human rights abuses and corruption.

But the Australian laws, which will pass the House of Representatives on Thursday, go further than any other country as they also target malicious cyber attackers.

Australia’s current sanctions regime includes United Nations-enforced sanctions and autonomous sanctions – which are country-specific and have been described by Human Rights Watch as “opaque, ad hoc, and does not require the government to examine human rights concerns”.

The US Act was named after Mr Magnitsky, a Russian lawyer who in 2008 uncovered a deep web of tax fraud linked to the Kremlin and later died in mysterious circumstances in a Moscow prison.

Foreign Minister Marise Payne, who sparked the development of the laws by referring the proposal to an inquiry in late 2019, said the passage of the laws was an “important reform”.

“Denying perpetrators and beneficiaries of egregious acts from accessing our economy is essential, and ensures they cannot benefit from the freedoms our democracy and rules-based society allows,” she told Parliament.

“This reform will importantly ensure that Australia does not become an isolated and attractive safe-haven for such people and entities and their illegal gains.”

Businessman Bill Browder, who led the push for the US laws, said it was a “historic day for Australia and for fighters for justice around the world”.

“With Australia adopting the Magnitsky law, it will make it that much harder for human rights abusers and kleptocrats to find a safe haven anywhere to travel or keep their blood money.”

Elaine Pearson, Australian director of Human Rights Watch, said it was a “significant step to promote accountability for human rights in foreign policy”.

“People who commit serious abuses or corruption with impunity should not be able to travel to Australia or hide their assets in Australian bank accounts,” she said. “Targeted sanctions raise the cost of serious human rights violations.”

“The new human rights sanctions regime offers victims a chance to see a measure of justice for the harms they suffered. Now, it is up to the government to use these provisions without delay and sanction serious human rights abusers in a consistent, principled fashion.”

Liberal senator James Paterson, one of the first MPs to push for Magnitsky-style laws, welcomed the “uniquely Australian innovation” in going after cyber attackers.

“For the first time ever in the world our Act will not only equip us to target those who abuse human rights or engage in seriously corrupt conduct, but also those who threaten our national interest in the cyber realm,” he said.

“This will become an increasingly important tool in helping shape and deter our adversaries.”

Labor senator Kimberley Kitching, another long-standing proponent for the laws, said Australia would be an “outlier” among democracies if not for the new laws.

“Through the imposition of sanctions on corrupt individuals and human rights abusers, their names are put into the public domain for all to see,” she said.

“This means they become pariahs amongst the international community whose validation they so desperately seek.”

Canada, the US, the European Union and Britain have already enacted Magnitsky-style laws, which they used earlier this year to sanction Chinese officials over human rights breaches against Uighurs in Xinjiang.

When Britain legislated, it immediately sanctioned 49 individuals and organisations accused of human rights abuses from four different countries, including Russia’s top prosector and a close ally of Vladimir Putin, Alexander Bastrykin, who failed to investigate the death of Mr Magnitsky.