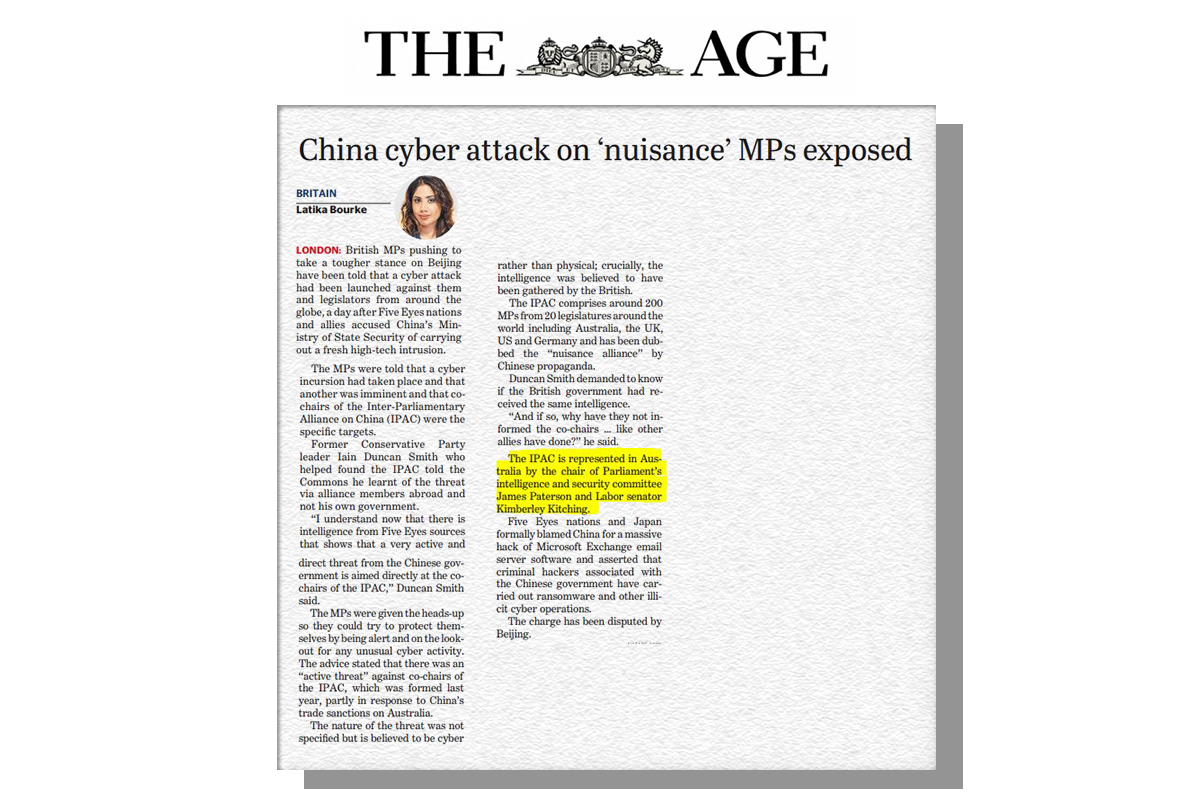 The MPs were told that a successful intrusion had taken place and that another was imminent and that co-chairs of the Inter-Parliamentary Alliance on China (IPAC) were the specific targets.

Former Conservative Party leader Sir Iain Duncan Smith who helped found the IPAC told the Commons that he had only learnt of the threat via his IPAC colleagues and not from his own government.

“I understand now that there is intelligence from Five Eyes sources that shows that a very active and direct threat from the Chinese government is aimed directly at the co-chairs of the IPAC,” Duncan Smith said.

The foreign MPs were given the heads-up so they could try to protect themselves by being alert and on the lookout for any unusual cyber activity.

The advice stated that there was an “active threat” against co-chairs of the IPAC, which was formed last year, partly in response to China’s trade sanctions on Australia.

The IPAC comprises around 200 MPs from 20 legislatures around the world including Australia, the UK, US and Germany and has been dubbed the “nuisance alliance” by Chinese propaganda.

The nature of the threat was not specified but is believed to be cyber rather than physical; crucially, the intelligence was believed to have been gathered by the British.

Duncan Smith demanded to know if the British government had received the same intelligence.

“And if so, why have they not informed the co-chairs and others here like other allies have done?” he said.

The IPAC is represented in Australia by the chair of Parliament’s Intelligence and Security Committee James Paterson and Labor Senator Kimberley Kitching.

Five Eyes nations and Japan formally blamed China for a massive hack of Microsoft Exchange email server software and asserted that criminal hackers associated with the Chinese government have carried out ransomware and other illicit cyber operations. The charge has been disputed by Beijing.

Earlier this year, IPAC reported to Britain’s National Cyber Security Centre, a major cyber attack it had suffered in March, which took down its website for several hours.

Junior minister James Cleverly said he would not discuss intelligence in public. Cleverly was responding to urgent questions from backbenchers about the Microsoft hack.

The hack of the Microsoft Exchange, which began in January, gave the Chinese access to tens of thousands of computers around the world. Five Eyes countries, Japan, the EU and NATO all named China as the culprit in the first joint attribution that the democracies have made.

A grand jury in the US indicted three Chinese security officials over hacks of companies, universities and foreign government entities.

MPs from all parties slammed the government for not announcing any sanctions or charges like the US has done.

Speaking separately to a Chatham House audience, Kevin Rudd said cyber attacks waged by authoritarian regimes were a “regular reality” when he was prime minister.

“Certainly in our periods in office, it was an active and real concern,” he told former Labour frontbencher David Miliband.