Without risks, it's not a free country 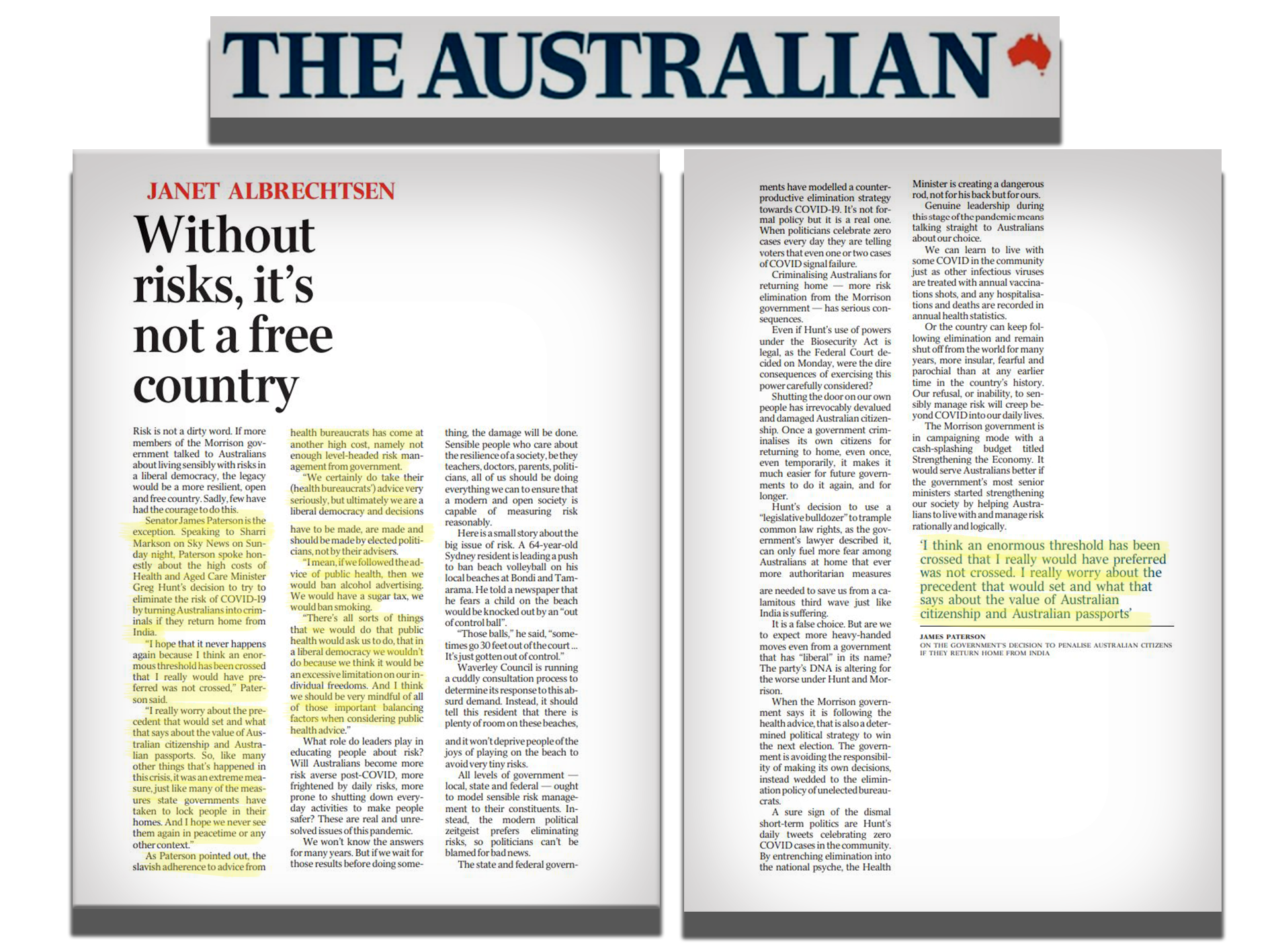 Janet Albrechtsen - The Australian - Wednesday 12 May 2021

Risk is not a dirty word. If more members of the Morrison government talked to Australians about living sensibly with risks in a liberal democracy, the legacy would be a more resilient, open and free country. Sadly, few have had the courage to do this.

Senator James Paterson is the exception. Speaking to Sharri Markson on Sky News on Sunday night, Paterson spoke honestly about the high costs of Health and Aged Care Minister Greg Hunt’s decision to try to eliminate the risk of COVID-19 by turning Australians into criminals if they return home from India.

“I hope that it never happens again because I think an enormous threshold has been crossed that I really would have preferred was not crossed,” Paterson said.

“I really worry about the precedent that would set and what that says about the value of Australian citizenship and Australian passports. So, like many other things that’s happened in this crisis, it was an extreme measure, just like many of the measures state governments have taken to lock people in their homes. And I hope we never see them again in peacetime or any other context.”

As Paterson pointed out, the slavish adherence to advice from health bureaucrats has come at another high cost, namely not enough level-headed risk management from government.

“We certainly do take their (health bureaucrats’) advice very seriously, but ultimately we are a liberal democracy and decisions have to be made, are made and should be made by elected politicians, not by their advisers.

“I mean, if we followed the advice of public health, then we would ban alcohol advertising. We would have a sugar tax, we would ban smoking.

“There’s all sorts of things that we would do that public health would ask us to do, that in a liberal democracy we wouldn’t do because we think it would be an excessive limitation on our individual freedoms. And I think we should be very mindful of all of those important balancing factors when considering public health advice.”

What role do leaders play in educating people about risk? Will Australians become more risk averse post-COVID, more frightened by daily risks, more prone to shutting down everyday activities to make people safer? These are real and unresolved issues of this pandemic.

We won’t know the answers for many years. But if we wait for those results before doing something, the damage will be done. Sensible people who care about the resilience of a society, be they teachers, doctors, parents, politicians, all of us should be doing everything we can to ensure that a modern and open society is capable of measuring risk reasonably.

Here is a small story about the big issue of risk. A 64-year-old Sydney resident is leading a push to ban beach volleyball on his local beaches at Bondi and Tamarama. He told a newspaper that he fears a child on the beach would be knocked out by an “out of control ball”.

“Those balls,” he said, “sometimes go 30 feet out of the court … It’s just gotten out of control.”

Waverley Council is running a cuddly consultation process to determine its response to this absurd demand. Instead, it should tell this worrywart resident that there is plenty of room on these beaches, and it won’t deprive people of the joys of playing on the beach to avoid very tiny risks.

All levels of government — local, state and federal — ought to model sensible risk management to their constituents. Instead, the modern political zeitgeist prefers eliminating risks, so politicians can’t be blamed for bad news.

The state and federal governments have modelled a counterproductive elimination strategy towards COVID-19. It’s not formal policy but it is a real one. When politicians celebrate zero cases every day they are telling voters that even one or two cases of COVID signal failure.

Even if Hunt’s use of powers under the Biosecurity Act is legal, as the Federal Court decided on Monday, were the dire consequences of exercising this power carefully considered?

Shutting the door on our own people has irrevocably devalued and damaged Australian citizenship. Once a government criminalises its own citizens for returning to home, even once, even temporarily, it makes it much easier for future governments to do it again, and for longer.

Hunt’s decision to use a “legislative bulldozer” to trample common law rights, as the government’s lawyer described it, can only fuel more fear among Australians at home that ever more authoritarian measures are needed to save us from a calamitous third wave just like India is suffering.

It is a false choice. But are we to expect more heavy-handed moves even from a government that has “liberal” in its name? The party’s DNA is altering for the worse under Hunt and Morrison.

When the Morrison government says it is following the health advice, that is also a determined political strategy to win the next election. The government is avoiding the responsibility of making its own decisions, instead wedded to the elimination policy of unelected bureaucrats.

A sure sign of the dismal short-term politics are Hunt’s daily tweets celebrating zero COVID cases in the community. By entrenching elimination into the national psyche, the Health Minister is creating a dangerous rod, not for his back but for ours.

Genuine leadership during this stage of the pandemic means talking straight to Australians about our choice.

We can learn to live with some COVID in the community just as other infectious viruses are treated with annual vaccinations shots, and any hospitalisations and deaths are recorded in annual health statistics.

Or the country can keep following elimination and remain shut off from the world for many years, more insular, fearful and parochial than at any earlier time in the country’s history. Our refusal, or inability, to sensibly manage risk will creep beyond COVID into our daily lives.

The Morrison government is in campaigning mode with a cash-splashing budget titled Strengthening the Economy. It would serve Australians better if the government’s most senior ministers started strengthening our society by helping Australians to live with and manage risk rationally and logically.