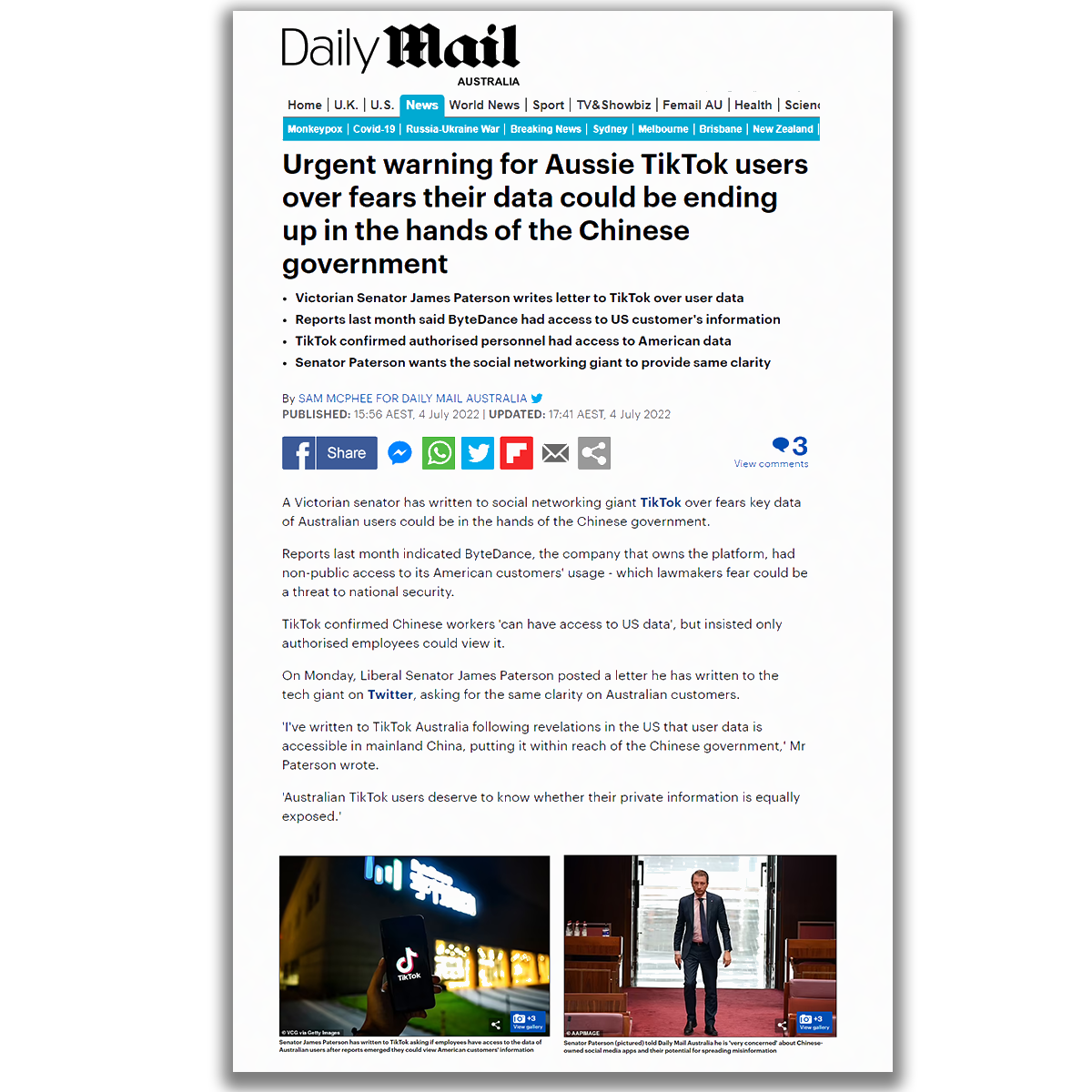 A Victorian senator has written to social networking giant TikTok over fears key data of Australian users could be in the hands of the Chinese government.

Reports last month indicated ByteDance, the company that owns the platform, had non-public access to its American customers' usage - which lawmakers fear could be a threat to national security.

TikTok confirmed Chinese workers 'can have access to US data', but insisted only authorised employees could view it.

On Monday, Liberal Senator James Paterson posted a letter he has written to the tech giant on Twitter, asking for the same clarity on Australian customers.

'I've written to TikTok Australia following revelations in the US that user data is accessible in mainland China, putting it within reach of the Chinese government,' Mr Paterson wrote.

'Australian TikTok users deserve to know whether their private information is equally exposed.'

'I'm concerned because I suspect a lot of the users aren't aware of the ownership of these companies,' he said.

'Bytedancer are beholden to the Chinese Community Party. If asked by the CCP they'd almost certainly hand data over, they're compelled to.'

Senator Paterson said there are question marks over the algorithm used by TikTok which sees them have the power over which trends to promote and suppress.

'Potentially millions of young Australians don't realise how vulnerable they are,' he told Daily Mail Australia.

'They aren't transparent about the algorithm... which means they can distribute misinformation or suppress information about their human rights record.'

Senator Paterson's letter is addressed to Lee Hunter, the General Manager of TikTok Australia, and the company's Director of Public Policy Brent Thomas.

He pointed to comments from TikTok's CEO Shou Zi Chew, who admitted the data of its US users was able to be viewed by authorised personnel and asked for the same information on Aussie subscribers.

'Could you please confirm is Australian user data also accessible by TikTok or ByteDance employees in mainland China? Has that data been previousky accessed?' Senator Paterson asked.

'If so, on what basis could they refuse a request from the Chinese government under the National Security Law for access to that Australian user data?'

He then acknowledged comments to Australian Parliament in July, 2020 where TikTok said the data was stored in Singapore and the United States, and data from Australian users would never be provided to the Chinese government.

'We now know it's irrelevant where it's stored. We have to treat all claims with skepticism,' he said.

Senator Paterson is Peter Dutton's new Shadow Minister for Cyber Security and Countering Foreign Interference, and will be tasked with managing the growing presence of China in the region.

TikTok said in June they were working with US cloud company Oracle to establish 'new advanced data security controls that we hope to finalize in the near future'.

Mr Zi Chew said while employees had access to US data, the workers were subject to 'robust cybersecurity controls and authorization approval protocols overseen by our US-based security team'.

TikTok has more than a billion active daily users, with the USA providing its largest market.

In 2020 the platform's chief information security officer Roland Clountier said: 'Our goal is to minimize data access across regions so that, for example, employees in the APAC region, including China, would have very minimal access to user data from the EU and US.'