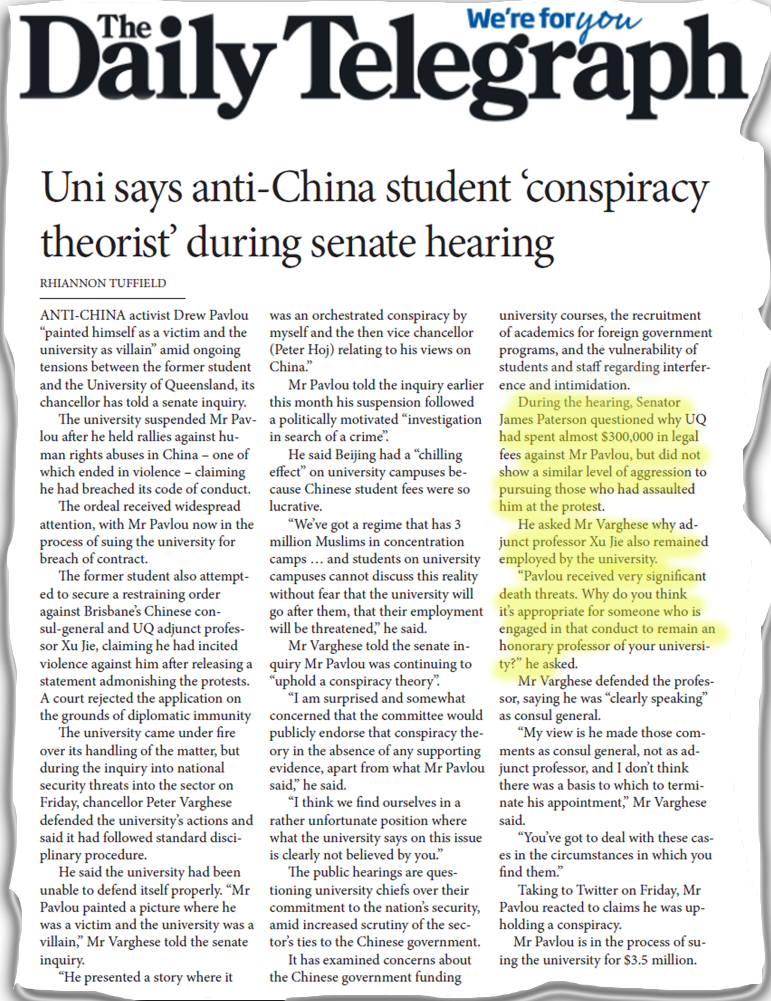 Anti-China activist Drew Pavlou “painted himself as a victim and the university as villain” amid ongoing tensions between the former student and the University of Queensland, its chancellor has told a senate inquiry.

The university suspended Mr Pavlou after he held rallies against human rights abuses in China – one of which ended in violence – claiming he had breached its code of conduct.The ordeal received widespread attention, with Mr Pavlou now in the process of suing the university for breach of contract.The former student also attempted to secure a restraining order against Brisbane’s Chinese consul-general and UQ adjunct professor Xu Jie, claiming he had incited violence against him after releasing a statement admonishing the protests. A court rejected the application on the grounds of diplomatic immunityThe university came under fire over its handling of the matter, but during the inquiry into national security threats into the sector on Friday, chancellor Peter Varghese defended the university’s actions and said it had followed standard disciplinary procedure.He said the university had been unable to defend itself properly.“Mr Pavlou painted a picture where he was a victim and the university was a villain,” Mr Varghese told the senate inquiry.“He presented a story where it was an orchestrated conspiracy by myself and the then vice chancellor (Peter Hoj) relating to his views on China.”Mr Pavlou told the inquiry earlier this month his suspension followed a politically motivated “investigation in search of a crime”.He said Beijing had a “chilling effect” on university campuses because Chinese student fees were so lucrative.“We’ve got a regime that has 3 million Muslims in concentration camps … and students on university campuses cannot discuss this reality without fear that the university will go after them, that their employment will be threatened,” he said.Mr Varghese told the senate inquiry Mr Pavlou was continuing to “uphold a conspiracy theory”.“I am surprised and somewhat concerned that the committee would publicly endorse that conspiracy theory in the absence of any supporting evidence, apart from what Mr Pavlou said,” he said.“I think we find ourselves in a rather unfortunate position where what the university says on this issue is clearly not believed by you.”The public hearings are questioning university chiefs over their commitment to the nation’s security, amid increased scrutiny of the sector’s ties to the Chinese government.It has examined concerns about the Chinese government funding university courses, the recruitment of academics for foreign government programs, and the vulnerability of students and staff regarding interference and intimidation.During the hearing, Senator James Paterson questioned why UQ had spent almost $300,000 in legal fees against Mr Pavlou, but did not show a similar level of aggression to pursuing those who had assaulted him at the protest.He asked Mr Varghese why adjunct professor Xu Jie also remained employed by the university.“Pavlou received very significant death threats. Why do you think it’s appropriate for someone who is engaged in that conduct to remain an honorary professor of your university?” he asked.Mr Varghese defended the professor, saying he was “clearly speaking” as consul general.“My view is he made those comments as consul general, not as adjunct professor, and I don’t think there was a basis to which to terminate his appointment,” Mr Varghese said.“You’ve got to deal with these cases in the circumstances in which you find them.”Taking to Twitter on Friday, Mr Pavlou reacted to claims he was upholding a conspiracy.Mr Pavlou is in the process of suing the university for $3.5 million.