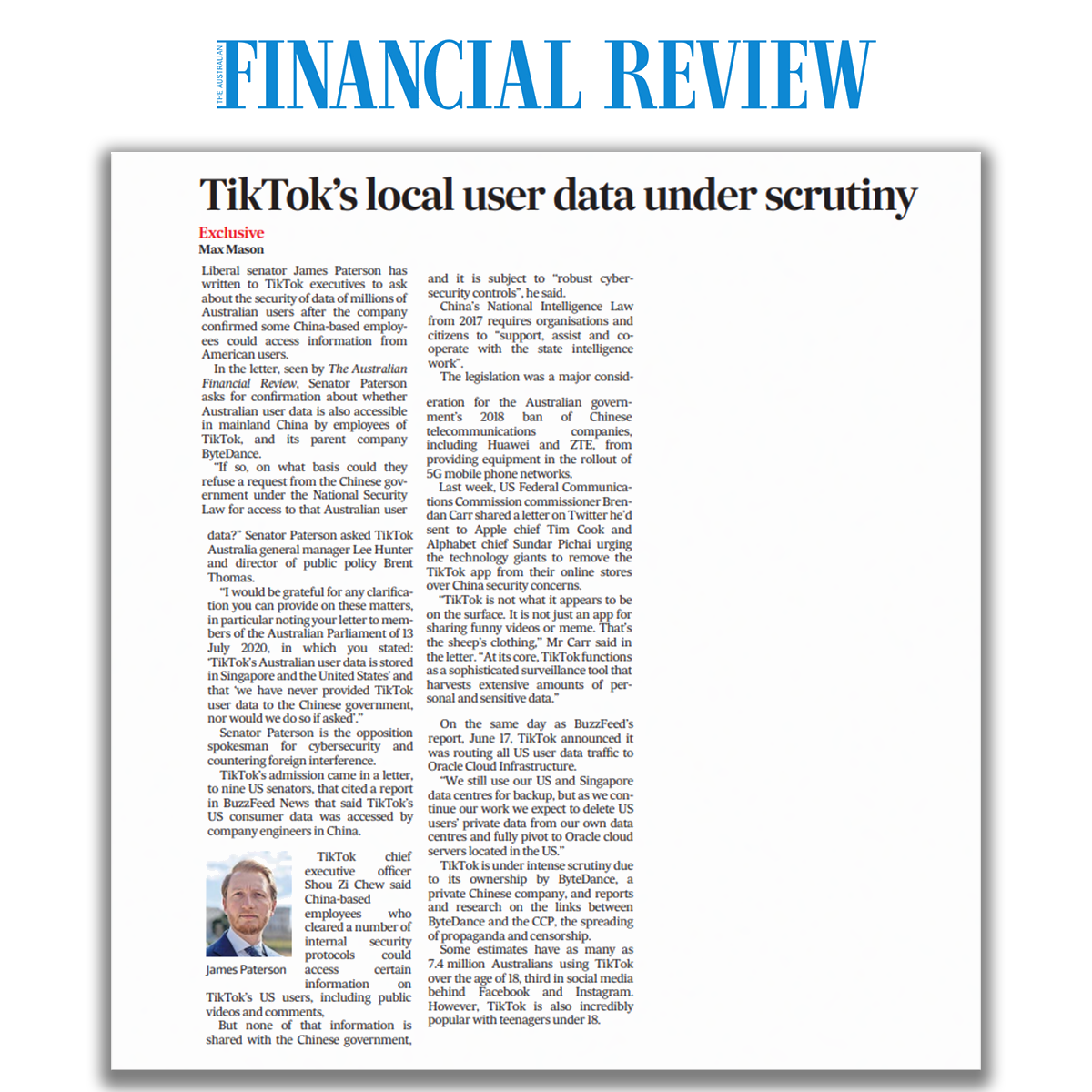 Liberal senator James Paterson has written to Australian TikTok executives to ask about the security of data of millions of Australian users, after the company confirmed some China-based employees could access information from American users.

In the letter, seen by The Australian Financial Review, Senator Paterson asks for confirmation about whether Australian user data is also accessible in mainland China by employees of TikTok and its parent company ByteDance.

“If so, on what basis could they refuse a request from the Chinese government under the National Security Law for access to that Australian user data?” Senator Paterson wrote to TikTok Australia general manager Lee Hunter and director of public policy Brent Thomas.

“I would be grateful for any clarification you can provide on these matters, in particular noting your letter to members of the Australian parliament of 13 July 2020, in which you stated: “TikTok’s Australian user data is stored in Singapore and the United States” and that “we have never provided TikTok user data to the Chinese government, nor would we do so if asked”.

Senator Paterson is the opposition spokesman for cybersecurity and countering foreign interference.

TikTok’s admission came in a letter, seen by the Financial Review, to nine US senators, cited a report in BuzzFeed News that said TikTok’s US consumer data was accessed by company engineers in China.

But he said none of that information is shared with the Chinese government, and it is subject to “robust cybersecurity controls”.

China’s National Intelligence Law from 2017 requires organisations and citizens to “support, assist and co-operate with the state intelligence work”.

“TikTok is not what it appears to be on the surface. It is not just an app for sharing funny videos or meme. That’s the sheep’s clothing,” Mr Carr said in the letter.

“At its core, TikTok functions as a sophisticated surveillance tool that harvests extensive amounts of personal and sensitive data.”

On the same day as BuzzFeed’s report – June 17 – TikTok announced it was routing all US user data traffic to Oracle Cloud Infrastructure.

“We still use our US and Singapore data centres for backup, but as we continue our work we expect to delete US users’ private data from our own data centres and fully pivot to Oracle cloud servers located in the US.”

TikTok has come under intense scrutiny due to its ownership by ByteDance, a private Chinese company, and reports and research on the links between ByteDance and the CCP, and the spreading of propaganda and censorship.

Some estimates have as many as 7.4 million Australians over the age of 18 using TikTok – third in social media behind Facebook and Instagram, both owned by US parent Meta. However, TikTok is also incredibly popular with teenagers under 18.