Speak up about China 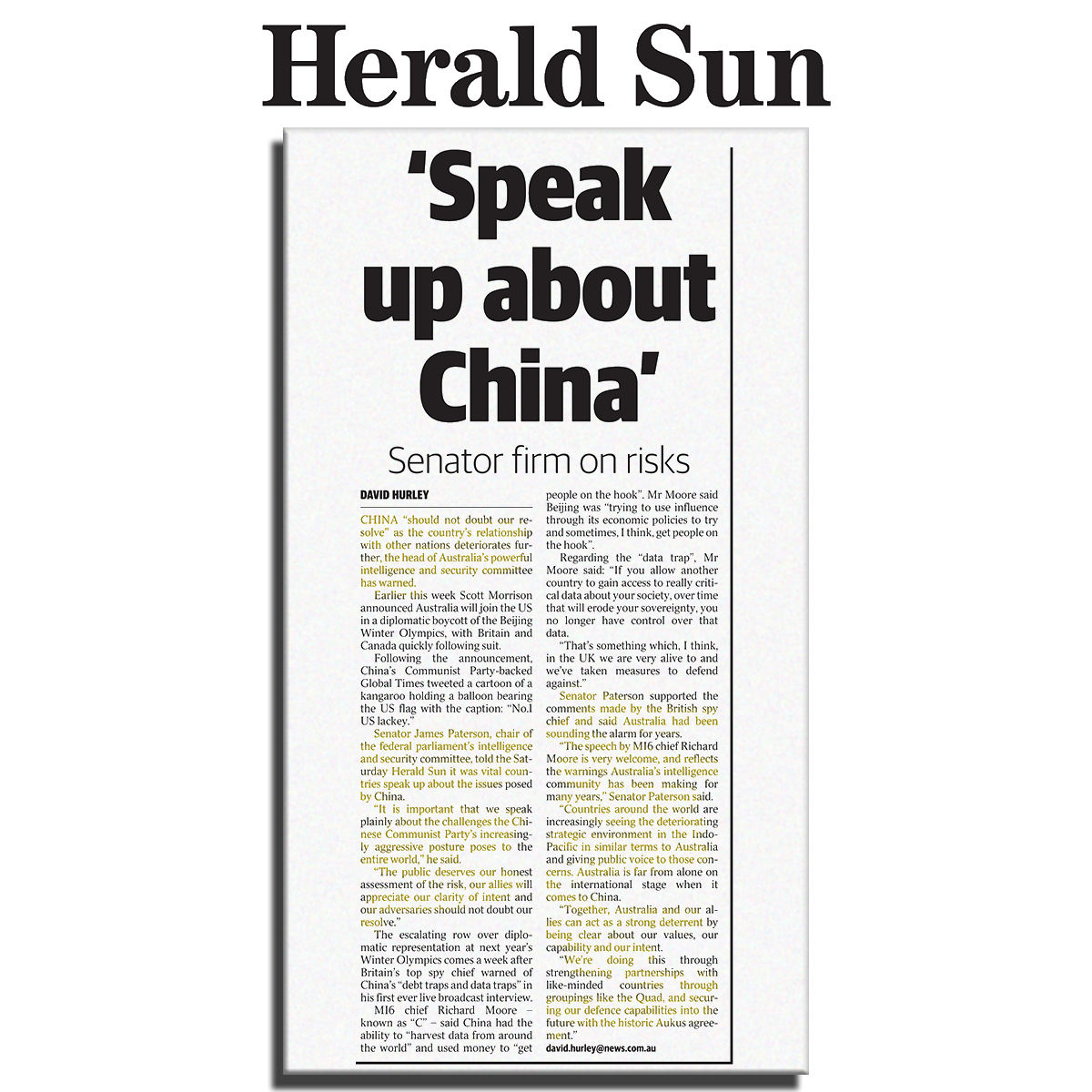 China “should not doubt our resolve” as the country’s relationship with other nations deteriorates further, the head of Australia’s powerful intelligence and security committee has warned.

Earlier this week Prime Minister Scott Morrison announced Australia will join the US in a diplomatic boycott of the Beijing Winter Olympics, with the UK and Canada quickly joining the boycott.

Following the announcement, China’s communist party-backed media outlet the Global Times tweeted a cartoon of a kangaroo holding a balloon bearing the US flag with the caption: “No.1 US lackey.”

Senator James Paterson, chair of the federal parliament’s intelligence and security committee, said it was vital countries speak up about the issues posed by China.

“It is important that we speak plainly about the challenges the Chinese Communist Party’s increasingly aggressive posture poses to the entire world,” he said.

“The public deserves our honest assessment of the risk, our allies will appreciate our clarity of intent and our adversaries should not doubt our resolve.”

The escalating row over diplomatic representation at next year’s Winter Olympics comes a week after the UK’s top spy chief warned of China’s “debt traps and data traps” in his first ever live broadcast interview.

MI6 chief Richard Moore – known as “C” – said China has the ability to “harvest data from around the world” and uses money to “get people on the hook”.

Mr Moore said Beijing is “trying to use influence through its economic policies to try and sometimes, I think, get people on the hook”.

Regarding the “data trap”, Mr Moore said: “If you allow another country to gain access to really critical data about your society, over time that will erode your sovereignty, you no longer have control over that data.

“That’s something which, I think, in the UK we are very alive to and we’ve taken measures to defend against.”

Mr Paterson supported the comments made by the UK spy chief and said Australia had been sounding the alarm for years.

“The speech by MI6 chief Richard Moore is very welcome, and reflects the warnings Australia’s intelligence community has been making for many years,” Mr Paterson said.

“Countries around the world are increasingly seeing the deteriorating strategic environment in the Indo-Pacific in similar terms to Australia and giving public voice to those concerns. “Australia is far from alone on the international stage when it comes to China.

“Together, Australia and our allies can act as a strong deterrent by being clear about our values, our capability and our intent.

“We’re doing this through strengthening partnerships with like-minded countries through groupings like the QUAD and securing our defence capabilities into the future with the historic AUKUS agreement.”