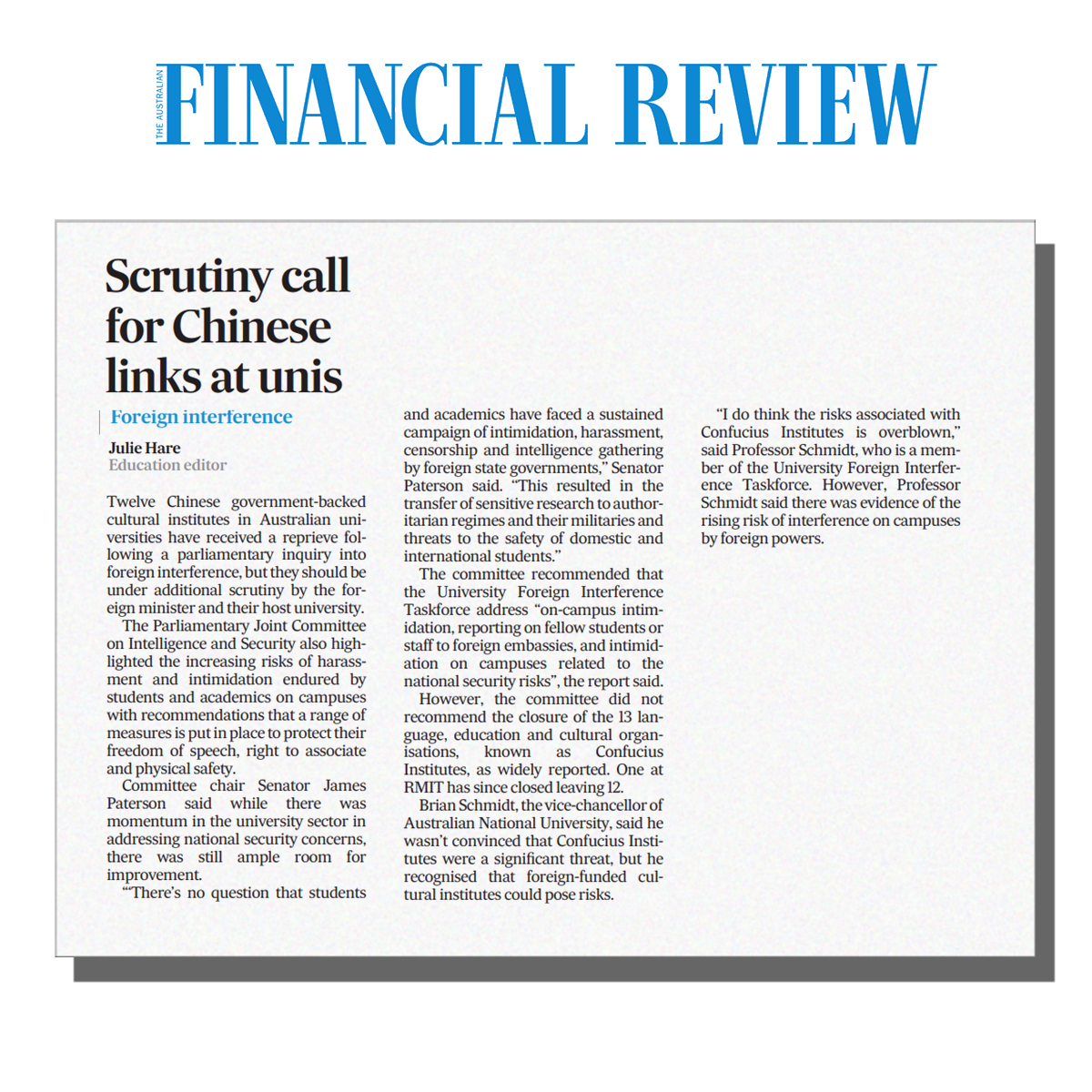 Twelve Chinese-government backed cultural institutes in Australian universities have received a reprieve following a parliamentary inquiry into foreign interference, but they should be put under additional scrutiny by the foreign minister and their host university.

The Parliamentary Joint Committee on Intelligence and Security also highlighted the increasing risks of harassment and intimidation endured by students and academics on campuses with recommendations that a range of measures is put in place to protect their freedom of speech, right to associate and physical safety.

Committee chair Senator James Paterson said there was momentum in the university sector in addressing national security concerns, there was still ample room for improvement.

“‘There’s no question that students and academics have faced a sustained campaign of intimidation, harassment, censorship and intelligence gathering by foreign state governments,” Senator Paterson said.

“This resulted in the transfer of sensitive research to authoritarian regimes and their militaries and threats to the safety of domestic and international students.”

The committee recommended that the University Foreign Interference Taskforce address “on-campus intimidation, reporting on fellow students or staff to foreign embassies, and intimidation on campuses related to the national security risks”, the report said.

However, the committee did not go as far as to recommend the closure of the 13 language, education and cultural organisations, known as Confucius Institutes, as widely reported last year. One at RMIT closed at the end of 2021, leaving 12.

Brian Schmidt, the vice-chancellor of Australian National University, said he wasn’t convinced that Confucius Institutes were a significant threat, but he recognised that foreign-funded cultural institutes could pose risks.

“I do think the risks associated with Confucius Institutes is overblown,” said Professor Schmidt, who is a member of the University Foreign Interference Taskforce.

However, Professor Schmidt said there was evidence of the rising risk of interference on campuses by foreign powers.

“The reality is that it is not just one country but many countries, most authoritarian states with cyber surveillance,” Professor Schmidt said.

“There are very real challenges for our students to speak out and use their full freedoms here in Australia, including consequences for them and their families when they go back home. As I said, that is many countries, not just one.”

Professor Schmidt said in the past five years or so almost all universities had become more alert and vigilant to the risks of foreign interference and had put in better processes to ensure that did not happen.

A massive cyber incursion at ANU in 2018 had “opened my eyes”, he said, adding that as a result his university had been ahead of the pack.

A $10 million contract between Monash University and COMAC – a Chinese government-owned aviation company that was blacklisted by the US government – came in for special mention.

The company is understood to use a lot of western research and technologies in developing new aircraft and would be considered a risk on theft of intellectual property.

The report said ASIO should provide information on threats to the Australian university sector “as a routine part of their broader threat assessment”.

It also said the Australian Research Council should be subject to an audit of grants made over the past decade to examine the any exposure to possible interference from researchers from other countries. Penalties for grant fraud under the ARC’s various grants programs should also be investigated to ensure they were adequate, the report said.