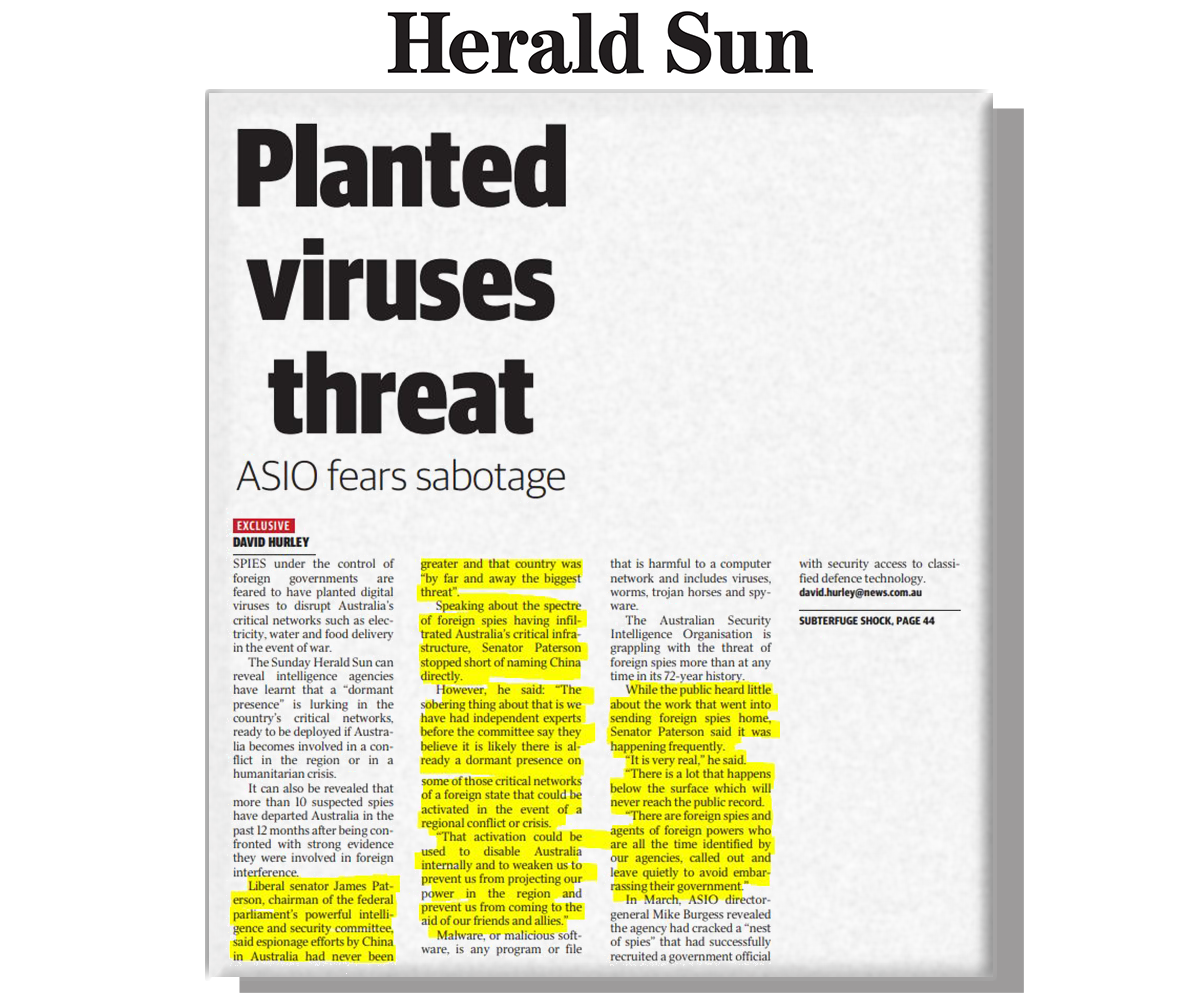 Foreign spies under the control of overseas governments are feared to have planted digital viruses to disrupt Australia’s critical networks such as electricity, water and food delivery in the event of the country going to war.

The Sunday Herald Sun can reveal intelligence agencies have learned that a “dormant presence” is believed to be lurking in the country’s critical networks, ready to be deployed if Australia becomes involved in a conflict in the region or in a humanitarian crisis.

It can also be revealed that more than 10 suspected spies have left Australia in the past 12 months after being confronted with strong evidence they were involved in foreign interference.

In an exclusive interview with the Sunday Herald Sun, Liberal senator James Paterson, chair of the federal parliament’s powerful intelligence and security committee, said espionage efforts by China in Australia had never been higher and the country is “by far and away the biggest threat”.

Speaking about the spectre of foreign spies having infiltrated Australia’s critical infrastructure, Senator Paterson did not name China directly, but said: “The sobering thing about that is we have had independent experts before the committee say they believe it is likely there is already a dormant presence on some of those critical networks of a foreign state that could be activated in the event of a regional conflict or crisis.

“And that activation could be used to disable Australia internally and to weaken us to prevent us from projecting our power in the region and prevent us from coming to the aid of our friends and allies.”

Malware, or malicious software, is any program or file that is harmful to a computer network and includes viruses, worms, trojan horses and spyware.

The Australian Security Intelligence Organisation (ASIO) is grappling with the threat of foreign spies more than at any time in its 72-year history.

While the public hear little about the work that goes into sending foreign spies home, Senator Paterson said it is happening frequently.

“There is a lot that happens below the surface which will never reach the public record. There are foreign spies and agents of foreign powers who are all the time identified by ASIO and other agencies and called out and leave quietly to avoid embarrassment to their government.”

In March ASIO director-general Mike Burgess revealed the agency had cracked a “nest of spies” that successfully recruited a government official with security access to classified defence technology.

The spies also groomed politicians and tried to get access to sensitive security protocols for a major airport.