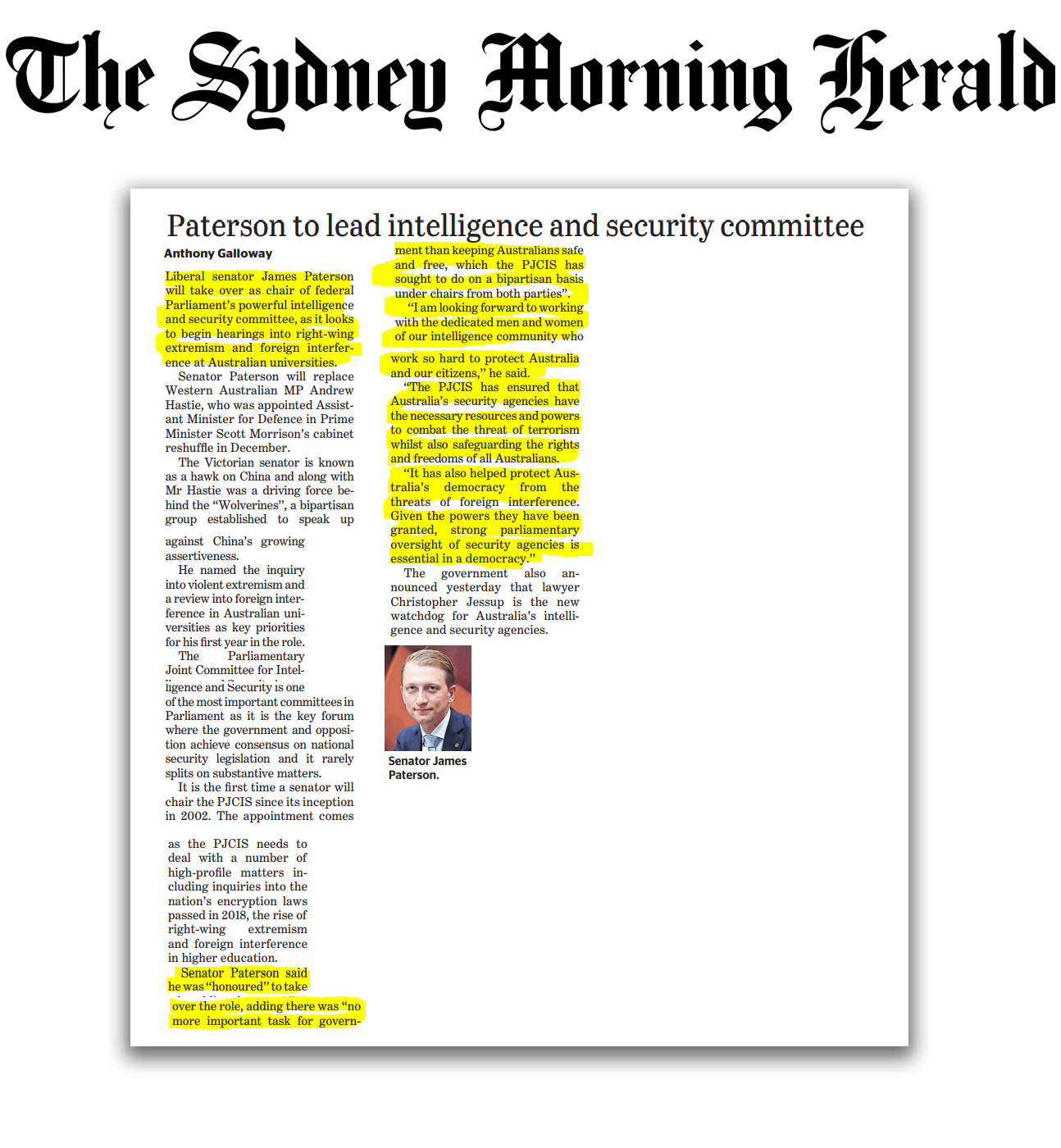 Liberal senator James Paterson will take over as chair of Federal Parliament’s powerful intelligence and security committee as it looks to begin hearings into right-wing extremism and foreign interference at Australian universities.Senator Paterson will replace Western Australian MP Andrew Hastie, who was appointed Assistant Minister for Defence in Prime Minister Scott Morrison’s cabinet reshuffle in December.The Victorian senator is known as a hawk on China and along with Mr Hastie was a driving force behind the “Wolverines”, a bipartisan group established to speak up against China’s growing assertiveness.He named the inquiry into violent extremism and a review into foreign ­interference in Australian universities as key priorities for his first year in the role.

The Parliamentary Joint Committee for Intelligence and Security is seen as one of the most important committees in Parliament as it is the key forum whereby the government and opposition achieve consensus on national security legislation, and it rarely splits on substantive matters.It is the first time a senator will chair the PJCIS since its inception in 2002.The appointment comes as the PJCIS needs to deal with a number of high-profile matters including inquiries into the nation’s encryption laws passed in 2018, the rise of right-wing extremism and foreign interference in higher education.Senator Paterson said he was “honoured” to take over the role, adding there was “no more important task for government than keeping Australians safe and free, which the PJCIS has sought to do on a bipartisan basis under chairs from both parties”.“I am looking forward to working with the dedicated men and women of our intelligence community who work so hard to protect Australia and our citizens,” he said.

“The PJCIS has ensured that Australia’s security agencies have the necessary resources and powers to combat the threat of terrorism whilst also safeguarding the rights and freedoms of all Australians.“It has also helped protect Australia’s democracy from the threats of foreign interference.Given the powers they have been granted, strong parliamentary oversight of security agencies is essential in a democracy.”Senator Paterson said in addition to the “vital legislation” the committee will consider this year, “the inquiries into extremist movements and radicalism, and national security in higher education will be particularly important”.

“We must ensure that violent extremism does not take hold in Australia and that our universities have robust policies in place to protect their researchers and students from foreign coercion and influence,” he said.The government also announced on Thursday it had appointed Australian lawyer Christopher Jessup as the new watchdog for Australia’s intelligence and security agencies.Mr Jessup, who had been acting in the role of Inspector‑General of Intelligence and Security in recent weeks, will begin his five-year term from next week.