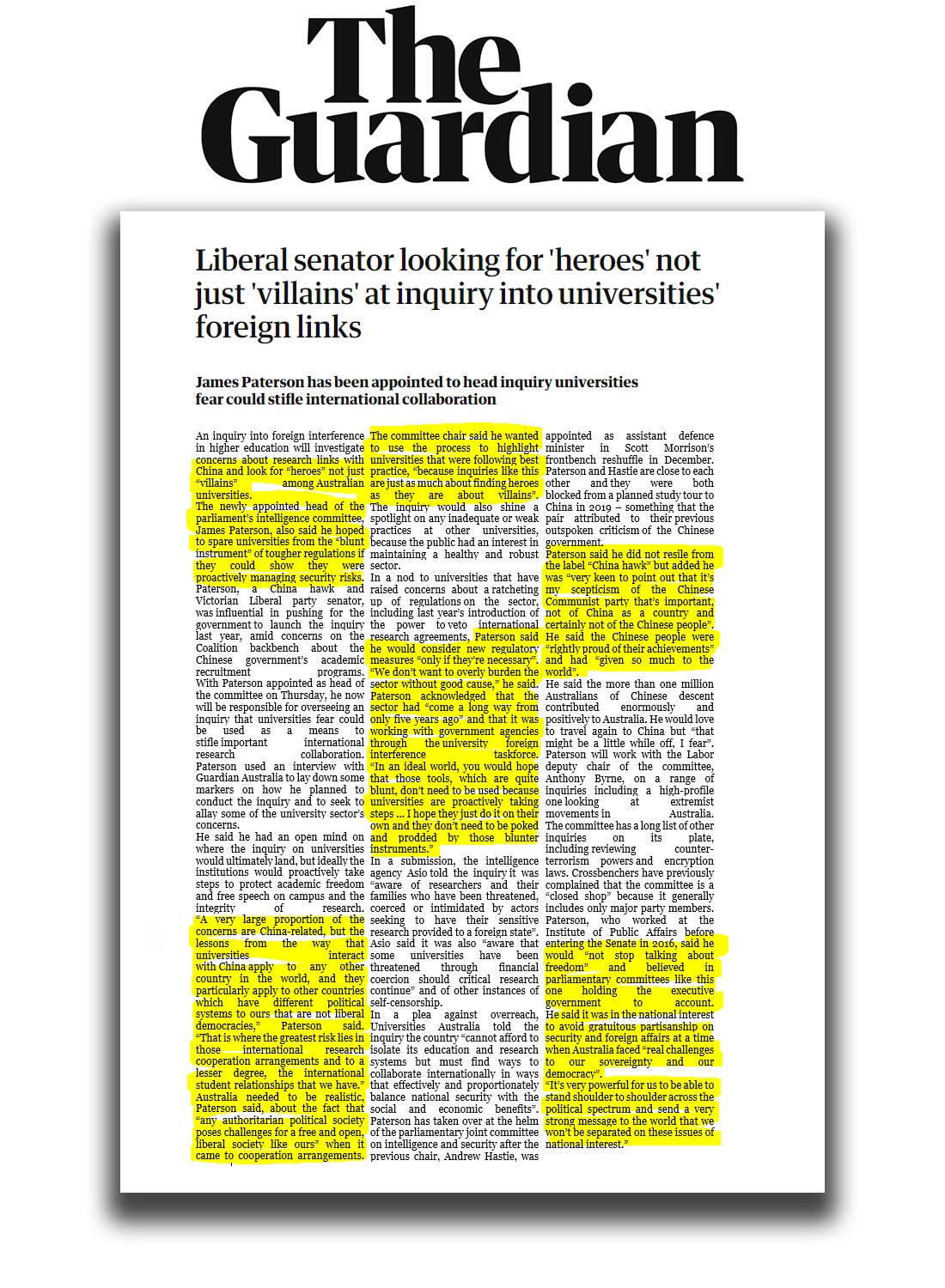 An inquiry into foreign interference in higher education will investigate concerns about research links with China and look for “heroes” not just “villains” among Australian universities.

The newly appointed head of the parliament’s intelligence committee, James Paterson, also said he hoped to spare universities from the “blunt instrument” of tougher regulations if they could show they were proactively managing security risks.

Paterson, a China hawk and Victorian Liberal party senator, was influential in pushing for the government to launch the inquiry last year, amid concerns on the Coalition backbench about the Chinese government’s academic recruitment programs.

With Paterson appointed as head of the committee on Thursday, he now will be responsible for overseeing an inquiry that universities fear could be used as a means to stifle important international research collaboration.

Paterson used an interview with Guardian Australia to lay down some markers on how he planned to conduct the inquiry and to seek to allay some of the university sector’s concerns.

He said he had an open mind on where the inquiry on universities would ultimately land, but ideally the institutions would proactively take steps to protect academic freedom and free speech on campus and the integrity of research.

“A very large proportion of the concerns are China-related, but the lessons from the way that universities interact with China apply to any other country in the world, and they particularly apply to other countries which have different political systems to ours that are not liberal democracies,” Paterson said.

“That is where the greatest risk lies in those international research cooperation arrangements and to a lesser degree, the international student relationships that we have.”

Australia needed to be realistic, Paterson said, about the fact that “any authoritarian political society poses challenges for a free and open, liberal society like ours” when it came to cooperation arrangements.

The committee chair said he wanted to use the process to highlight universities that were following best practice, “because inquiries like this are just as much about finding heroes as they are about villains”.

The inquiry would also shine a spotlight on any inadequate or weak practices at other universities, because the public had an interest in maintaining a healthy and robust sector.

In a nod to universities that have raised concerns about a ratcheting up of regulations on the sector, including last year’s introduction of the power to veto international research agreements, Paterson said he would consider new regulatory measures “only if they’re necessary”.

“We don’t want to overly burden the sector without good cause,” he said.

Paterson acknowledged that the sector had “come a long way from only five years ago” and that it was working with government agencies through the university foreign interference taskforce.

“In an ideal world, you would hope that those tools, which are quite blunt, don’t need to be used because universities are proactively taking steps … I hope they just do it on their own and they don’t need to be poked and prodded by those blunter instruments.”

In a submission, the intelligence agency Asio told the inquiry it was “aware of researchers and their families who have been threatened, coerced or intimidated by actors seeking to have their sensitive research provided to a foreign state”.

Asio said it was also “aware that some universities have been threatened through financial coercion should critical research continue” and of other instances of self-censorship.

In a plea against overreach, Universities Australia told the inquiry the country “cannot afford to isolate its education and research systems but must find ways to collaborate internationally in ways that effectively and proportionately balance national security with the social and economic benefits”.

Paterson has taken over at the helm of the parliamentary joint committee on intelligence and security after the previous chair, Andrew Hastie, was appointed as assistant defence minister in Scott Morrison’s frontbench reshuffle in December.

Paterson and Hastie are close to each other and they were both blocked from a planned study tour to China in 2019 – something that the pair attributed to their previous outspoken criticism of the Chinese government.

Paterson said he did not resile from the label “China hawk” but added he was “very keen to point out that it’s my scepticism of the Chinese Communist party that’s important, not of China as a country and certainly not of the Chinese people”.

He said the Chinese people were “rightly proud of their achievements” and had “given so much to the world”.

He said the more than one million Australians of Chinese descent contributed enormously and positively to Australia. He would love to travel again to China but “that might be a little while off, I fear”.

Paterson will work with the Labor deputy chair of the committee, Anthony Byrne, on a range of inquiries including a high-profile one looking at extremist movements in Australia.

The committee has a long list of other inquiries on its plate, including reviewing counter-terrorism powers and encryption laws. Crossbenchers have previously complained that the committee is a “closed shop” because it generally includes only major party members.

Paterson, who worked at the Institute of Public Affairs before entering the Senate in 2016, said he would “not stop talking about freedom” and believed in parliamentary committees like this one holding the executive government to account.

He said it was in the national interest to avoid gratuitous partisanship on security and foreign affairs at a time when Australia faced “real challenges to our sovereignty and our democracy”.

“It’s very powerful for us to be able to stand shoulder to shoulder across the political spectrum and send a very strong message to the world that we won’t be separated on these issues of national interest.”