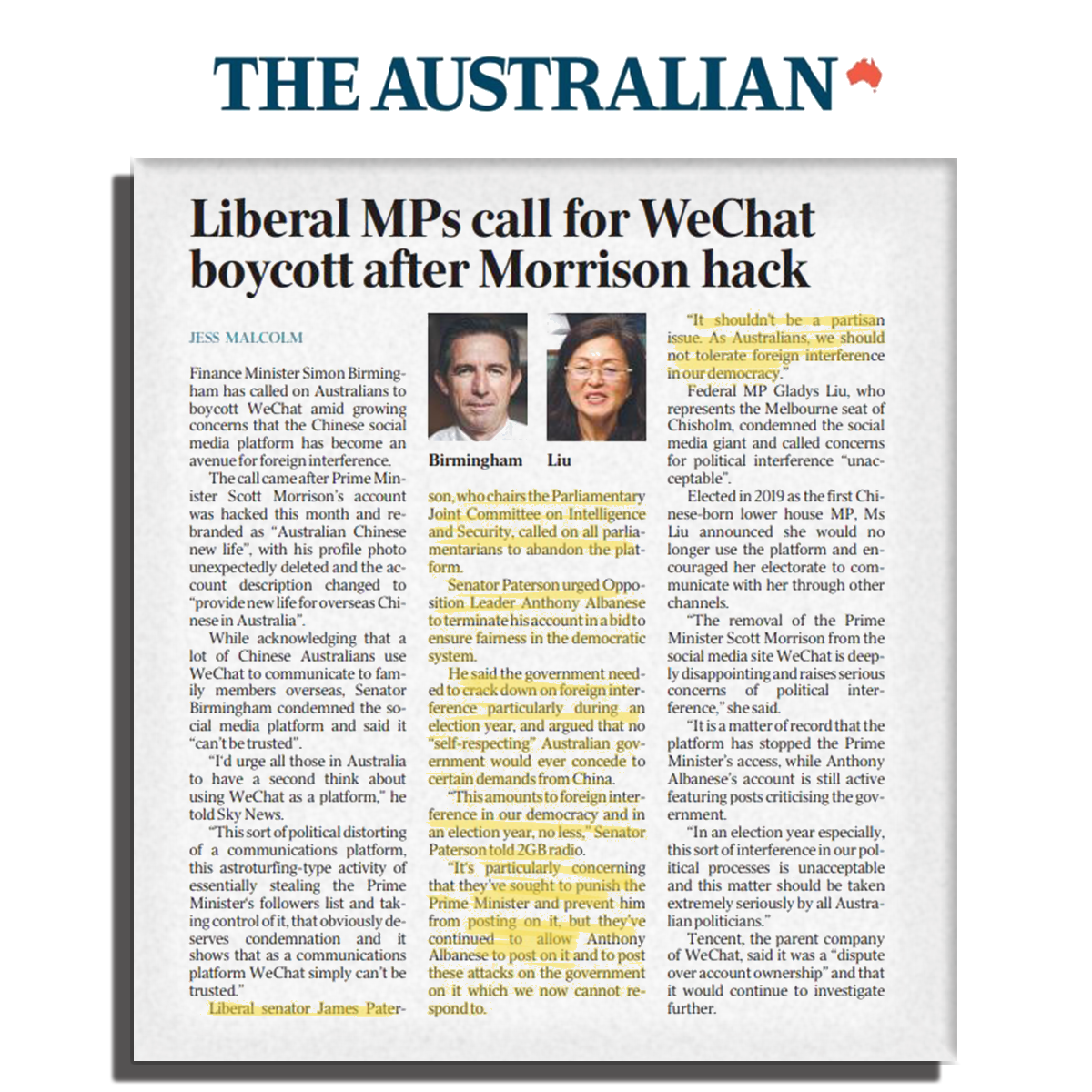 Finance Minister Simon Birmingham has called on Australians to boycott WeChat amid growing concerns that the Chinese social media platform has become an avenue for foreign interference.

The call came after Prime Minister Scott Morrison’s account was hacked this month and rebranded as “Australian Chinese new life”, with his profile photo unexpectedly deleted and the account description changed to “provide new life for overseas Chinese in Australia”.

While acknowledging that a lot of Chinese Australians use WeChat to communicate to family members overseas, Senator Birmingham condemned the social media platform and said it “can’t be trusted”.

“I‘d urge all those in Australia to have a second think about using WeChat as a platform,” he told Sky News.

Liberal senator James Paterson, who chairs the Parliamentary Joint Committee on Intelligence and Security, called on all parliamentarians to abandon the platform.

Senator Paterson urged Opposition Leader Anthony Albanese to terminate his account in a bid to ensure fairness in the democratic system.

He said the government needed to crack down on foreign interference particularly during an election year, and argued that no “self-respecting” Australian government would ever concede to certain demands from China.

“This amounts to foreign interference in our democracy and in an election year, no less,” Senator Paterson told 2GB radio.

“It‘s particularly concerning that they’ve sought to punish the Prime Minister and prevent him from posting on it, but they’ve ­continued to allow Anthony ­Albanese to post on it and to post these attacks on the government on it which we now cannot respond to.

“It shouldn't be a partisan issue. As Australians, we should not tolerate foreign interference in our democracy.”

Elected in 2019 as the first Chinese-born lower house MP, Ms Liu announced she would no longer use the platform and encouraged her electorate to communicate with her through other channels.

“The removal of the Prime Minister Scott Morrison from the social media site WeChat is deeply disappointing and raises serious concerns of political interference,” she said.

“It is a matter of record that the platform has stopped the Prime Minister’s access, while Anthony Albanese’s account is still active featuring posts criticising the government.

“In an election year especially, this sort of interference in our political processes is unacceptable and this matter should be taken extremely seriously by all Australian politicians.”

Tencent, the parent company of WeChat, said it was a “dispute over account ownership” and that it would continue to investigate further.