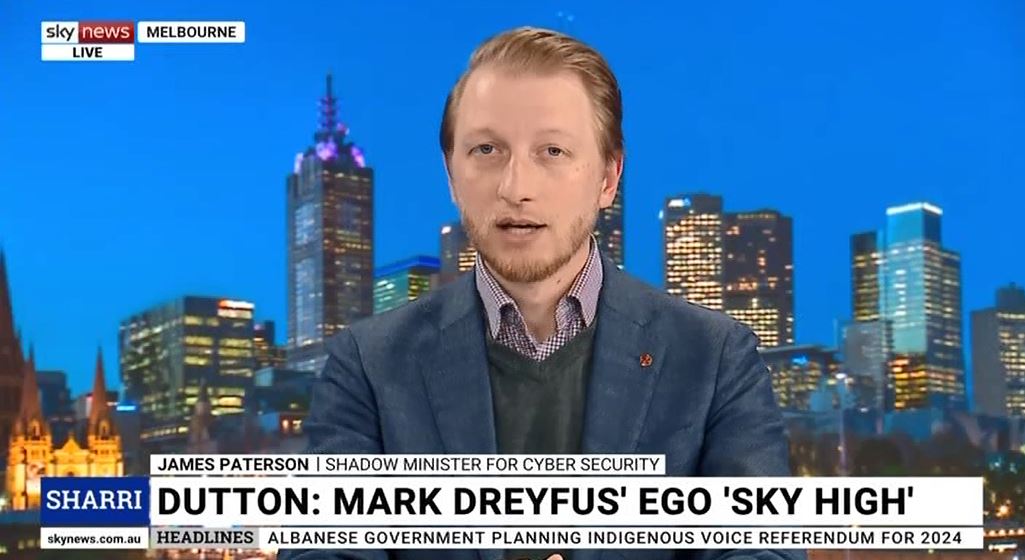 SHARRI MARKSON: Joining me to discuss this, the new Shadow Minister for Cyber Security and Countering Foreign Interference, James Paterson. James, thank you for your time. Congratulations on your entry to the shadow frontbench. What do you think of this decision? One of the first decisions by the new Labor Government to break up Home Affairs.

JAMES PATERSON: Sharri, thanks very much for having me.I thought your editorial set out the issues very well. I'm very concerned about this on a couple of levels. One is the and the big question is this how will this make Australians and Australia safer? Well, the Labor Party hasn't even bothered to explain why. They didn't say why before the election, because they didn't bring the Australian people into their confidence and tell them they were going to do this before the election. And since they've made these changes that provided no public justification of it. My fear is it will, in fact, it won't make Australians safer. It'll make us less safe. The Home Affairs Department was a very innovative reform by the then Turnbull government. It was the right thing to do to bring all those arms of our national security agencies together under one roof and under one minister, so they could work together in a seamless way. And it has prevented mass casualty terrorist attacks. It has successfully tackled foreign interference and espionage. It has protected us in the cyber realm. And all of that is being dismantled and undermined. And let's be really clear about this, Sharri, they've effectively abolished the Department of Home Affairs. It is really the Department of Home Affairs in name only. It's the Department of Immigration and ASIO. It is not the Department of Home Affairs as it was, and that's a dishonest attempt to mislead the Australian people.

MARKSON: James, you mentioned there that it has dismantled or stopped some terror incidents and other attacks from affecting Australians. Are there some that we don't know about that have been foiled at an earlier stage because Home Affairs was operating so successfully and bits of information from different agencies were able to be put together and a full picture of the situation became known very quickly to the one, you know,department head or minister in charge.

PATERSON: Sharri, my observation from chairing the Intelligence and Security Committee, which had oversight of these agencies in a parliamentary sense, is that they were working together more effectively than ever before. They were really well joined up when it came to countering foreign interference and also countering terrorism and all the gamut of national security challenges we faced. I mean, they successfully stopped and kept the boats and kept our borders secure. And all of that is put at risk now. All of that could be undermined by this really bizarre decision, which I think is driven by power. It's clearly a grab for power by Mark Dreyfus as Attorney-General, but also ideology. Mark Dreyfus never liked the Department of Home Affairs. He always railed against it and I think he's taken the opportunity on the day in which he was sworn in to steal agencies out from anew and relatively inexperienced Minister in Clare O'Neil and effectively gut her portfolio. And Anthony Albanese has signed off on that and he shouldn't have. He really should have said stop, no. Do we want to be dismantling a key barrier to threats to this country and its way of life?

MARKSON: And that's the thing. We don't know whether he took advantage of Clare O'Neil being new to this space or whether Labor would have gone ahead with this even under Kristina Keneally. But, you know, I think a key point is that voters weren't told about this change during the election campaign if it was planned. Do you think that is a deception?

PATERSON: Unquestionably, I think it is, Sharri. And perhaps it's because Mark Dreyfus wasn't able to get Kristina Keneally to agree to having her portfolio gutted while she was still the shadow minister. But with her loss of the seat of Fowler, as you pointed out, there was a vacuum and he stepped into that vacuum and grabbed all the power he could. And I think it is very illustrative that on the day he was sworn in, on the day the new ministers were sworn in, that these changes were made. I mean, that is a very swift change. It's a very significant change. And as you say, it wasn't told to the Australian people before the election and it still has not been explained now and there really is a very heavy burden. How will this make Australians safer and why won't this put at risk the exceptional cooperation that we've seen between our agencies? I'm very concerned.

MARKSON: Turning to the announcement by Defence today that an RAAF maritime surveillance aircraft was intercepted by a Chinese fighter jet over the South China Sea. This was on May 26, but just announced today. This has been described as a very dangerous interaction. Jim Molan was on Sky with Chris Smith earlier. He said this could have been a collision, it could have cost Australian lives. What has happened here?

PATERSON: Sharri, there's no question it's an act of provocation, an act of intimidation and I would go as far as saying an act of aggression. I understand from the Defence Department and the Defence Minister’s public descriptions today that it involved the Chinese fighter jet going in front of our P-8 Poseidon in a very dangerous way and also releasing chaff in front of the P-8 Poseidon. Chaff is a countermeasure which military aircraft use to try and evade a, for example, a radar equipped weapon. And chaff contains things like aluminium and other hard substances, and I understand that was ingested by the engine of our RAAF operating in the area.There's no question this put at risk the lives of Australia's Air Force personnel. It could have ended with our plane being downed from the skies and their lives being put at grave risk. So it's an incredibly irresponsible and provocative act by the Chinese government. On a note of bipartisanship, Sharri, I want to congratulate the government on being up front with the public about this. I think it's very important when these sort of acts happen that the public is kept informed by them that the full facts are shared with them,because it does show just what a belligerent government the Chinese Communist Party has become and the very serious threats that they pose to our national security. We were well within our rights to be operating in that area. We have for many years, and this was a very serious act of aggression.

MARKSON: Well, you know, you call it an act of aggression. So, what is Beijing's intention? Why did it do this?

PATERSON: Well, I think it is illustrative that occurred only five days after our federal election. And I suspect it was designed to send a very clear message to the new government and to try and intimidate them and to try and tell them that they shouldn't continue to operate as our government did, those sorts of flights in the region over the South China Sea, which is an international waterway through which the majority of Australia's international trade passes, and we are well within our legal rights to be in the area. So, it's very important how the government responds.They must demonstrate that they have not been intimidated by this. They must continue to operate in the area consistent with international law, as we have been for many years. And they must be very strong in taking this issue up with the Chinese government because it is very dangerous, very retrograde behaviour and it is an escalation of the behaviour we saw earlier this year when a Chinese naval vessel again used, targeted a P-8 Poseidon operating in our waters, our territorial waters and shined a targeting laser at them. I mean,this is even more serious than that incident, which was already serious enough.

MARKSON: You've been given a new portfolio today,as I mentioned a moment ago, as Shadow Minister for Cyber Security and also Countering Foreign Interference. What are you going to be targeting? What do you think the biggest concerns are in this space? What will you be pushing the new Labor government on?

PATERSON: Sharri, cyber security threats and foreign interference are two of the most potent threats to our national security, but also to our sovereignty as a liberal democracy. And it's critically important that they are effectively countered. And the Liberal and National parties in government have a very good record on this. We passed world leading legislation to address these issues. We funded our agencies to record amounts to ensure they were able to combat them and gave them the powers that they needed to take it on. So, what are we watching very closely from Labor is whether or not they maintain those strong policies that we put in place and whether they're able to effectively build on them because there are a lot of exciting opportunities for Australia in this. The AUKUS agreement is the most important part of that, where cooperation in cyber security and enhanced cyberwarfare capabilities are a key part of it, as is artificial intelligence and machine learning, which are going to be game changing capabilities. So, I really want to make sure the Labor Party takes advantage of that and doesn't take any backward steps in this area because we just can't afford it. It would be an enormous threat to our sovereignty and security.

MARKSON: Yeah, when particularly in the case of counting foreign interference, we know that the ASIO boss has said this is now a bigger issue in Australia than terrorism, which is quite extraordinary. So, I'm sure you're going to have a lot of work cut out for you. Thank you very much for your time.