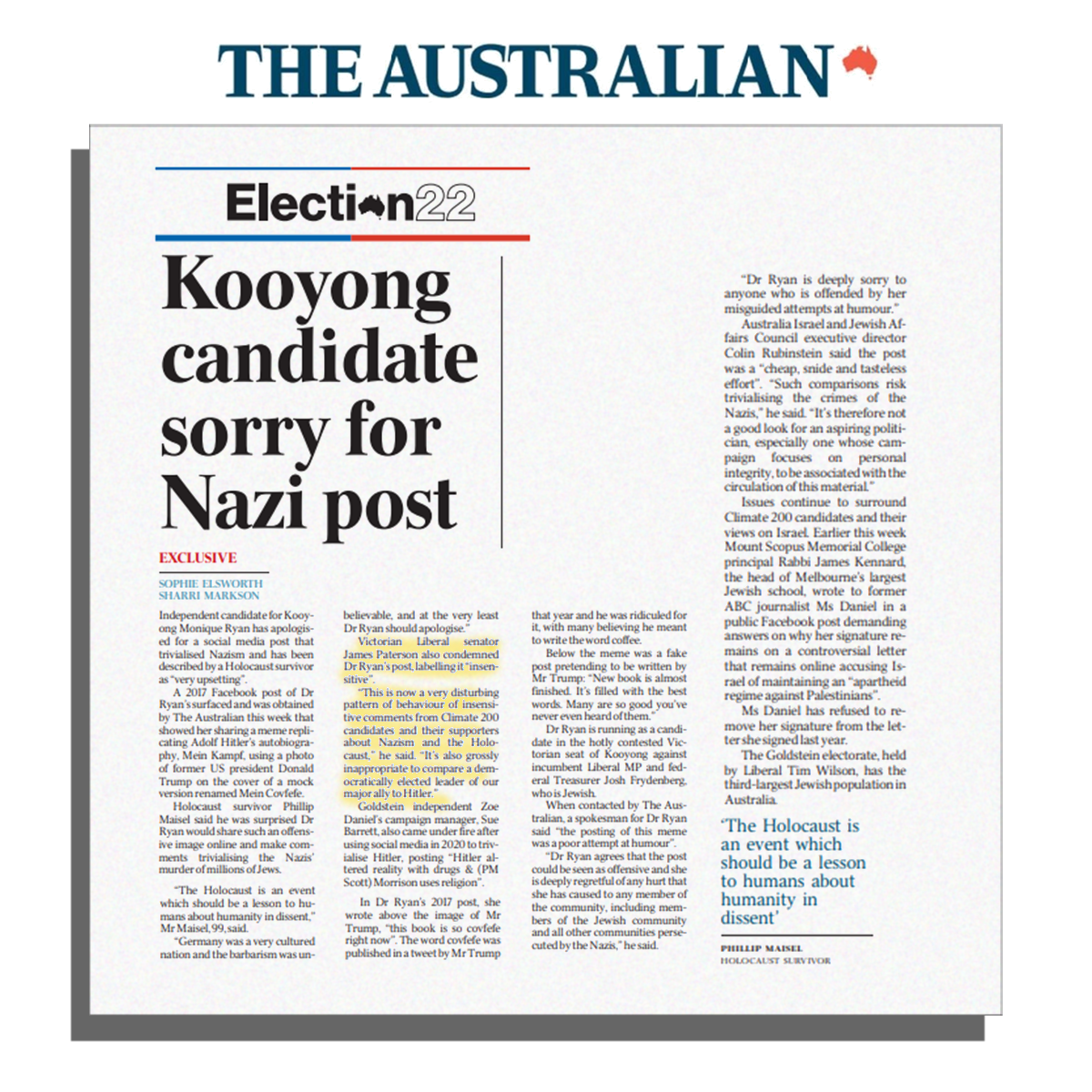 Independent candidate for Kooyong Monique Ryan has apologised for a social media post that trivialised Nazism and has been described by a Holocaust survivor as “very upsetting”.

A 2017 Facebook post of Dr Ryan’s surfaced and was obtained by The Australian this week that showed her sharing a meme replicating Adolf Hitler’s autobiography, Mein Kampf, using a photo of former US president Donald Trump on the cover of a mock version renamed Mein Covfefe.

Holocaust survivor Phillip Maisel said he was surprised Dr Ryan would share such an offensive image online and make comments trivialising the Nazis’ murder of millions of Jews.

“The Holocaust is an event which should be a lesson to humans about humanity in dissent,” Mr Maisel, 99, said.

“Germany was a very cultured nation and the barbarism was unbelievable, and at the very least Dr Ryan should apologise.”

“This is now a very disturbing pattern of behaviour of insensitive comments from Climate 200 candidates and their supporters about Nazism and the Holocaust,” he said. “It’s also grossly inappropriate to compare a democratically elected leader of our major ally to Hitler.”

In Dr Ryan’s 2017 post, she wrote above the image of Mr Trump, “this book is so covfefe right now”. The word covfefe was published in a tweet by Mr Trump that year and he was ridiculed for it, with many believing he meant to write the word coffee.

Below the meme was a fake post pretending to be written by Mr Trump: “New book is almost finished. It’s filled with the best words. Many are so good you’ve never even heard of them.”

Dr Ryan is running as a candidate in the hotly contested Victorian seat of Kooyong against incumbent Liberal MP and federal Treasurer Josh Frydenberg, who is Jewish.

When contacted by The Australian, a spokesman for Dr Ryan said “the posting of this meme was a poor attempt at humour”.

“Dr Ryan agrees that the post could be seen as offensive and she is deeply regretful of any hurt that she has caused to any member of the community, including members of the Jewish community and all other communities persecuted by the Nazis,” he said.

“Dr Ryan is deeply sorry to anyone who is offended by her misguided attempts at humour.”

Australia Israel and Jewish Affairs Council executive director Colin Rubinstein said the post was a “cheap, snide and tasteless effort”. “Such comparisons risk trivialising the crimes of the Nazis,” he said. “It’s therefore not a good look for an aspiring politician, especially one whose campaign focuses on personal integrity, to be associated with the circulation of this material.”

Ms Daniel has refused to remove her signature from the letter she signed last year.

The Goldstein electorate, held by Liberal Tim Wilson, has the third-largest Jewish population in Australia.