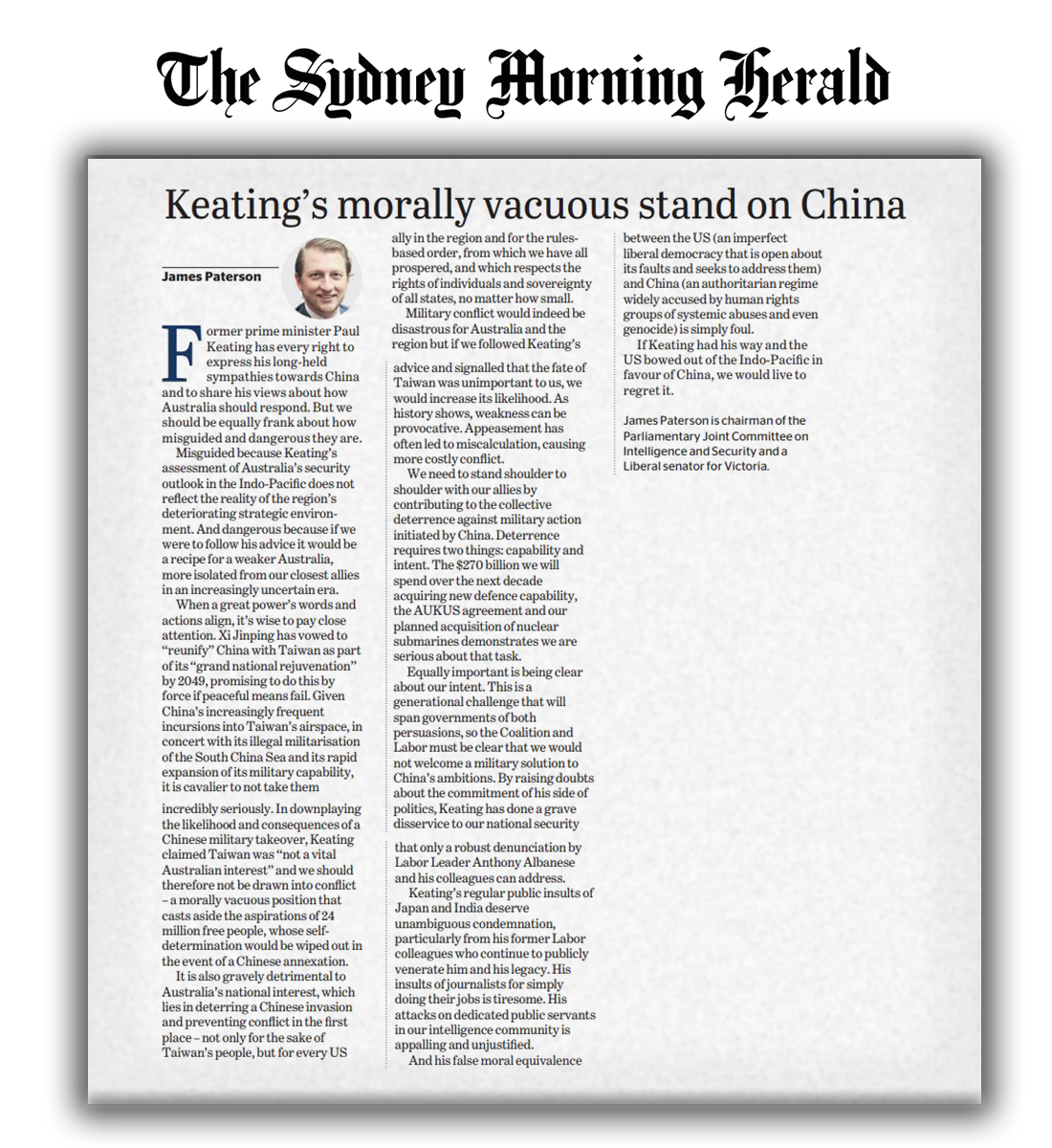 Former Prime Minister Paul Keating has every right to express his long-held sympathies towards China and to share his views about how Australia should respond. But we should be equally frank about how misguided and dangerous they are.

Misguided because Mr Keating’s assessment of Australia’s security outlook in the Indo-Pacific does not reflect the reality of the deteriorating strategic environment of the region.

And dangerous because if we were to follow Mr Keating’s advice it would be a recipe for a weaker Australia that is more isolated from our closest allies in an increasingly uncertain era.

When a great power’s words and actions align, its wise to pay close attention to them.

Xi Jinping has vowed to “reunify” China with Taiwan as part of its “grand national rejuvenation” by 2049, promising to do this by force if peaceful means fail. Given China’s increasingly frequent incursions into Taiwan’s airspace, in concert with its illegal militarisation of the South China Sea and its rapid expansion of its military capability, it is cavalier and irresponsible to not take them incredibly seriously.

In downplaying the likelihood and consequences of a Chinese military takeover of Taiwan, Mr Keating claimed Taiwan was “not a vital Australian interest” and that Australia should therefore not be drawn into military conflict over Taiwan.

This is a morally vacuous position which casts aside the aspirations and desires of 24 million free people, whose self-determination would be wiped out in the event of a Chinese annexation of the island.

It is also gravely detrimental to Australia’s national interest which lies in deterring a Chinese invasion and preventing conflict from being initiated in the first place – not just for the sake of the people of Taiwan, but every US ally in the region and the rules-based order which we have all prospered from in the post-war era.

Military conflict would indeed be disastrous for Australia and the region, but if we followed Mr Keating’s advice and signalled that the fate of Taiwan was unimportant to us we will increase the likelihood it occurs.

As history shows, weakness can be provocative. Appeasement has often led to miscalculation which causes far more serious and costly conflict.

Instead, we need to stand shoulder to shoulder with our allies by contributing to the collective deterrence against military action initiated by China.

Deterrence requires two things: capability and intent. The$270 billion we will spend over the next decade acquiring new defence capability, the AUKUS agreement and our planned acquisition of nuclear submarines demonstrates Australia is serious about contributing jointly with our allies in the region to that task.

Equally important is being clear about our intent. Because this is a generational challenge which will span governments of both persuasions, both the Coalition and Labor must be clear that we would not welcome a military solution to China’s cross-straits ambitions. By raising doubts about the commitment of his side of politics to that task, Mr Keating has done a grave disservice to our national security that only a clear and robust denunciation by Mr Albanese and his senior colleagues can address.

Mr Keating’s now regular public insults towards our closest regional partners Japan and India are disrespectful and deserve unambiguous condemnation, particularly from his former Labor colleagues who continue to so publicly venerate him and his legacy. His insults of journalists and the media for simply doing their jobs is tiresome and unwarranted. His attacks on the professional and dedicated public servants in our intelligence community is appalling and unjustified.

And his false moral equivalence between the United States –an imperfect liberal democracy but one which is open about its faults and seeks to address them, and China – an authoritarian regime widely accused by human rights groups of systemic human rights abuses and even genocide – is simply foul.

Our security and that of our partners in the region depends on an active and engaged United States who is uniquely capable of shouldering the immense burden of upholding an international order which respects the rights of individuals and sovereignty of all states, no matter how small. If Mr Keating had his way and the United States bowed out of the Indo-Pacific in favour of China we would live to regret it.

James Paterson is Chair of the Parliamentary Joint Committee on Intelligence and Security and a Liberal Senator for Victoria.