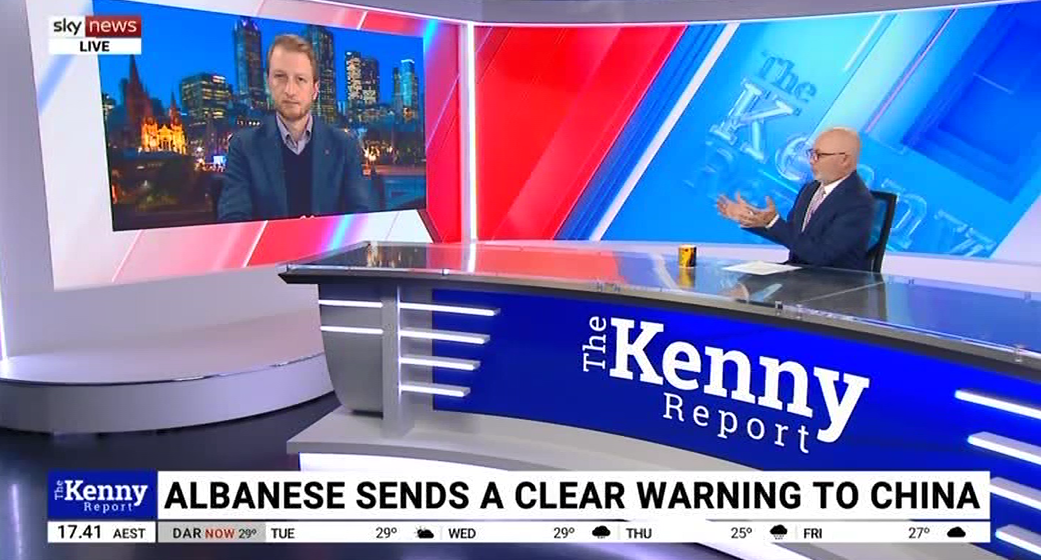 CHRIS KENNY: Now Prime Minister Anthony Albanese has joined 54 world leaders in Madrid for the largest NATO summit ever held. Russia's invasion of Ukraine will dominate the talks, as will China's threat to global security. Here's the PM speaking just after he landed last night.

EXCERPT OF PRIME MINISTER ANTHONY ALBANESE: China has been prepared to make sanctions not just against Australia, but to be more aggressive in its stance in the world. And it requires the world to move towards peace and security, but to do so in a way which says that we are prepared as democratic nations to ensure that when something happens like the invasion of Ukraine, the world is prepared to stand in solidarity.

KENNY: Let's bring in James Paterson, Liberal Senator for Victoria and Shadow Minister for Cyber Security. Thanks for joining us again, James. What message do you think China and Russia will get out of this NATO summit?

JAMES PATERSON: Evening, Chris. Look, I welcome the fact that the Prime Minister's been able to attend the summit. I think it is important that Australia be represented at the highest level because we are the largest non-NATO contributor to the war effort in Ukraine, something that our government, our previous government under Scott Morrison was very proud to have led. And so, I hope that China and Russia both take the same message out of it, which is that the free world is united in their opposition to the abrogation of the sovereignty and the self-determination of the people of Ukraine, that we are very determined to resist it and that we will do so not just in Europe, but in the Indo-Pacific as well.

KENNY: Yeah, that's the important thing. I think there's some continuity there in terms of foreign policy. But Anthony Albanese, take him at his word, he understands the importance of the Ukrainian conflict, not just in geostrategic terms, but in the way it, in what it says about standing up for sovereign nations and democratic independence.

KENNY: Now, Australia has done a lot in terms of diplomatic support, also in terms of humanity, humanitarian aid and military aid, especially with those Bushmasters. I just want to show you something else Anthony Albanese said before I ask you a couple of questions about that. And here is the Prime Minister talking about the possibility of visiting Ukraine on this trip.

EXCERPT OF THE PRIME MINISTER: Well, we'll continue to take security advice on that. Clearly, we have a security situation which is changing day by day. And this act of aggression, there have been further missiles into Kyiv as well, mean that the world just looks at what is going on there and collectively condemns it.

KENNY: Yeah. Those latest missiles into Kyiv might actually make it harder for the Prime Minister to visit. But the two questions out of this, I think, James, are should the Prime Minister go to Kyiv if he can? And secondly, if he turns up there, should he turn up with a greater military commitment?

PATERSON: Well, as I said, Chris, I welcome the fact that he's going to Madrid and I understand why he also wants to go to Paris. And he, of course, should follow security advice, whatever that may be, which I will not be privy to as a member of the opposition. But I think it would be a bit sad and it would be unfortunate if he's not able to take up President Zelensky's invitation to visit Kyiv. I think it would send a very strong and important message, and I think you're right. I think if he does go to Kyiv, it should be with further commitments of Australian support of additional materials, again consistent with the advice that the Defence Force will be providing him with what Australia can afford to provide and is in a position to provide. Of course, let's follow that security advice and if there is a very good reason why he can't go, we will accept that. But it would be a shame if he wasn't able to go there.

KENNY: Let's just go to the big picture here. How do we get this conflict ended? How does the rest of the world, especially when they won't enter the conflict directly? NATO's going to stay out of Ukraine. How do you force Russia back behind Ukraine's borders?

PATERSON: Well, we'll do it by the way in which we assisted the Ukrainians to do it in the first phase of the conflict. And that is by adequately arming and equipping them to repel the Russian invaders and enact the sufficiently high military cost on Russia, that makes them re-evaluate the course of action that they've taken. That's the only way you can get an invading army to change course and of course, continue to pile pressure on the economic front in the form of sanctions on the Russian regime and on the Russian government, because they must not be allowed to profit from this conflict. It's very important the steps that Europe has announced to wean themselves off Russian oil and gas, which is unfortunately facilitating and financing their war machine. And it's critically important that NATO has taken the steps it has to enforce and reinforce that front line within the Baltic states, in particular, to send a very clear and unambiguous message from NATO to Russia that any further incursions elsewhere into Europe will be met with severe force.

KENNY: Senator, thanks so much for joining us.