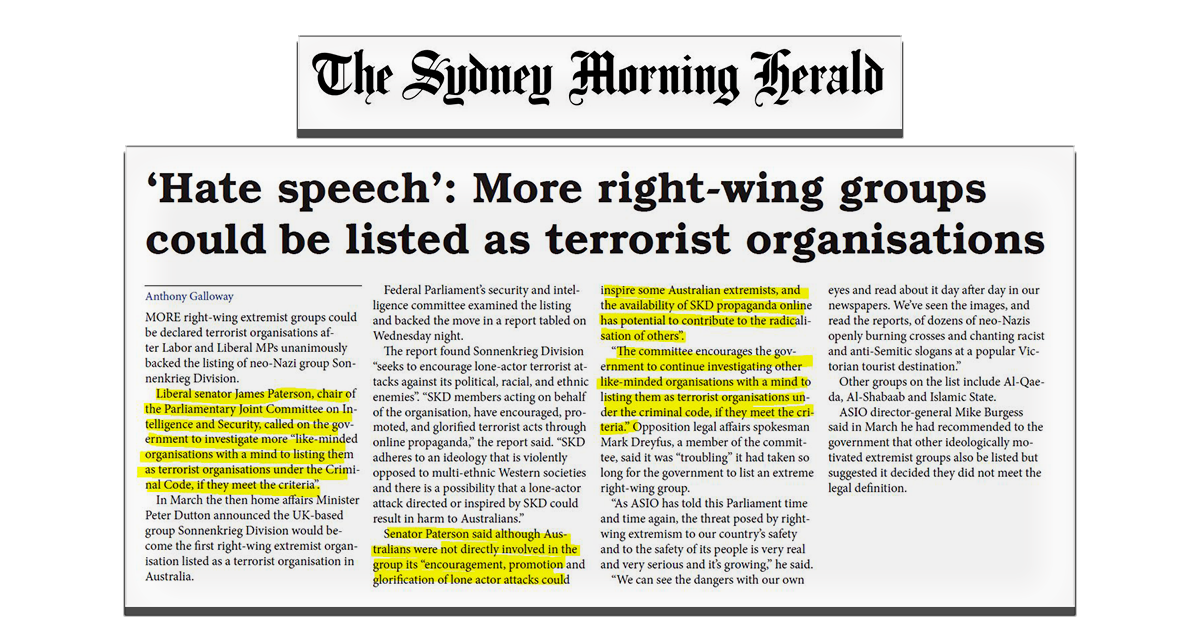 More right-wing extremist groups could be declared terrorist organisations after Labor and Liberal MPs unanimously backed the listing of neo-Nazi group Sonnenkrieg Division.Liberal senator James Paterson, chair of the Parliamentary Joint Committee on Intelligence and Security, called on the government to investigate more “like-minded organisations with a mind to listing them as terrorist organisations under the Criminal Code, if they meet the criteria”.

In March the then home affairs Minister Peter Dutton announced the UK-based group Sonnenkrieg Division would become the first right-wing extremist organisation listed as a terrorist organisation in Australia.Federal Parliament’s security and intelligence committee examined the listing and backed the move in a report tabled on Wednesday night.

“SKD members acting on behalf of the organisation, have encouraged, promoted, and glorified terrorist acts through online propaganda,” the report said. “SKD adheres to an ideology that is violently opposed to multi-ethnic Western societies and there is a possibility that a lone-actor attack directed or inspired by SKD could result in harm to Australians.”

Senator Paterson said although Australians were not directly involved in the group its “encouragement, promotion and glorification of lone actor attacks could inspire some Australian extremists, and the availability of SKD propaganda online has potential to contribute to the radicalisation of others”.“The committee encourages the government to continue investigating other like-minded organisations with a mind to listing them as terrorist organisations under the criminal code, if they meet the criteria.”Opposition legal affairs spokesman Mark Dreyfus, a member of the committee, said it was “troubling” it had taken so long for the government to list an extreme right-wing group.“As ASIO has told this Parliament time and time again, the threat posed by right-wing extremism to our country’s safety and to the safety of its people is very real and very serious and it’s growing,” he said.“We can see the dangers with our own eyes and read about it day after day in our newspapers. We’ve seen the images, and read the reports, of dozens of neo-Nazis openly burning crosses and chanting racist and anti-Semitic slogans at a popular Victorian tourist destination.”Other groups on the list include Al-Qaeda, Al-Shabaab and Islamic State.

ASIO director-general Mike Burgess said in March he had recommended to the government that other ideologically motivated extremist groups also be listed but suggested it decided they did not meet the legal definition.