Fury over Taliban event in Australia 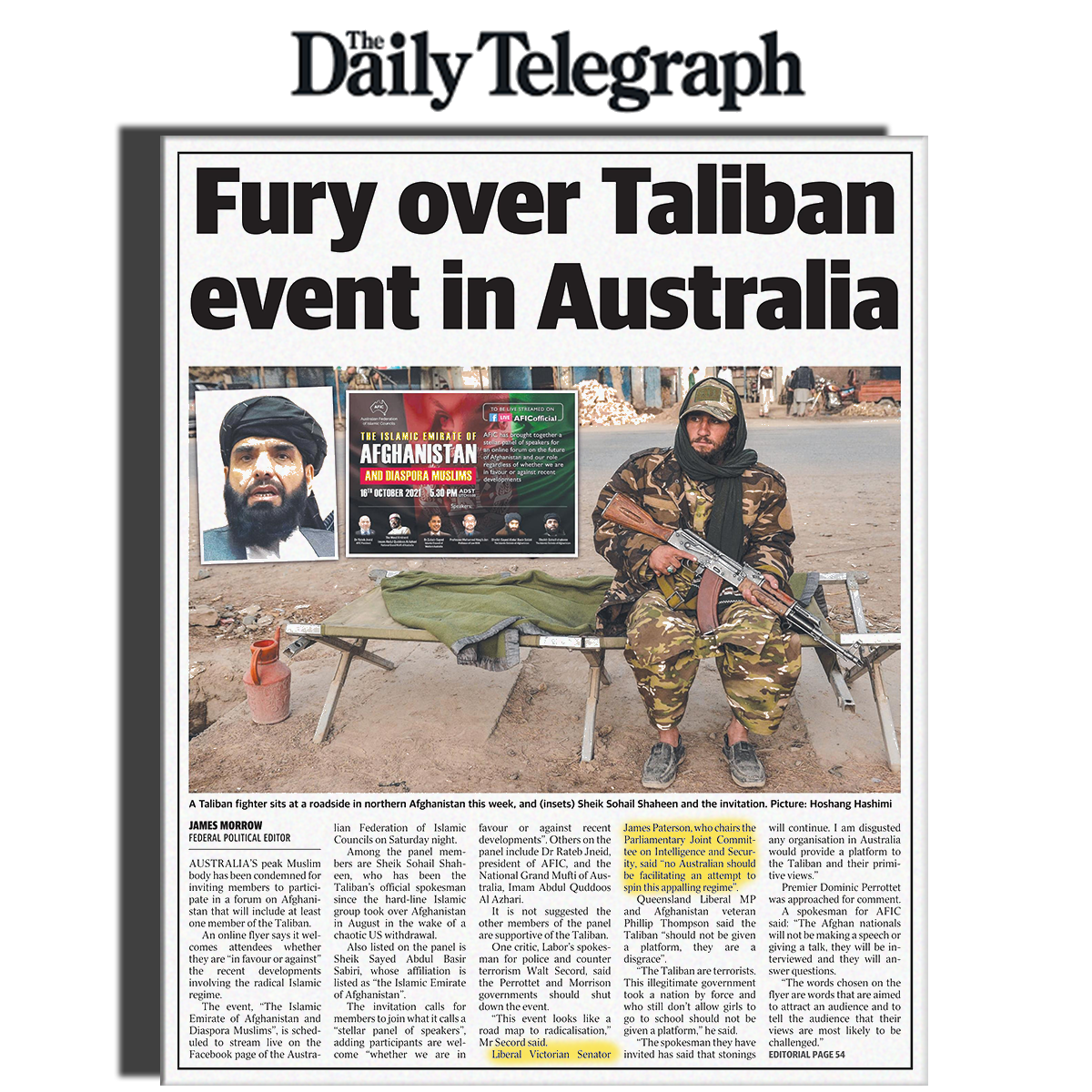 Australia’s peak Muslim body has been condemned for inviting members to participate in a forum on Afghanistan that will include at least one member of the Taliban with an online flyer that says it welcomes attendees whether they’re “in favour or against” the recent developments involving the radical Islamic regime.

The event, entitled, “The Islamic Emirate of Afghanistan and Diaspora Muslims”, is scheduled to be streamed live on the Facebook page of the Australian Federation of Islamic Councils Saturday night.

Among the panel members are Sheik Sohail Shaheen, who has been the Taliban’s official spokesman since the hard-line Islamic group took over Afghanistan in August in the wake of a chaotic US withdrawal.

Also listed on the panel is Sheik Sayed Abdul Basir Sabiri, whose affiliation is listed as “the Islamic Emirate of Afghanistan.”

The invitation calls for members to join what it calls a “stellar panel of speakers”, adding participants are welcome “whether we are in favour or against recent developments”, suggesting a level of local community support for the Taliban.

Others on the panel include Dr Rateb Jneid, president of AFIC, and the National Grand Mufti of Australia, Imam Abdul Quddoos Al Azhari.

“Given the massive sacrifice of not just Australia and our allies, but millions of local Afghans who stood up against the brutality of the Taliban, no Australian should be facilitating an attempt to spin this appalling regime,” said Liberal Victorian Senator James Paterson, who chairs the Parliamentary Joint Committee on Intelligence and Security.

“Australia does not recognise the legitimacy of the Taliban and neither should the organisers of this event,” he said.

His sentiments were echoed by Liberal Queensland MP and Afghanistan veteran Phillip Thompson.

“AFIC has done great work in the past with disaster relief, but I do think they’ve mis-stepped here,” he.

“The Taliban are terrorists. This illegitimate government took a nation by force and who still don’t allow girls to go to school should not be given a platform to discuss what they need from Australia or what they need from other Western countries.”

“We’ve heard the Taliban say they would allow free access in and out of the country, that is false, that there would be no reprisals, that is false too.

“The spokesman they have invited has said that stonings will continue. They should not be given a platform, they are a disgrace and an illegitimate government.”

“This event looks like a roadmap to radicalisation,” Mr Secord said.

“I am absolutely disgusted that any organisation in Australia would provide a platform to the Taliban and their primitive views.

“Make no mistake, this event is absolutely irresponsible and downright stupid.

“Last month, Cricket Australia cancelled the Afghanistan cricket team test match tour of Australia due to the Taliban’s refusal to allow women to play cricket. That is a principled stand on the views of the Taliban.

The Daily Telegraph has reached out to a number of Muslim community figures who suggested that AFIC should be focused on domestic issues and not, in the words of one, “trying to conduct foreign policy”.

A spokesman for AFIC said, “The words chosen on the flyer are words that are aimed to attract an audience and to tell the audience that their views are most likely to be challenged.

“The Afghan nationals will not be making a speech or giving a talk, they will be interviewed and they will answer questions.”