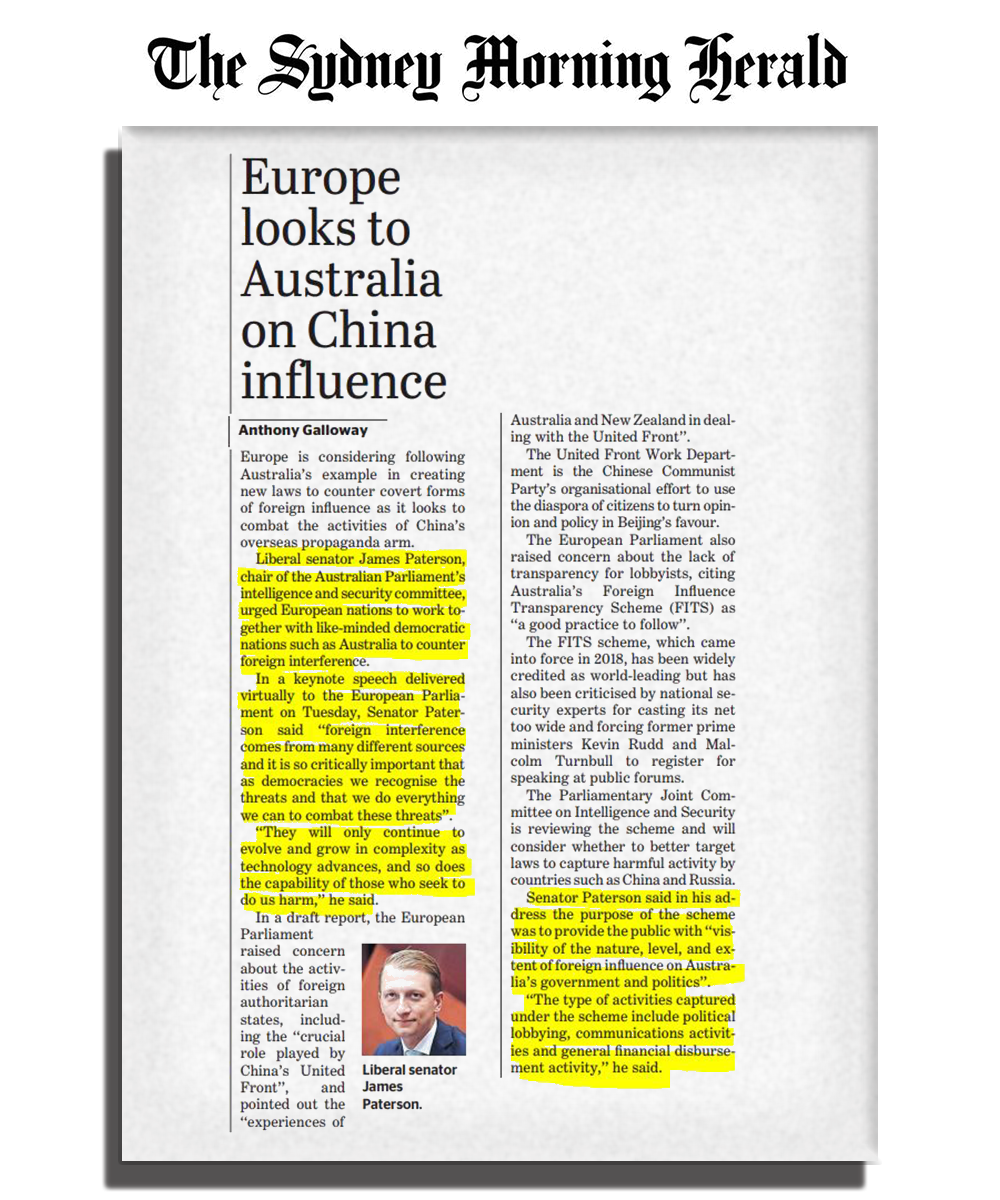 Europe is considering following Australia’s example in creating new laws to counter covert forms of foreign influence as it looks to combat the activities of China’s overseas propaganda arm.

Liberal senator James Paterson, chair of the Australian Parliament’s intelligence and security committee, urged European nations to work together with like-minded democratic nations such as Australia to counter foreign interference.

In a keynote speech delivered virtually to the European Parliament on Tuesday, Senator Paterson said “foreign interference comes from many different sources and it is so critically important that as democracies we recognise the threats and that we do everything we can to combat these threats”.

“They will only continue to evolve and grow in complexity as technology advances and so does the capability of those who seek to do us harm,” he said.

In a draft report, the European Parliament raised concern about the activities of foreign authoritarian states within the continent including the “crucial role played by China’s United Front”, and pointed out the “experiences of Australia and New Zealand in dealing with the United Front”.

The United Front Work Department is the Chinese Communist Party’s organisational effort to use the diaspora of citizens abroad to turn opinion and policy in Beijing’s favour.

The European Parliament also raised concern about the lack of transparency for lobbyists, citing Australia’s Foreign Influence Transparency Scheme as “a good practice to follow”.

The FITS scheme, which came into force in 2018, has been widely credited as being world-leading but has also been criticised by national security experts for casting its net too wide and forcing former prime ministers Kevin Rudd and Malcolm Turnbull to register for speaking at public forums.

The Parliamentary Joint Committee on Intelligence and Security (PJCIS) is currently reviewing the scheme and will consider whether to better target the laws to capture more harmful activity by countries such as China and Russia.

Senator Paterson said in his address the purpose of the scheme was to provide the public with “visibility of the nature, level, and extent of foreign influence on Australia’s government and politics”.

“Individuals or entities are required to register certain activities under the scheme if they are taken on behalf of a foreign principal,” he said. “The type of activities captured under the scheme include political lobbying, communications activities, and general financial disbursement activity.”

Senator Paterson also credited Australia’s decision in 2018 to “secure our digital sovereignty” by banning Chinese telco Huawei and other high-risk vendors with close connections to the Chinese government from the nation’s 5G mobile network technology in Australia.

“That year we also banned foreign political donations to Australian political parties after a series of scandals linked to Chinese-national donors,” he said.

“This is aimed at counteracting a strategy by authoritarian states, most notably China with its Belt and Road deal, to seek to divide us internally between different levels of government,” he said.