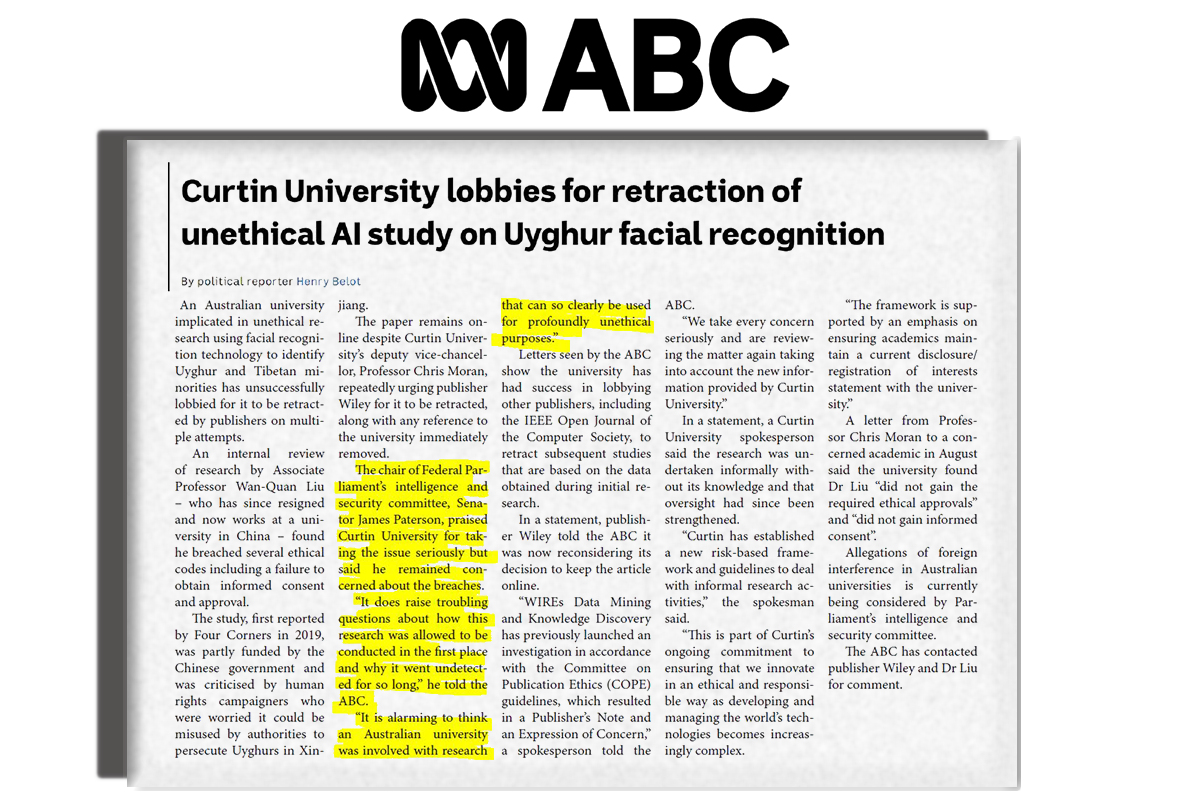 An internal review of research by Associate Professor Wan-Quan Liu – who has since resigned and now works at a university in China – found he breached several ethical codes including a failure to obtain informed consent and approval.

The study, first reported by Four Corners in 2019, was partly funded by the Chinese government and was criticised by human rights campaigners who were worried it could be misused by authorities to persecute Uyghurs in Xinjiang.

The paper remains online despite Curtin University's deputy vice-chancellor, Professor Chris Moran, repeatedly urging publisher Wiley for it to be retracted, along with any reference to the university immediately removed.

The chair of Federal Parliament's intelligence and security committee, Senator James Paterson, praised Curtin University for taking the issue seriously but said he remained concerned about the breaches.

"It does raise troubling questions about how this research was allowed to be conducted in the first place and why it went undetected for so long," he told the ABC.

"It is alarming to think an Australian university was involved with research that can so clearly be used for profoundly unethical purposes."

Letters seen by the ABC show the university has had success in lobbying other publishers, including the IEEE Open Journal of the Computer Society, to retract subsequent studies that are based on the data obtained during initial research.

In a statement, publisher Wiley told the ABC it was now reconsidering its decision to keep the article online.

"WIREs Data Mining and Knowledge Discovery has previously launched an investigation in accordance with the Committee on Publication Ethics (COPE) guidelines, which resulted in a Publisher's Note and an Expression of Concern," a spokesperson told the ABC.

"We take every concern seriously and are reviewing the matter again taking into account the new information provided by Curtin University."

In a statement, a Curtin University spokesperson said the research was undertaken informally without its knowledge and that oversight had since been strengthened.

"Curtin has established a new risk-based framework and guidelines to deal with informal research activities," the spokesman said.

"This is part of Curtin's ongoing commitment to ensuring that we innovate in an ethical and responsible way as developing and managing the world's technologies becomes increasingly complex.

"The framework is supported by an emphasis on ensuring academics maintain a current disclosure/registration of interests statement with the university."

A letter from Professor Chris Moran to a concerned academic in August said the university found Dr Liu "did not gain the required ethical approvals" and "did not gain informed consent".

Allegations of foreign interference in Australian universities is currently being considered by Parliament's intelligence and security committee.

The ABC has contacted publisher Wiley and Dr Liu for comment.