Claws out on security 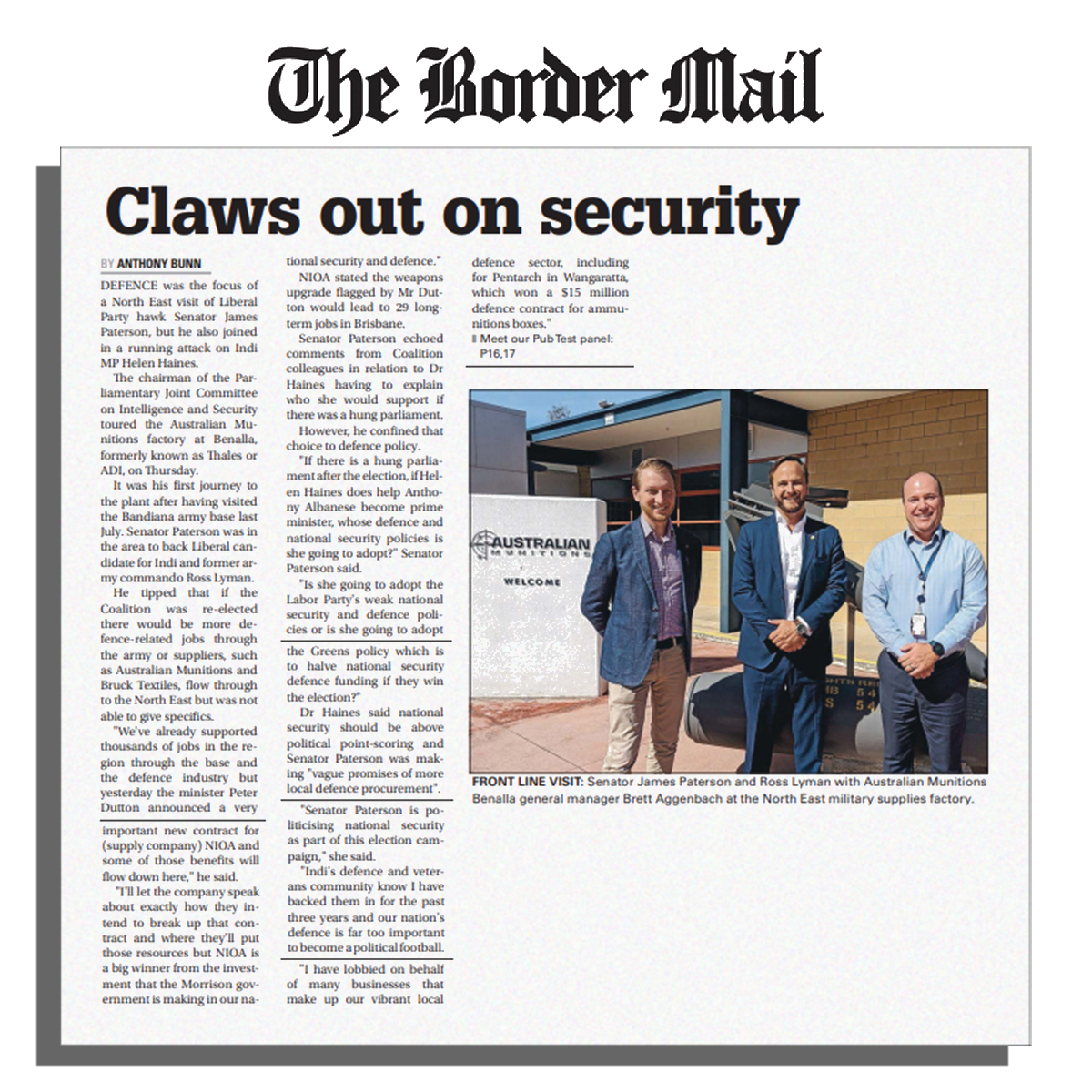 DEFENCE was the focus of a North East visit of Liberal Party hawk Senator James Paterson, but he also joined in a running attack on Indi MP Helen Haines.

The chairman of the Parliamentary Joint Committee on Intelligence and Security toured the Australian Munitions factory at Benalla, formerly known as Thales or ADI, on Thursday.

It was his first journey to the plant after having visited the Bandiana army base last July. Senator Paterson was in the area to back Liberal candidate for Indi and former army commando Ross Lyman.

He tipped that if the Coalition was re-elected there would be more defence-related jobs through the army or suppliers, such as Australian Munitions and Bruck Textiles, flow through to the North East but was not able to give specifics.

"We've already supported thousands of jobs in the region through the base and the defence industry but yesterday the minister Peter Dutton announced a very important new contract for (supply company) NIOA and some of those benefits will flow down here," he said.

"I'll let the company speak about exactly how they intend to break up that contract and where they'll put those resources but NIOA is a big winner from the investment that the Morrison government is making in our national security and defence."

NIOA stated the weapons upgrade flagged by Mr Dutton would lead to 29 long term jobs in Brisbane. Senator Paterson echoed comments from Coalition colleagues in relation to Dr Haines having to explain who she would support if there was a hung parliament.

"If there is a hung parliament after the election, if Helen Haines does help Anthony Albanese become prime minister, whose defence and national security policies is she going to adopt?" Senator Paterson said.

"Senator Paterson is politicising national security as part of this election campaign," she said.

"Indi's defence and veterans community know I have backed them in for the past three years and our nation's defence is far too important to become a political football.

"I have lobbied on behalf of many businesses that make up our vibrant local defence sector, including for Pentarch in Wangaratta, which won a $15 million defence contract for ammunitions boxes."