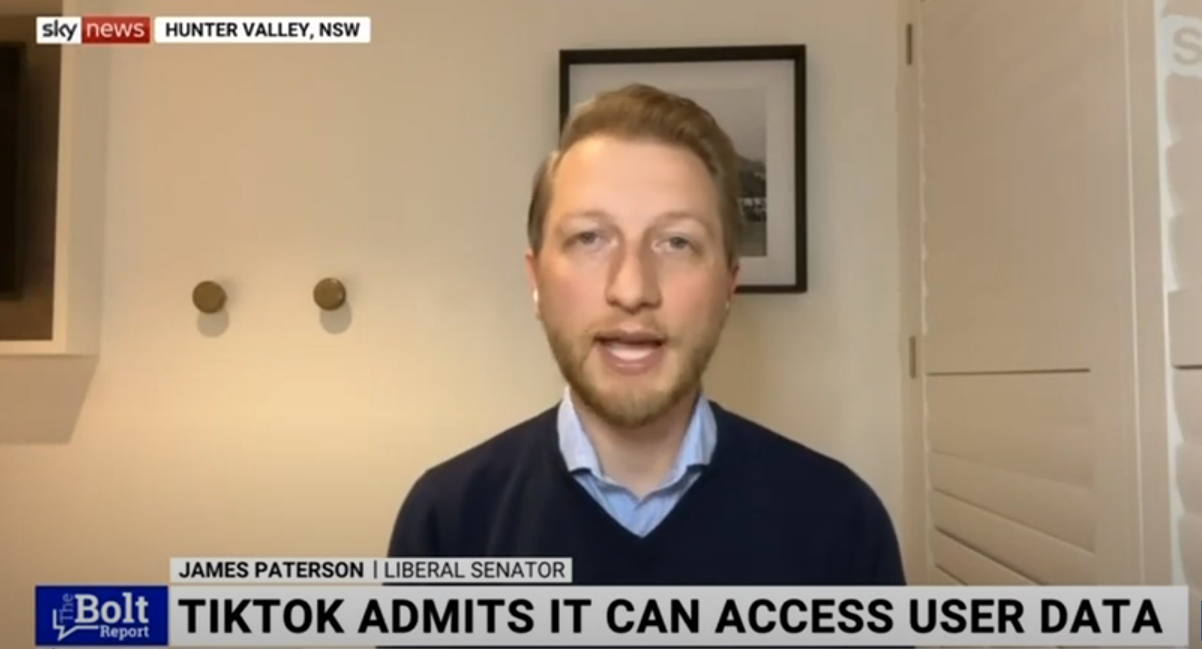 Interview with Andrew Bolt on The Bolt Report, Sky

ANDREW BOLT: Joining me is Senator James Paterson, the Liberal's Shadow Minister for Cyber Security. Senator Paterson, thank you so much for joining me. TikTok didn't tell us the truth, did it? What do we know now?

JAMES PATERSON: Andrew, it's very hard to see how TikTok was being completely upfront and honest with the Australian Parliament, with the US Congress or with the British House of Commons, because in each of those settings they told us that our user data was safe because our data would be stored on Western or friendly or aligned country servers. What they didn't tell us at the time was that while though it might have been stored there, it was going to be accessible in China. And we now know that for two reasons.

Firstly, BuzzFeed, three weeks ago published a leaked insider's account, a whistleblower account of the fact that there were master engineers in Beijing who have access to everything. And in response to that, a group of US senators wrote to TikTok in the United States and extracted that admission from them. And in Australia I wrote to TikTok Australia to seek the same clarification and they made the same admission; yes, although the data is stored in the United States and Singapore, it's accessible in China.

BOLT: That's extraordinary. Now, why should we worry about that? What information could China get and how could it use it?

PATERSON: There's two reasons we need to worry, Andrew. Firstly, anything that's accessible in China is accessible to the Chinese Communist Party. That's the case because all large Chinese businesses, particularly in the technology sector, are only allowed to exist if they serve the objectives of the Chinese Communist Party. And if that wasn't sufficient, China has also passed a series of national security laws, including their national intelligence law of 2017, which says it's the obligation of individual Chinese citizens and companies to assist the Chinese government in its intelligence work and never to tell anyone about it. So, it's quite possible that today, even TikTok itself doesn't know that its employees are secretly cooperating with Chinese intelligence agencies and providing information on Australian users. It's not just dangerous for individuals. If you were a Chinese political dissident on TikTok, that would be a very dangerous thing. It's a danger for our society at large because we have more than 7 million TikTok users in Australia. Many of them are young people and we know now that TikTok is harvesting on a mass scale, enormous amounts of information, unnecessary information on each of those users and they can use that information and the insight gained from that to very effectively interfere in our democracy and seek to bend it to their advantage.

BOLT: But how would they do that?

PATERSON: So, I'll give you a couple of examples, Andrew. Masses of biometric data is being collected on Western citizens. Massive amounts of data on our behavioural responses to the different inputs and stimuli we get on these apps is being collected. When you put all that through a quantum computer or when you apply artificial intelligence, you can learn about the ways in which Western publics respond to external stimuli. And that's a very valuable set of information for a Chinese national security agency, for example, in the People's Liberation Army technical operations, to think about how they could use these apps, which they now have the ability to broadcast on, to influence our democracy. It really is very frightening indeed.

PATERSON: You know, it's a fair question, Andrew. What we already know about TikTok is it is a platform which is friendly for and permissive for foreign state disinformation campaigns. We have identified a number of disinformation campaigns that have done very well on TikTok in particular. And one of the reasons why that might be the case, although we can't say for sure, is that TikTok, like all social media apps, uses an algorithm to decide what content is brought to the fore to show to its users. But it is an aided algorithm. It's an algorithm that has human inputs, and there are human beings within TikTok or its parent company of ByteDance who are choosing which things should come to the fore. So, for example, if you wanted to convince the Western public of an ill of a Western politician or of a particular cause or institution, you could elevate content which was critical of those things, even if it was false and based on disinformation. And you could reach millions of people and influence the way in which they think and ultimately how they vote.

BOLT: So, we could see a lot of cat videos on TikTok with all the cats saying don't vote for James Paterson because he's anti-Chinese.

PATERSON: Yes, we could. And we have seen censorship on this platform before, particularly when there's been content that's been critical of China's human rights record. It has disappeared from the platform. And we've seen, for example, fake influencers on behalf of authoritarian regimes. There was a recent example of a North Korean propagandist who was seeking to present a softer side of North Korea, who stunningly immediately became a viral sensation on TikTok and had millions and millions of views almost from nowhere. That kind of thing is very hard to understand how that could happen organically, without assistance. And the privacy and data security and cybersecurity concerns that I have about TikTok make all of those things easier on this platform.

BOLT: You know, people might laugh at TikTok, of course, but it's precisely when you don't think anyone would possibly be using something to mislead you that you're at your most vulnerable. James Paterson, thank you so much indeed for your time.