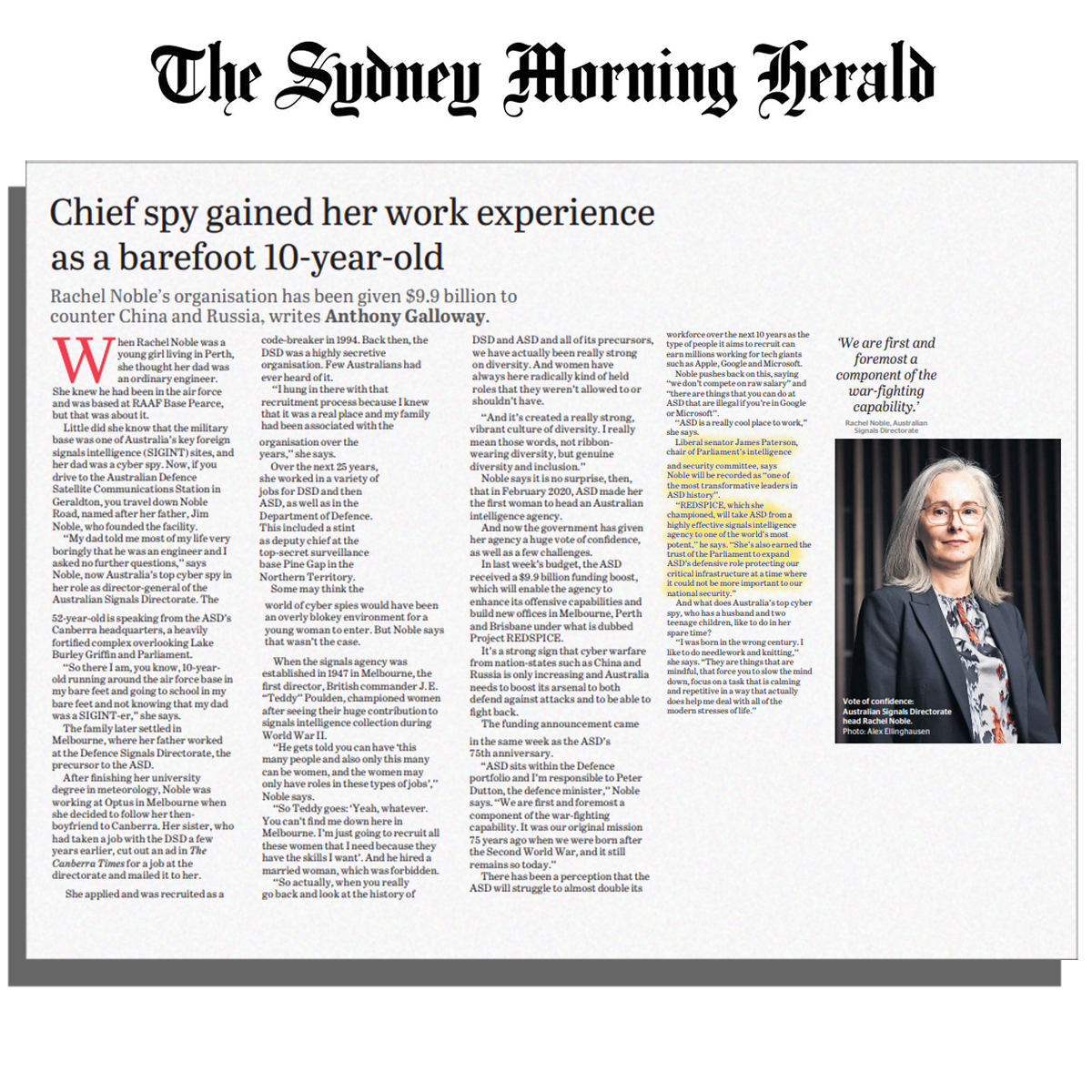 When Rachel Noble was a young girl living in Perth, she thought her dad was an ordinary engineer. She knew he had been in the Air Force and was based at RAAF Base Pearce, but that was about it.

Little did she know that the military base was one of Australia’s key foreign signals intelligence (SIGINT) sites, and her dad was a cyber spy. Now, if you drive to the Australian Defence Satellite Communications Station in Geraldton, you travel down Noble Road, named after her father, Jim Noble, who founded the facility.

“My dad told me most of my life very boringly that he was an engineer and I asked no further questions” says Noble, now Australia’s top cyber spy in her role as director-general of the Australian Signals Directorate (ASD). The 52-year-old is speaking to us from the ASD’s Canberra headquarters, a heavily fortified building complex overlooking Lake Burley Griffin and the nation’s Parliament.

The family then settled in Melbourne, where her father worked at the Defence Signals Directorate, the precursor to the ASD.

After finishing her university degree in meteorology, Noble was working at Optus in Melbourne when she decided to follow her then-boyfriend to Canberra. Her sister, who had taken a job with the DSD a few years earlier, cut out an ad in The Canberra Times for a job at the directorate and mailed it to her.

She applied and was recruited as a code breaker in 1994. Back then, the DSD was a highly secretive organisation. Few Australians had ever heard of it.

“I hung in there with that recruitment process because I knew that it was a real place and my family had been associated with the organisation over the years,” she says.

Over the next 2½ decades, she worked in a variety of jobs for DSD and then ASD, as well as in the Department of Defence. This included a stint as deputy chief at the top-secret surveillance base Pine Gap in the Northern Territory.

Some may think the world of cyber spies would have been an overly blokey environment for a young woman to enter. But Noble says that wasn’t the case.

When the signals agency was established in 1947 in Melbourne, the first director, British commander J.E. “Teddy” Poulden, championed women after seeing their huge contribution to signals intelligence collection during World War II.

“He gets told you can have ‘this many people and also only this many can be women, and the women may only have roles in these types of jobs’,” Noble says.

“So Teddy goes: ‘Yeah, whatever. You can’t find me down here in Melbourne. I’m just going to recruit all these women that I need because they have the skills that I want’. And, heaven forbid, he hired a married woman, which was forbidden.

“So actually, when you really go back and look at the history of DSD and ASD and all of its precursors, we have actually been really strong on diversity. And women have always here radically kind of held roles that they weren’t allowed to or shouldn’t have.

“And it’s created a really strong, vibrant culture of diversity. And look, I really mean those words, not ribbon-wearing diversity, but genuine diversity and inclusion.”

Noble says it is no surprise, then, that in February 2020, ASD made her the first woman to head an Australian intelligence agency.

And now the government has given her agency a huge vote of confidence, as well as a few challenges.

In last week’s budget, the ASD received a $9.9 billion funding boost, which will enable the agency to enhance its offensive capabilities and build new offices in Melbourne, Perth and Brisbane under what is dubbed Project REDSPICE.

It’s a strong sign that cyber warfare from nation-states such as China and Russia is only increasing and Australia needs to boost its arsenal to both defend against attacks and be able to fight back.

The funding announcement came in the same week as the ASD’s 75th anniversary.

“ASD sits within the Defence portfolio and I’m responsible to Peter Dutton, the defence minister,” Noble says. “We are first and foremost a component of the war-fighting capability. It was our original mission 75 years ago when we were born after the Second World War, and it still remains so today.”

There has been a perception that the ASD will struggle to almost double its workforce over the next 10 years, with the type of people it aims to recruit able to earn millions working for tech giants such as Apple, Google and Microsoft.

She pushes back on this, saying “we don’t compete on raw salary” and “there are things that you can do at ASD that are illegal if you’re in Google or Microsoft”.

“ASD is a really cool place to work,” she says.

Liberal senator James Paterson, chair of Parliament’s intelligence and security committee, says Noble will go down as “one of the most transformative leaders in ASD history”.

“REDSPICE, which she championed, will take ASD from a highly effective signals intelligence agency to one of the world’s most potent,” he says. “She’s also earned the trust of the Parliament to expand ASD’s defensive role protecting our critical infrastructure at a time where it could not be more important to our national security.”

And what does Australia’s top cyber spy, who has a husband and two teenage children, like to do in her spare time?

“I was born in the wrong century. I like to do needlework and knitting,” she says. “They are things that are mindful, that force you to slow the mind down, focus on a task that is calming and repetitive in a way that actually does help me deal with all of the modern stresses of life.”