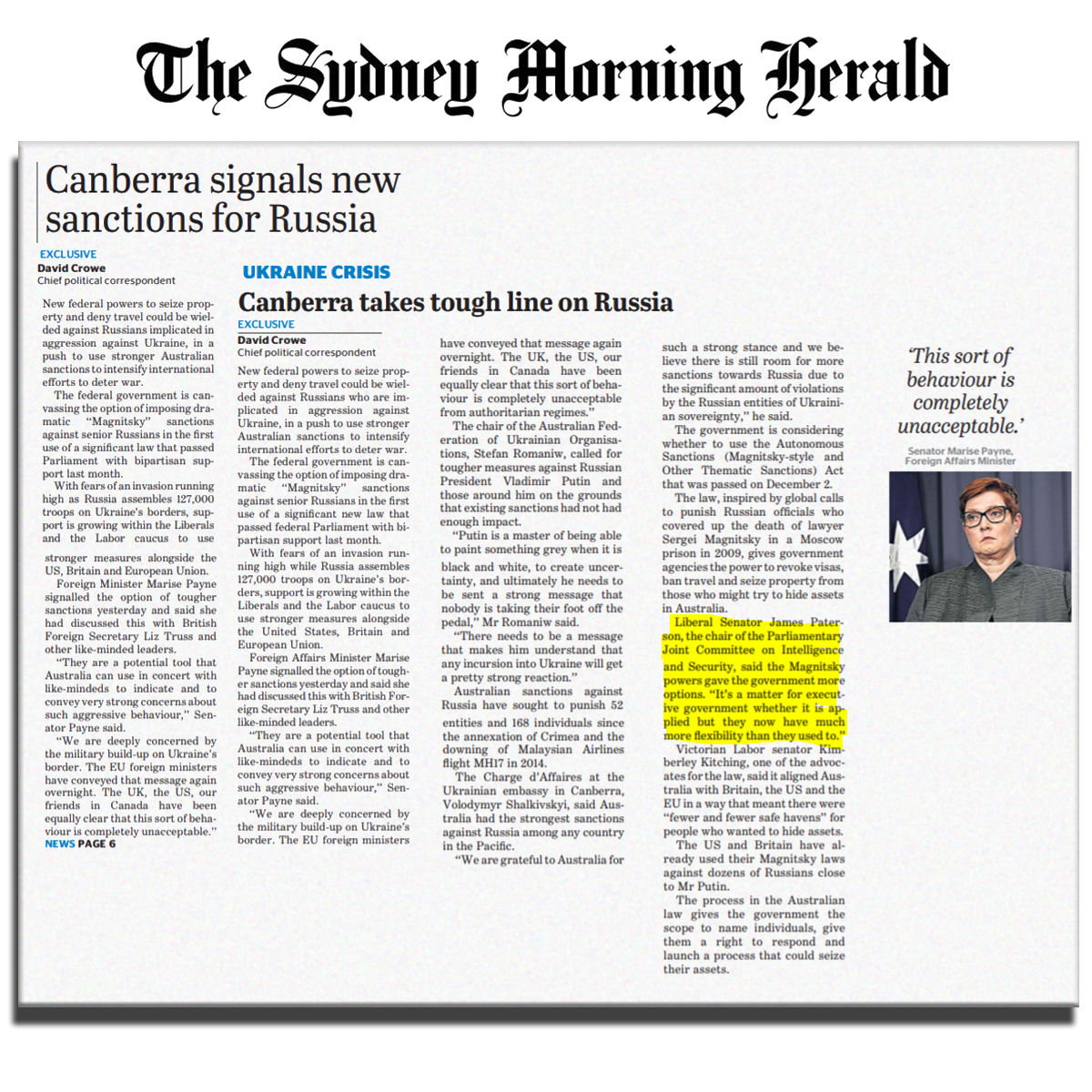 New federal powers to seize property and deny travel could be wielded against Russians who are implicated in aggression against Ukraine, in a push to use stronger Australian sanctions to intensify international efforts to deter war.

The federal government is canvassing the option of imposing dramatic “Magnitsky” sanctions against senior Russians in the first use of a significant new law that passed Federal Parliament with bipartisan support last month.

With fears of an invasion running high while Russia assembles 127,000 troops on Ukraine’s borders, support is growing within the Liberals and the Labor caucus to use stronger measures alongside the United States, Britain and European Union.

Foreign Minister Marise Payne signalled the option of tougher sanctions on Tuesday and said she had discussed this with British Foreign Secretary Liz Truss and other like-minded leaders.

“They are a potential tool that Australia can use in concert with like-mindeds to indicate and to convey very strong concerns about such aggressive behaviour,” Senator Payne said.

“We are deeply concerned by the military build-up on Ukraine’s border.

“The EU foreign ministers have conveyed that message again overnight. The UK, the US, our friends in Canada have been equally clear that this sort of behaviour is completely unacceptable from authoritarian regimes.”

The chairman of the Australian Federation of Ukrainian Organisations, Stefan Romaniw, called for tougher measures against Russian President Vladimir Putin and those around him on the grounds that existing sanctions had not had enough impact.

“Putin is a master of being able to paint something grey when it is black and white, to create uncertainty, and ultimately he needs to be sent a strong message that nobody is taking their foot off the pedal,” Mr Romaniw said.

“There needs to be a message that makes him understand that any incursion into Ukraine will get a pretty strong reaction, and unless he gets that I think we are going to have constant debates like we have at the moment.”

Australian sanctions against Russia have sought to punish 52 entities and 168 individuals since the annexation of Crimea and the downing of Malaysian Airlines Flight MH17 in 2014.

The Chargé d’Affaires at the Ukrainian embassy in Canberra, Volodymyr Shalkivskyi, said Australia had the strongest sanctions against Russia among any country in the Pacific.

“We are grateful to Australia for such a strong stance and we believe there is still room for more sanctions towards Russia due to the significant amount of violations by the Russian entities of Ukrainian sovereignty,” he said.

The government is considering whether to use the Autonomous Sanctions (Magnitsky-style and Other Thematic Sanctions) Act that was passed on December 2.

The law, inspired by global calls to punish Russian officials who covered up the death of lawyer Sergei Magnitsky in a Moscow prison in 2009, gives government agencies the power to revoke visas, ban travel and seize property from those who might try to hide assets in Australia.

Liberal Senator James Paterson, the chair of the Parliamentary Joint Committee on Intelligence and Security, said he was pleased the government had the option of using the Magnitsky powers.

“It’s a matter for executive government whether it is applied but they now have much more flexibility than they used to have,” he said.

Victorian Labor senator Kimberley Kitching, one of the advocates for the law, said it aligned Australia with the UK, the US and the EU in a way that meant there were “fewer and fewer safe havens” for people who wanted to hide assets.

“I would expect the government to be looking closely to where Australia can act in concert with allies against those who would not only threaten the sovereignty of another country but also global peace and security,” she said.

The US and UK have already used their Magnitsky laws against dozens of Russians close to Mr Putin. The process in the Australian law gives the government the scope to name individuals, give them a right to respond and launch a process that could seize their assets.