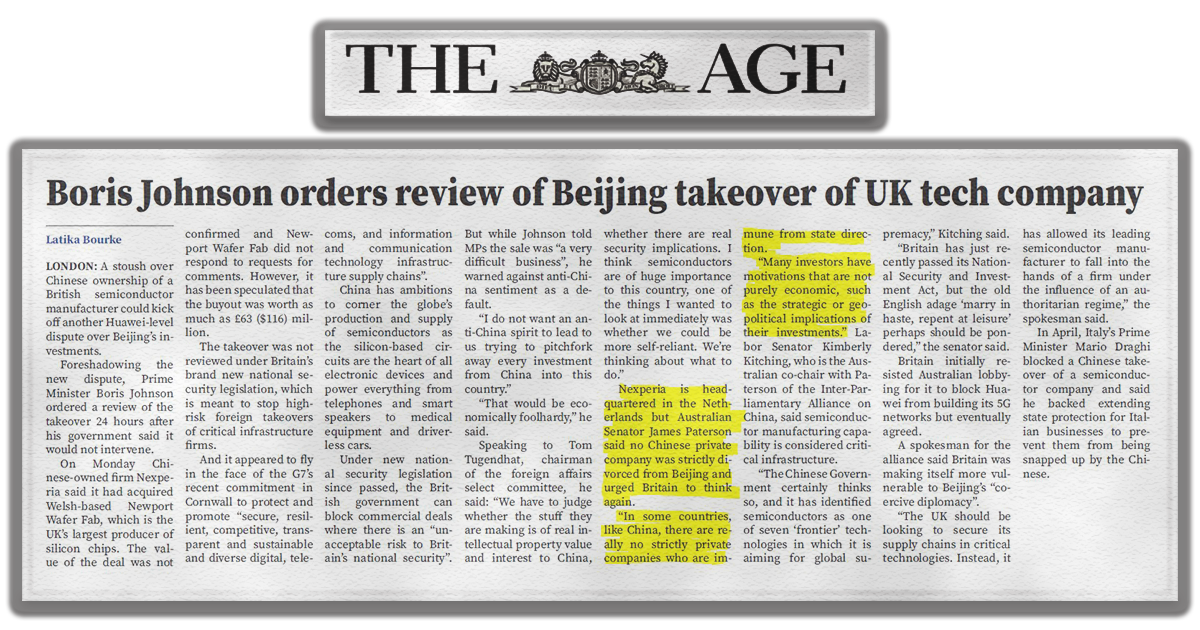 London: A stoush over Chinese ownership of a British semiconductor manufacturer could kick off another Huawei-level dispute over Beijing’s investments.Foreshadowing the new dispute, Prime Minister Boris Johnson ordered a review of the takeover 24 hours after his government said it would not intervene.On Monday Chinese-owned firm Nexperia said it had acquired Welsh-based Newport Wafer Fab, which is the UK’s largest producer of silicon chips. The value of the deal was not confirmed and Newport Wafer Fab did not respond to requests for comments.

However, it has been speculated that the buyout was worth as much as £63 ($116) million.

The takeover was not reviewed under Britain’s brand new national security legislation, which is meant to stop high-risk foreign takeovers of critical infrastructure firms.

And it appeared to fly in the face of the G7’s recent commitment in Cornwall to protect and promote “secure, resilient, competitive, transparent and sustainable and diverse digital, telecoms, and information and communication technology infrastructure supply chains”.China has ambitions to corner the globe’s production and supply of semiconductors as the silicon-based circuits are the heart of all electronic devices and power everything from telephones and smart speakers to medical equipment and driverless cars.Under new national security legislation since passed, the British government can block commercial deals where there is an “unacceptable risk to Britain’s national security”.But while Johnson told MPs the sale was “a very difficult business”, he warned against anti-China sentiment as a default.“I do not want an anti-China spirit to lead to us trying to pitchfork away every investment from China into this country.”“That would be economically foolhardy,” he said.Speaking to Tom Tugendhat, chairman of the foreign affairs select committee, he said: “We have to judge whether the stuff they are making is of real intellectual property value and interest to China, whether there are real security implications. I think semiconductors are of huge importance to this country, one of the things I wanted to look at immediately was whether we could be more self-reliant. We’re thinking about what to do.”Nexperia is headquartered in the Netherlands but Australian Senator James Paterson said no Chinese private company was strictly divorced from Beijing and urged Britain to think again.

“In some countries, like China, there are really no strictly private companies who are immune from state direction.

“Many investors have motivations that are not purely economic, such as the strategic or geopolitical implications of their investments.”Labor Senator Kimberly Kitching, who is the Australian co-chair with Paterson of the Inter-Parliamentary Alliance on China, said semiconductor manufacturing capability is considered critical infrastructure.“The Chinese Government certainly thinks so, and it has identified semiconductors as one of seven ‘frontier’ technologies in which it is aiming for global supremacy,” Kitching said.

“Britain has just recently passed its National Security and Investment Act, but the old English adage ‘marry in haste, repent at leisure’ perhaps should be pondered,” the senator said.

Britain initially resisted Australian lobbying for it to block Huawei from building its 5G networks but eventually agreed.A spokesman for the alliance said Britain was making itself more vulnerable to Beijing’s “coercive diplomacy”.“The UK should be looking to secure its supply chains in critical technologies. Instead, it has allowed its leading semiconductor manufacturer to fall into the hands of a firm under the influence of an authoritarian regime,” the spokesman said.In April, Italy’s Prime Minister Mario Draghi blocked a Chinese takeover of a semiconductor company and said he backed extending state protection for Italian businesses to prevent them from being snapped up by the Chinese.