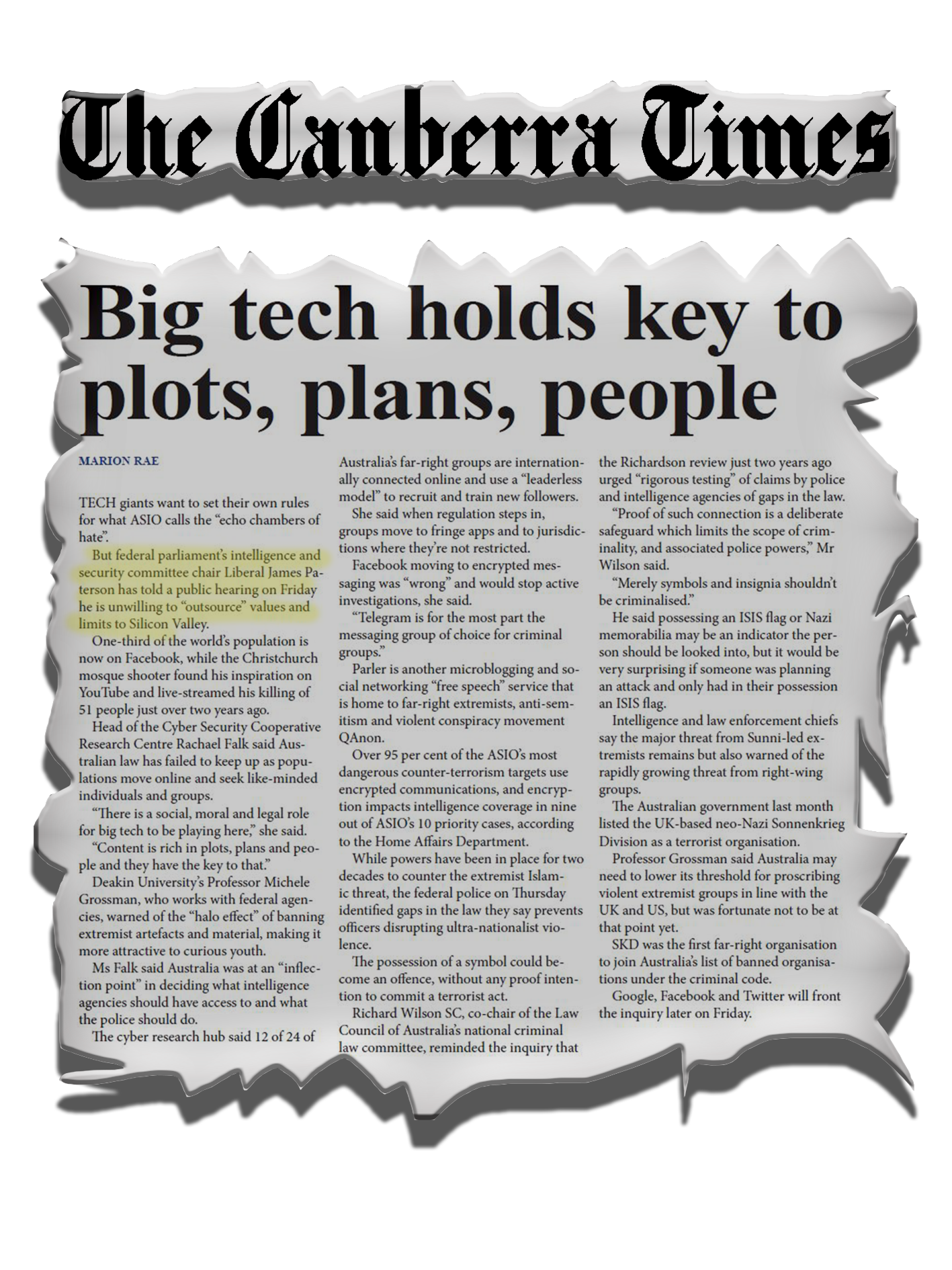 Tech giants want to set their own rules for what ASIO calls the "echo chambers of hate".

But federal parliament's intelligence and security committee chair Liberal James Paterson has told a public hearing on Friday he is unwilling to "outsource" values and limits to Silicon Valley.

"It is a constant challenge," Facebook's head of policy in Australia Josh Machin said.

One-third of the world's population is now on Facebook, while the Christchurch mosque shooter found his inspiration on YouTube and live-streamed his killing of 51 people.

"We intensified that work significantly after our services were abused by a coordinated group of bad actors as part of the horrific terrorist attack in Christchurch two years ago," Mr Machin said.

"We've designated more than 250 white supremacist organisations globally, including in Australia," he said.

Since implementing new rules on violent extremism four years ago, she said Twitter had assessed 269 organisations, half of which advocated violence against civilians alongside some form of white supremacist ideology and taken action against 200.

But Ms Reen warned "blunt force" instruments like an official ban stopped communities from interrogating and questioning ideas on an open platform and risked pushing people into hidden areas.

"It will make it worse," she said.

She said there were more than 300 platforms where Australians could easily go, and was also concerned state-based actors were complicating the threat environment.

The Australian Federal Police's recommendation to criminalise insignia and symbols such as the swastika was welcomed by Google .

"That would provide us with legal certainty," Google's government affairs and policy head Samantha Yorke said.

Ms Yorke said Google and its YouTube subsidiary had more than 20,000 people looking at evolving threats and every piece of content, regardless of official terrorist designations by governments.

Facebook said they weren't waiting for government regulation and already designated groups linked to terrorism. They also act on insignia and symbols.

"It allows us to move more quickly and address a wider range of organisations than those designated by democratic governments," said Facebook's counter-terrorism expert Brian Fishman, giving evidence from California.

"These actors will find places to put their content up," he said.

In the past year, Facebook has prohibited holocaust denialists and acted against conspiracy theorists QAnon and militarist movements.

Head of the Cyber Security Cooperative Research Centre Rachael Falk said there was a social, moral and legal role for big tech.

"Content is rich in plots, plans and people and they have the key to that."

Ms Falk said Australia was at an "inflection point" in deciding what intelligence agencies should have access to and what the police should do.

Facebook moving to encrypted messaging was "wrong" and would stop active investigations, she said.

The cyber research hub found 12 of 24 of Australia's far-right groups are internationally connected online and used a "leaderless model" to recruit and train new followers.

"These companies have had 15 years to demonstrate they can be corporate citizens and put self-regulation in place," Liberal committee member Julian Leeser said.

But Deakin University's Professor Michele Grossman, who works with federal agencies, warned of the "halo effect" of banning extremist artefacts and material, making it more attractive to curious youth.

Intelligence and law enforcement chiefs say the major threat from Sunni-led extremists remains but also warned of the rapidly growing threat from right-wing groups who are actively recruiting in Australia.

Richard Wilson SC, co-chair of the Law Council of Australia's national criminal law committee, reminded the inquiry that the Richardson review just two years ago urged "rigorous testing" of claims by police and intelligence agencies of gaps in the law.

"Proof of such connection is a deliberate safeguard which limits the scope of criminality, and associated police powers," Mr Wilson said.

He said it was "overkill" to criminalise ownership and possession of extremist flags and symbols.